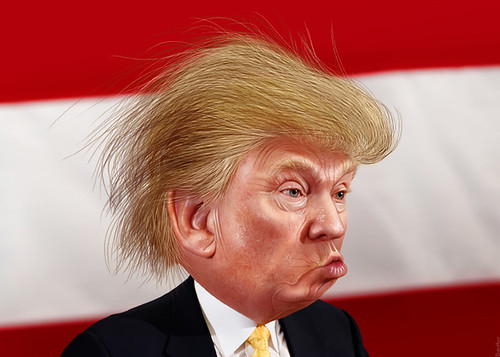 Donald J. Trump was a builder of casinos and high-priced hotels and golf courses. Now he is a builder of a tower of contradictions for the American people that is making “America Great” at their expense.

Now in the White House, he proceeds to push programs and policies that contradict many of his promises. He is ballooning an already massive, bloated military budget by cutting the health and safety budgets of consumer, environmental and labor regulatory agencies and housing and energy assistance. Reportedly he wants to cut one billion dollars out of the budget of the Centers for Disease Control that works to detect and prevent global epidemics! Just today, the Congressional Budget Office announced that under the proposed Republican Health Plan, 24 million people will lose health care by 2026. Apparently he is oblivious to the perils of Avian Flu, SARS, Ebola and Zika threatening our national security and the health and lives of millions of people.

There is more to this emerging betrayal. Trump is supporting Republican Speaker of the House Paul Ryan’s “you’re on your own, folks” devastating health insurance plan. Slash and burn Ryan, comfortably fully insured by the taxpayers, publicly admits he doesn’t know how many people will lose their health insurance. Imagine the impact of strip-mining Medicaid on the poor – nearly 70 million, including many children, are on that program. Runaway Ryan even fantasizes over going after Medicare next and corporatize it.

Republicans such as Mick Mulvaney, the new director of Trump’s Office of Management and Budget, argue that these measures are necessary for “efficiency.” Yet neither Trump, nor Mulvaney, nor Ryan, nor Senate Majority Leader Mitch McConnell have ever gone after $60 billion in business fraud on Medicare each year. The Congressional Government Accountability Office’s (GAO) reports ten percent of all health care spending is drained away by computer billing fraud and abuse. That would be about $340 billion this year alone – an estimate considered rock bottom by the nation’s leading expert on health care billing fraud – Professor Malcolm Sparrow of Harvard University!

It gets nuttier. Trump wants to increase the budget of the sprawling Department of Homeland Security but cut the budget of the US Coast Guard (which is part of the Department) and whose budget is already strapped in safeguarding our coastlines (See David Helvarg’s engrossing book, Rescue Warriors, which describes the Coast Guard’s often unsung missions).

Trump seems unwilling to oppose the more extreme “mad dogs” among the Congressional Republicans who want to erase the budgets for legal services for the poor (150 corporate law firms last week signed a letter saying they support maintaining the budget for legal services for the poor), public broadcasting and the National Endowments for the Arts and Humanities. The total number of dollars for all these programs is about $1 billion annually, or one thirteenth the cost of another redundant air craft carrier (we already have twelve in service—more active service carriers than the rest of the world combined).

Moreover, this self-touted “voice of the people” is instead placing in the highest government positions the “voices” of Wall Street billionaires. Next door to his Oval Office is Gary Cohn, former Goldman Sachs boss, a supposedly smart man who just mimicked Trump by absurdly claiming “we have no alternative but to reinvest in our military and make ourselves a military power once again.” Who in the world doesn’t think US Empire, bristling with arrays of weapons of mass destruction and able to immediately destroy far weaker adversaries in the air, on the sea and land is not a military power?

Wall Street and the mega-wealthy now run the Treasury Department, the State Department, and the Department of Education while corporatists and militarists run other major departments and agencies. Where are the people’s voices in that plutocratic park?

As the opposition coalesces in their resistance to various measures pushed by Trump’s tantrums, it is interesting to note the surprising diversity of those challenging President Trump. More than a few corporate leaders are appalled by extreme Trumpism and their opposition is not restricted to the destabilizing bill to replace Obamacare or to Silicon Valley.

Sure, corporate CEOs are tempted by the tax cuts and jettisoning of some regulations. But they know they are making record after-tax profits, record corporate after-tax pay for themselves, and the stock market is soaring. As they watch the growing rumble from the people in street demonstrations and at Congressional town meetings, there is building a little foreboding.

They’re thinking – why rock the boats (or yachts) – Trump is taking away what people already have – their health insurance – and their health and safety protections while the Republicans plan to continue depressing their vote and rigging the electoral districts by gerrymandering. When a society, blocked from advancing justice, is unraveling what fair play there remains, the corporate bosses, who see beyond tomorrow, get worried, for good reason.

The tower of contradictions, being constructed by Trump and the most extreme Republican Party in its history, won’t be camouflaged or distracted for long by provocative, prevaricating 3:00 am tweets from the White House.

Ralph Nader Denounces Trump Budget as Corporatist, Militarist & Racist: “The Mask is Off”

http://democracynow.org – Longtime consumer advocate and former presidential candidate Ralph Nader responds to President Donald Trump’s 2018 budget proposal to Congress, which calls for an unprecedented $54 billion increase in military spending while slashing environmental, housing, diplomatic and educational programs. “The mask is off. The fangs are now out,” Nader says. “He is collaborating with what is, on the record, the most vicious, ignorant Republican Party in its history, since 1854.”