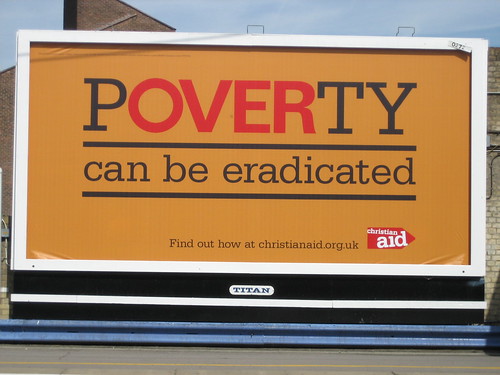 Poverty blights the lives of billions of people throughout the world: in developing countries, where it is acute, and industrialised nations, where it’s hidden but growing. It rises out of social injustice, makes exploitation and abuse inevitable, brings death and disease, robs people of opportunity and dignity, feeds anger and resentment.

Much like the rubbish that litters the streets of our cities, the poor, destitute and hungry are swept out of sight. Their existence is an embarrassment to politicians and sits uncomfortably within the shiny materialistic image promoted by cities and countries eager to attract ‘inward investment’.

As more jobs become obsolete due to new technology and the closure of traditional industries, unemployment is set to rise, incomes disappear, and, unless there is a radical reappraisal of the economic environment, poverty levels will rise, perhaps exponentially. In fact, with wages stagnant many of those now living in poverty are actually in work – the ‘working poor’ – trying to survive on a pittance, many of whom cannot feed themselves without the support of food banks.

The World Bank claims that in 2013 almost 767 million people (11% of the global population) were living in extreme poverty – defined as income of $1.90 a day. However, a study by the UK’s Overseas Development Institute (ODI) found that more than 2.5 billion people are living “on less than $2 per day.” That’s $2 a day for all living costs; it’s not ‘spending money’. Raise the ‘poverty’ bar to a more realistic $5 a day (the cost of two cups of coffee in a developed country), and over four billion people (two thirds of humanity) slide into the net.

Poverty equals illness and hunger, lack of self-worth and abuse. It is the single greatest cause of death and condemns people to live hopeless lives of relentless hardship. At the same time those born into wealthy families are blessed with opportunities, security and comfort: Simple gifts – rights in fact – that should be the inheritance of every child no matter where or to whom they are born.

Countries may be rich or poor, but the world is bountiful. People starve because they’re poor not because of a shortage of food: there is an abundance of food. The continuing existence of poverty in a world of plenty, a world connected and interdependent as never before, is a crime against our collective humanity. Poverty, together with extreme inequality, should be ended completely and consigned to the past.

Re-designing how we live

The coming Age of the Machine is part of a new time, and offers unprecedented possibilities to re-design the way we live.

Technological innovation will we are told, destroy more jobs than it creates; a development that within the existing economic system engenders fear, but it should be welcomed. Human beings will be liberated from lives of drudgery, allowing time and space to explore life, to examine what it means to be human, to be creative and to collectively redefine what civilization can be. But, as Yanis Varoufakis, Professor of Economic Theory at the University of Athens (former finance minister of Greece) makes clear, in order for everyone to benefit from these opportunities, “every citizen must be granted property rights over part of the wealth that the machines produce.” This requires a completely new approach to how we think about the economy and the way it operates.

The present model – whilst it can boast of successes – is ill equipped to respond to the challenges and opportunities of the time and must go. Materialistic values are built into the system; selfishness, desire and excess promoted, and (speaking generally throughout) whilst philanthropy is part of some corporate strategies, presented with the choice of saving lives but losing money, administrators side with the money. Such is the inherent cynicism and inhumanity that exists within and is promoted by the pervasive paradigm.

Fundamental change has been needed for some time; the Advance of Automation adds one more imperative to the process. A new, sustainable, humane economic model is required worthy of the 21st Century and beyond. A new system charged with meeting human need and safeguarding the environment, and as Yanis Varoufakis says that “conceives of investment in people’s communities; we also need to establish the right to a Universal Basic Income.”

A basic right to life’s requirements

The Revolution in Work requires an Evolution in Living: a new approach, in which the acknowledgment that humanity is one is primary. We are Brothers and Sisters of One Humanity, and the systems that govern our lives should be based on and encourage the realization of this fact. Sharing as a principle that animates human affairs naturally follows such an understanding and when pragmatically applied will allow everyone to live dignified lives free from the fear of poverty. Everyone is entitled to the means required to meet their needs, irrespective of whether they have a job and income or are unable to secure either; quality homes, good health care and inspiring education.

Within the existing paradigm the Imminent Revolution presents us with what Varoufakis describes as a “major dilemma”. Either a world in which the concentration of ownership over the new means of production becomes even more intense, leading “to a stagnating capitalism with [more] extreme inequality and huge incomes for a shrinking percentage of the population, that live behind electrified barriers in privately policed communities, whilst the rest exist in a cesspool of volatility, uncertainty and social misery.”

Or we can move in another direction, “post democracy – post social democracy”, – post ideology per-se. A society in which the means of living – presently money – is freely, unconditionally available to everyone, machines are the servants of humanity and all reap the rewards of their labour.

For the good to be made manifest, a new model is required that redistributes – shares – the “ownership of the means of production”, or at least [ensures] the means of production is redistributed in such a way as to effectively guarantee freedom…this requires a basic income, which is essential.” A Universal Basic Income (UBI) made up either of regular payments or some form of Inheritance Trust – currently only available in wealthy families –, set up to cover the needs of everyone from birth.

The recognition that everyone has a Right to the basic requirements for living goes back to the 18th century. And towards the end of the First World War Bertrand Russell outlined a plan which contained the embryonic idea of UBI and included the suggestion that the amount be varied depending on work “which the community recognizes as useful…when education is finished, no one should be compelled to work, and those who choose not to work should receive a bare livelihood and be left completely free.”

The link with community work is important and should be incorporated into any new system. However, ‘payments’, whether monetary or a sophisticated credit scheme, should not be conditional on such activities. Social engagement will naturally grow from a just economic system that recognizes humanity’s underlying unity.

In the decades since Russell’s proposals, UBI in some form has been attracting increasing interest. Currently various countries are considering UBI: Finland has initiated a two-year trial to pay 2,000 randomly chosen unemployed citizens a basic monthly income, irrespective of whether they find work or not; Scotland is about to pilot a “radical” UBI scheme in two of its local authorities. Glasgow (where it’s estimated a third of children live in poverty) and Fife, because, Councilors say, “it is the best way to tackle poverty”. And perhaps surprisingly, India, where over a third of the poorest people on Earth live, is looking at UBI. Payments would be made to every child and adult, and would guarantee “all citizens enough income to cover their basic needs [and] would promote social justice.”

In its current form UBI is not the answer, but it could form an important part of a new progressive economic-social model, and the fact that it is being widely discussed is positive.

Whether ‘payments’ are made in monetary terms or through a new ‘social market,’ as Varoufakis calls it, in which throughout life, everyone is “endowed with capital from society,” UBI would liberate the poor from “vicious welfare-state means testing and the trap of inter-generational poverty”; it would offer “the economic stability that most people are losing” and create a “platform on which they could stand before reaching out for something better.”

In addition to establishing financial security, endowing everyone with the means to meet their needs would have a range of additional benefits. It would demonstrate that the collective society is a compassionate and just one and show that all people are valued equally. Inequality would fade, as would the consequential social ills. Competition would lose its hold, replaced by cooperation, which would become the norm, as would tolerance and trust.

Fear of destitution, exploitation and hunger would be driven from the Earth and the value system under which we live would radically change.

This is not an unattainable utopian vision. It is the realistic picture of a world in which humanity responds creatively and pragmatically to the changes that technology presents us with. It is a positive image, predicated on the recognition of humanity’s essential unity. This realization is crucial if we are to bring about lasting change, and create the conditions for peace; as Yanis Varoufakis states, the question is “do we consider our community to be an extended family of humanity or not?”

Basic income – too basic, not radical enough by Michael Roberts

10 thoughts on “Universal Basic Income–Not The Answer, Yet But Needs To Be Discussed by Graham Peebles”