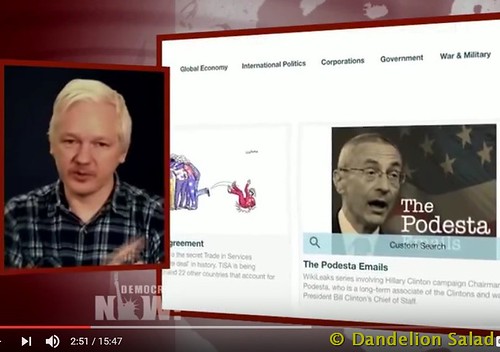 Just before the Democratic National Convention last July, WikiLeaks published 20,000 internal emails from the Democratic National Committee. Then, between October 7 and Election Day, WikiLeaks would go on to publish 20,000 of Clinton campaign chair John Podesta’s emails, generating a rash of negative stories about the Clinton campaign. Intelligence agencies have pinned the email hacking on Russians. WikiLeaks maintains Russia was not the source of the documents.

http://democracynow.org – In March, WikiLeaks published what it says is the largest leak of secret CIA documents in history. The thousands of documents, dubbed “Vault 7,” describe CIA programs and tools that are capable of hacking into both Apple and Android cellphones. The documents also outline a CIA and British intelligence program called “Weeping Angel,” through which the spy agency can hack into a Samsung smart television and turn it into a surveillance device that records audio conversations, even when it appears to be off. For more, we speak with the founder of WikiLeaks, Julian Assange.

http://democracynow.org – In releasing the trove of DNC and Podesta emails during the 2016 campaign, was WikiLeaks staying true to its radical transparency mission by refusing to engage in partisan politics? Or was WikiLeaks recklessly bolstering the Trump and the Republicans? For more, we speak with activist and journalist Allan Nairn and WikiLeaks founder Julian Assange.