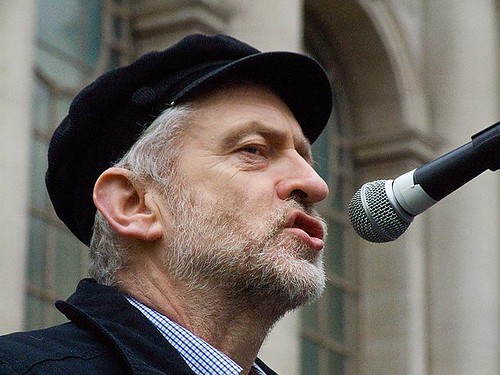 As Britons go to a general election next month, the Labour Party under Jeremy Corbyn has set out its manifesto offering the electorate a clear choice for socialism.

It’s a brave move, given that the party has not been polling well and its leader is continually vilified in the British media for being a “loony lefty”.

But it’s not just a brave move. It is the correct, strategic move too. For too many years, Britain’s Labour has been a pale imitation of the Conservative Party, aping its neoliberal capitalist policies, while trying to present a “human face”. In such a contest, the imitator will usually come second, or merely act as a surrogate.

That doomed direction of so-called “new” Labour was charted by Tony Blair and his Blairite acolytes who are still strong with the party. Jeremy Corbyn, who has been an MP for over 30 years, comes from the more traditional socialist base of the party. His launch of the party’s manifesto last week is a return to a staunch, unapologetic socialist program.

There is an analogy here to what is occurring in France. The ruling Socialist Party there under the presidency of Francois Hollande is only “socialist” in name. On economic and social policy it implemented neoliberal capitalist policies over the past five years and then ended up being repudiated by angry French voters.

However, the self-destruction of the Socialist Party in France is a blessing in disguise. For it gets rid of political charlatans and creates the space for the reinvention of a genuinely socialist movement. That movement is now underway under the leadership of Jean-Luc Mélenchon and his French Unbowed party. Mélenchon’s manifesto was a categorical rejection of neoliberal capitalism and a call for a progressive wealth redistribution in an overtly socialist program. Mélenchon’s vote count (nearly 20 per cent) in the French presidential election was a remarkable achievement under the confusing circumstances, and it bodes well for future success.

The same goes for Britain. Since Corbyn took over the Labour Party leadership he has steered it back from the Blairite “neoliberal lite” policies, to rediscover its historic role as a defender of working people, with a commitment to wealth redistribution from progressive taxation and to building up public services. This rediscovery of a genuine socialist political alternative in Britain under Corbyn is the only way for the party to succeed. Imitating the Conservatives is not just wrong in principle, it is a strategic dead-end. It may take Corbyn’s Labour time to make the breakthrough into government. It may lose this forthcoming election next month, but there comes a point when a resolute stand for political principle and vision must be made.

As with France’s Mélenchon, Corbyn is confidently making the case for socialism. Both leaders are spelling out that the neoliberal capitalism which has prevailed over the last three decades across Western countries is an unmitigated social disaster. Only a clear-eyed socialist can make this argument convincingly. Half-baked, “third way” type apologetics from the Blairites or the Hollandes are doomed to fail.

And the thing is that the great majority of people are willing to respond to the socialist call if presented to them with candor and confidence. Everybody knows that neoliberal economic austerity for the masses is a cruel failure, that the chasm between rich elite and poor majority is not just a moral affront, it is socially unsustainable – for everyone. Mélenchon got a strong mandate from French voters who rallied to his socialist vision; unlike the ruling Socialists of Hollande who were roundly rejected for having sold-out. Even in the United States, socialist politics could have made a historic breakthrough in its presidential election there last year if Bernie Sanders hadn’t been sabotaged by the Democratic Party. Recall how there was a groundswell of support in the US for Sanders, where Americans despite decades of anti-communist brainwashing were actually shouting for “socialism”.

Jeremy Corbyn has rejuvenated the Labour Party in Britain among young voters especially. Many of them are now saying that at last they have a party to vote for, one that gives them a clear choice from the Conservatives. His manifesto of increasing taxes on the wealthy and corporations to pay for a “transformation” in health, education, housing and jobs is a winner for the majority of people. Polls just out show that the Labour manifesto is popular, according to the Independent.

On foreign policy, Corbyn is saying that Labour will reject the overseas militarism that the Conservatives and his Blairite predecessors pursued. The days of “bomb first, talk later” are over, he says. Labour is calling for a genuine “ethical foreign policy” one which rejects following US-led wars. The party is promising to cancel arms exports to Saudi Arabia, which Britain under the Conservatives has been heavily arming in its aggression on Yemen and Bahrain. These policies also resonate well with ordinary Britons who are furious at the warmongering record of recent British governments and their kowtowing to both Washington and Saudi Arabia.

So, why has Labour not polled well up to now, and why is Corbyn mocked as an incompetent leader?

Part of Labour’s demise is due to the fatal direction that the party took under Tony Blair and his successors, Gordon Brown and Ed Miliband. Corbyn is re-positioning the party as a full-throated socialist alternative. It will take time to bear electoral fruit.

There is also the Brexit factor. The ruling Conservatives are seen as pro-Brexit, a direction which resonates with a lot of Britons, including working-class communities. Prime Minister Theresa May called this general election on June 8 earlier than scheduled in order to strengthen her negotiating hand with Brussels over the Brexit. For many voters who are in favor of leaving the European Union, there is strong incentive to vote for the Conservatives, even though on wider economic and social policy these same voters are opposed to the neoliberal hardships.

Another factor is the formidable British establishment and its media arsenal doing everything to demonize Corbyn, precisely because he is positioning the Labour Party as a direct threat to their wealth and privileges. The media campaign denigrating Corbyn on a daily basis by virtually all news outlets in Britain is bound to have a negative influence on public perception, as a letter to the Guardian by nearly 100 media academics pointed out. And yet British politicians have the audacity to lecture Russia among other places for allegedly suppressing political opponents.

Nevertheless, despite the immense challenges, Labour under Corbyn has at last a real chance of shaping Britain’s political future. This is because it is standing for something real instead of creeping in the shadows of opponents.

The issue is much, much bigger than playing party politics. It’s about existential questions and answers on the future of society, indeed the world.

Capitalism is a disaster, both on national and international relations. It is destroying society, at home and abroad. British Conservative defense minister Michael Fallon scoffed at Corbyn’s proposal to cancel weapons sales to Saudi Arabia, on the grounds that the Saudis are “important trading partners” and they have the “right to self-defense in Yemen”. The Conservatives have also pilloried Corby over his opposition to using nuclear weapons against Russia. Can you believe the insanity? Seriously, such “rulers” are as stupid as they are unscrupulous, they should be facing prison time.

The ruinous legacy of capitalism is becoming more apparent to more people across Britain and indeed across the entire world day by day. Sooner or later, the vast majority of people will realize – are realizing – that a real alternative to bankrupt, planet-destroying, warmongering capitalism must be seized. And this real alternative is socialism – the democratic control of resources to create a peaceful, sustainable and decent world, fit for all human beings to live in.

Whether Corbyn’s Labour wins in the British election next month is perhaps not the real priority. Of course, winning power eventually is the goal. And, who knows, maybe this time. But the goal is not merely winning elections for winning sake, as Blair, Hollande and all the other pseudo-socialists have done in the past, and for what? Only to discredit socialism with futile betrayals.

No, the priority is to stand for the right, viable politics in order to overcome the urgent challenges at this point in history.

The leader of the Labour Party outlined the key national security and foreign policy positions upon which his party is contesting the UK general election.