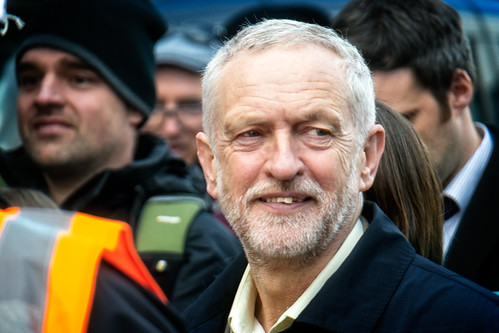 Despite the unrelenting assault on Corbyn by the media and the Conservatives, Labour’s message for change is gaining traction. To his great credit Corbyn has not sunk to the level of exchanging insults, has shown great dignity when attacked and has focused on criticising policies not individuals.

The latest polls estimate Labour has reduced the Torie’s lead from 22% to 5% or even 3%, depending on which pollster one reads. If this is accurate and reflects the final vote it would result in a hung parliament, which would be a tremendous achievement for Labour. A hung parliament describes a parliament in which no single party has an absolute majority of seats. Interestingly, such a state of affairs is also known as a balanced parliament.

The more people hear about Labour’s policies and see Corbyn, the more support for Labour grows. And why wouldn’t it: Labour has designed a set of rational proposals that, if made manifest, would transform Britain from a nation suffocating under a blanket of austerity and injustice, to a fairer country in which public services – including schools and hospitals – are properly funded and where everyone is valued. Conversely as more details emerge about Theresa May – who is by all accounts a narrow-minded control freak – the less appealing, she and her fanatical cohorts become.

The Labour manifesto is filled with light and energy. All areas of responsibility are dealt with from early years education and the environment to foreign policy, health care and of course the economy. It is a manifesto designed to repair the severe damage caused by a brutal Conservative government that is literally destroying the country piece by piece. It is a manifesto and a Labour leadership many of us have been waiting years for. The party and its policies are more or less in tune with the worldwide movement for change, and is a positive development, not just for Britain, but for the world.

“We will measure our economic success not by the number of billionaires, but by the ability of our people to live richer lives.” Income tax would increase for some, but “no rises in income tax for those earning below £80,000 a year and no increases in personal national insurance contributions or the rate of VAT.” Major investment in infrastructure and essential public services – decimated under the Conservative’s crushing and needless austerity programme. A National Transformation Fund, similar to Germany and the Nordic countries, would be set up to “invest £250 billion over 10 years in upgrading our economy.” Energy systems would be transformed with investment in “state-of-the-art low-carbon gas and renewable electricity production,” and, encouragingly, they plan to “ensure that 60 per cent of the UK’s energy comes from zero-carbon or renewable sources by 2030.” Fracking – the source of a major greenhouse gas – would be banned. Corbyn, a life-long peace activist and founding member of Stop The War, would appoint a Peace Minister.

Common-sense proposals include, bringing private rail companies (many of which are owned by foreign governments) back into public ownership, renationalising Royal Mail and gradually forming a publicly owned decentralised energy system. University tuition fees, which have gone from £3,000 a year to £9,000 under the Conservatives, would be scrapped, a hand of friendship extended to refugees and migrant workers. A unified National Education Service (NES) for England would be set up, “to move towards cradle-to-grave learning that is free at the point of use,” and “free, lifelong education in Further Education (FE) colleges, enabling everyone to up-skill or retrain at any point in life.” Unions would be welcomed back into the workplace, the minimum wage increased to £10 per hour, zero hours contracts and unpaid internships banned, and a maximum pay ratio between workers and Directors/CEO’s of 20-1 introduced (currently the gap can by ten times this or more).

The rental housing market, which is currently completely out of control, will be regulated so people have security in their home and rents they can afford. There are plans for a National Care Service, wide-ranging mental health provision, increased funding for the police and fire services (the Conservatives have cut 10,000 fire-fighter jobs and closed dozens of fire stations throughout the country), support for the NHS, changes to Legal Aid. No additional prisons will be privatised (it’s scandalous that any have been), 3,000 new prison officers will be recruited, art education in schools encouraged and funded, and a new national Culture Fund established.

Vitality and the language of optimism, cooperation and fairness, wash through every section. In the midst of the rise of right-wing politics, worldwide turmoil and uncertainty, the policies articulated offer real hope and stand out as a chance for renewal and social justice in a world where these democratic ideals are in short supply.

Apathy says ‘politicians are all the same, nothing ever changes’; well this is nonsense and always has been, it’s a weak excuse for democratic irresponsibility. In this upcoming election the differences between the Conservatives and Labour are defined and stark; its importance cannot be overstated, the magnitude of the choice is immense, the responsibility on us all, great. Everyone must vote, particularly those under 30 years of age, who routinely don’t bother. If, as the polls suggest, we end up with a hung parliament, Conservative extremism would be held in check, debate and cooperation encouraged. If, and it’s a big if, Labour takes it, the atmosphere and direction of the country would be changed immeasurably for the good, and the World would have taken a small, but enormously significant step in the right direction.

Corbyn: War on Terror is not Working – We Need a New Solution

Kam Sandhu of Real Media UK, says that Corbyn has opened up a conversation in the UK that many people want to have but they have been under siege with ongoing terror attacks.

UK Election Polls Tighten to Three Points Between May and Corbyn

Tom Barlow, co-founder of Real Media, talks about how Britain’s June 8 general election race is tightening between Labour and Tories and how the mainstream British media is losing credibility in the process.