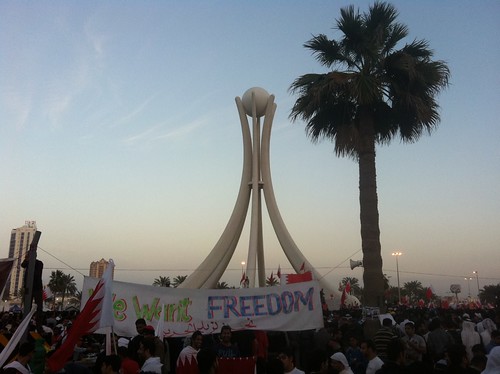 “It is appropriate to think of Bahrain as a large, open-air prison with the Al Khalifa family acting as prison guards, thus protecting the US Fifth Fleet from the annoyance of the local population which might desire to engage in managing their own society,” Mark Mason from San Francisco told the Tasnim News Agency.

Following is the full text of the interview:

Tasnim: On May 23, Bahraini forces raided the village of Diraz, which has been under a military siege for almost a year, and stormed into the home of Sheikh Isa Qassim, the spiritual leader of Bahrain’s Shiite majority. Regime forces killed at least five demonstrators, wounded dozens and arrested over 280 people during the crackdown. What’s your take on the assault?

Mason: Bahrain is a tiny monarchy located on the east coast of the Arabian Peninsula that functions as a subject client state of the US Empire. Beginning in 1995, the US Naval Fifth Fleet has been stationed in Bahrain. Prior to the US facility in Bahrain, the British Navy was present beginning in the late nineteenth century. From the British Empire collapse after World War II, the US began assuming regional colonial presence in the Persian Gulf. The US government favors monarchies and other forms of autocratic state power because, as a global empire, control over the local population is facilitated by harsh, repressive government. It is appropriate to think of Bahrain as a large, open-air prison with the Al Khalifa family acting as prison guards, thus protecting the US Fifth Fleet from the annoyance of the local population which might desire to engage in managing their own society. Thus, sadly, the people of Bahrain are captive in the global power struggle to control oil. We can expect more abuse of human rights in Bahrain. All pretense of human rights has been discarded in both Bahrain and Saudi Arabia in the interest of making a few people very rich and keeping the imperial boss happy. The Pearl Monument, constructed in 1982 was destroyed by the Bahrain government in 2011. The monument represented civic unity and pride. As prisoners of the Bahraini and US governments, all pretense of civil society is gone.

Tasnim: The deadliest raid in years occurred two days after US President Donald Trump publicly assured Bahrain’s king that their relationship would be free of ‘strain’ during his first official overseas trip. Following the visit, the Saudi regime also began a clampdown on its own people in the Shiite-populated Qatif region. Do you believe that Trump has given the green light to Wahhabist regimes in the region to start a fresh crackdown on Shiites? Please explain.

Mason: President Trump, as all US presidents do, is looking for money and power. Oil is money and power, thus Trump is looking to control oil and to make some cash selling weapons. The US government fears democratic independent nationalism. The US government favors irrational and brutal cults because they are easy to control, and they act as efficient cops stirring up chaos and fear among the local population. As in Ukraine, Somalia, Sudan, Brazil, and Venezuela, US foreign policy is to destabilize local governments and social institutions. Presidents Carter and Reagan, facilitated by the Saudi government, initiated financial support for violent jihadist groups in the region. The expected result has been violent chaos, previously quite limited, but now regionally and internationally expanded, with current focus associated with ISIS in Iraq and Syria, President Trump’s recent visit to Saudi Arabia suggests that US foreign policy in the region has not changed.

Tasnim: We know that the Middle East region has been suffering from years of insecurity, bloodshed, clashes and unrest. During his visit to Riyadh, Trump, however, signed an arms deal worth $110 billion with the Saudis, despite warnings he could be accused of being complicit in the regime’s war crimes in neighboring Yemen. What do you think about the deal and the ongoing aggression against the impoverished Arab country in the holy month of Ramadan?

Mason: Much of the Middle East and South Asia are under US imperial domination. I cannot document the number and extent of US war crimes in this region. Too many. Let us keep in mind that there is no money in peace. If peace were the path to profits for US transnational corporations, the Middle East would experience peace tomorrow. US foreign policy is driven by imperial domination, theft of natural resources and local labor, and ultimately by the insatiable drive of capitalist corporations to increase profits for corporate investors. Yemen is not under full US control and it is not hostile to Iran. That is the great political problem for Yemen. The US has committed war crimes in Yemen. Human suffering and destruction of infrastructure have been accomplished directly, through bombing and drone missile strikes, and indirectly through the sales of arms to Saudi Arabia followed by logistical military support for Saudi attacks on Yemen. Selling weapons to the Saudis maintains the US petrodollar by recirculating Saudi cash back into the US economy, and it does so by enriching US war munitions manufacturers —and ultimately the American plutocracy— the people who matter. As for the meaning of military arms sales and violence during Ramadan, I will leave that query for others to enlighten me.

The UN has declared a humanitarian crisis in Yemen as the war impinges on health care services and food supplies. The combination of US, Saudi, and UAE (United Arab Emirate) military violence inflicted upon the Yemeni people includes the destruction of food production and storage facilities. Famine and the collapse of essential social institutions is imminent. One child dies every ten minutes in Yemen, according to UNICEF.

It is my opinion that the way out of regional militarism is to rebuild the UN Non-Aligned Movement for the purpose of supporting a military arms embargo in the Middle East. Regional conflicts can only be resolved in a humane and rational manner through diplomacy. The USA now knows only gunboat diplomacy, which is no diplomacy at all. The US is the schoolyard bully we all knew. The way to defeat a bully is to build solidarity among the bullied. No irony should be lost on the fact that global powers are struggling over the control of oil, a substance that is destroying the habitat upon which our very survival depends. We would be wise to pause from local strife to consider why we allow a fiction, money, to control our destiny.

Zainab Alkhawaja: We’re living in a country where the criminals are the most powerful people

How Absurd Can It Get? US-UK Defending Dictatorships by Finian Cunningham

Bahrain Regime Waging War On Its Own People by Finian Cunningham