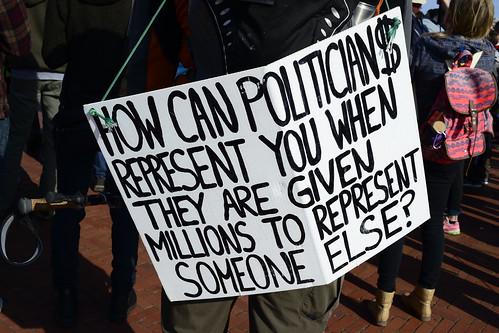 Imagine a country run along truly democratic lines. In such a mythical land, what would be the role of the politician, and the nature of his or her relationship with that amorphous group paraded under the banner: ‘the people’?

We in pseudo-democratic countries hear a lot about politicians serving and honouring the ‘will of the people’ – in Britain this nauseating slogan of appeasement has been repeated ad infinitum since the disastrous European referendum vote – but from where does the supposed conviction of the masses arise? Does it evolve from independent minds tussling with questions of justice and freedom, debating and discussing pertinent issues over tea and cake, or is it the politicians who construct this perceived will; manipulating the people they claim to serve into believing what they, the politicians, want them to believe. And whilst on occasions there may be some degree of uncertainty in the success of the Project of Persuasion – ‘the people’ can sometimes be an annoyingly unpredictable bunch – every avenue of propaganda and control is employed to ensure that the ideological intentions of the political class are reflected in the will of the people as and when they place their sacred X, and exercise their long-fought-for democratic right, which (particularly in first past the post systems) carries little authority and even less autonomy.

The principle tool of inducement is of course the mainstream media: Television and radio stations, newspapers and magazines are used to flood the minds of the populous with a certain view of life, particular ideas, values and carefully edited ‘facts’. Political and economic slogans are repeated like mantras over the airwaves, until they infect the populous and are repeated parrot-like by apathetic, ill-informed voters. Education systems are designed to support the message, enabling the most malleable minds to be conditioned into, for example, competition and conformity. Organised religion reinforces the pervasive values and imposes its own, often cripplingly repressive doctrine on the faithful. Creative independent thinking – the principle quality of enquiry, analysis and response – is for the most part lost within the fogs of dogma and stereotype that are wrapped around the minds of the unsuspecting virtually from birth. The world is presented as hostile, competitive, full of pain and difficulties. Material satisfaction and pleasure is sold as happiness, desire constantly fed – creating agitated noisy minds, discontent and anxiety, all of which deny or greatly inhibits the possibility of that most democratic quality, free thinking.

Individuality has been perverted, championed and denied. Within a conformist society where the pressure to think, act, and be a certain way is all-pervasive, true individuality – the natural flowering of innate potential within an environment of cooperation, understanding and tolerance, free from fear – is restricted and only realised through strength and often brings exclusion. And so the ‘will’ of individuals, their ability to think beyond the rhetoric, to see the false as the false and the true as the true, becomes constrained at best, easily manipulated and, or, non-existent.

Many are awake to this, young and old see the injustices, the pretence and invasion for what they are. They are angry, and long for an alternative way of living. Huge numbers have been marching in cities throughout the world demanding change and to be listened to. The response of the ruling elite has been fierce resistance, often violent. Ever more repressive policies, austerity and the like have been imposed, wages effectively lowered, costs increased; life made even more difficult, physically exhausting and emotionally draining; insecurity intensified, hope denied. Despite this assault there is a global movement of solidarity evolving, and with the energy of the time flowing with increasing strength, the citadel of resistance cannot be sustained indefinitely; true democracy, a social construct that we have idealised but not lived, will win the day, greatly changing the role of the politician and the type of people who become public representatives.

Democracy is participation; as are social responsibility, freedom of expression and social justice, tolerance and mutual understanding – all are inherent in the democratic ideal and constitute its primary colours. Where these are absent, so too is democracy; likewise, without a well educated, engaged population, democracy remains a fantastical construct of the elite, its principles periodically displayed for public appeasement and sustained self-deceit. In the absence of democracy, politicians, living in a suited bubble of complacency and privilege – two interwoven vices of self-deception ­– become ideological enforcers and persuaders. Divorced from the public at large, aligned with corporate interests and consistently duplicitous, trust in governments and politicians is at an all-time low; these men, and women, of power are rightly seen as cynical and ambitious, prepared to say anything to achieve positions of power and to hold on to them.

If complacency is the poison of the political class, then apathy and ignorance are the Achilles heel of the people. Social responsibility and participation sit at the very heart of the matter – participation by well-informed people who recognise that we are all individually responsible for society, for the well-being of our neighbours at home and abroad, and the integrity of the natural environment. Participation in how the place in which we live and work functions; participation founded on a sense of responsibility leading to and demanding, by dint of commitment and creative participation, influence.

Within such an environment the role of the politician changes dramatically; it becomes one of listening, facilitating, informing and enacting, of representing – making known – the ‘will of the people’ to the business community and parliament – which is of course what they should do now but on the whole, don’t. In this democratic paradigm, self-interest and corporate power begin to weakenn and the will of the people to evolve. Democratic decisions about policies and methods, the clarifying of aims, the nature of systems and structures in such a world would be reached through overwhelming consensus – not the paltry 51% of perhaps a mere 45% of the population, as is the case now.

Under the existing democratic paradigm the talk is of power and control, duplicitous politicians and leaders and disenfranchised citizens. The rhetoric of political debate is combative and dishonest, ideologies and ideals clash, the economy dominates and business largely dictates government policy. Socio-economic systems have been designed and developed to deny the manifestation of real democracy and to facilitate the perpetuation of the status quo: A state of affairs in which piece by piece the natural environment is being destroyed, half the world’s population is living on less than $5 a day, economic inequality is at unprecedented levels and 65 million people are displaced. To name but the most pressing issues facing humanity.

True democracy is an expression of the brotherhood of man. For this to develop and reflect the proclaimed ideal, systemic change and a fundamental shift in attitudes is required, both by politicians and the people who they are supposed to represent. This will not come from the political class, they are quite happy with things the way they are and will fight to the last; it will, and must come from the people. The worldwide protest movement contains within it the evolutionary seeds of lasting change, but as the reactionary forces resist with increasing force, the need for sustained engagement and collective participation grows stronger. As Maitreya has made clear, “nothing happens by itself, man must act and implement his will”. When the nature of that will – the will of the people – is based on the recognition of mankind’s essential unity, together with the acknowledgment that we are responsible for the world and all life within it, then all becomes possible.

Critical Thinking: A Bridge to the Future, Part 5 by Arthur D. Robbins