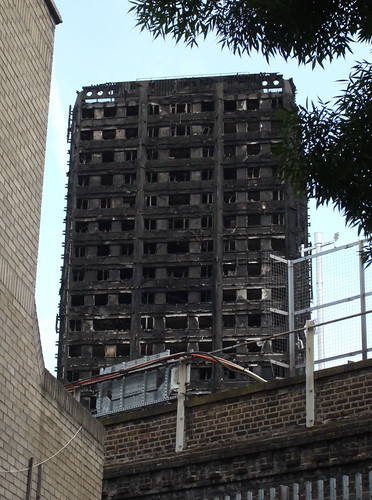 ‘The Prime Minister, Theresa May, had to [flee] the site of Grenfell Tower yesterday under police guard, BBC News, 17 June 2017

The Abandonment of a Community

Initially, I wasn’t going to write anything on this tragedy, I figured there would be plenty of analysis as to the whys and the wherefores of a building turned into a funeral pyre but I’ve yet to see the word Austerity used once, just once, in connection with this tragedy, which as usual in this world always impacts the most on working class communities, especially the poor, wherever it occurs.

Instead, we got endless hours, days of BBC hand-wringing, focusing almost exclusively on the (heroic) efforts of a devastated community, ignored and forgotten by their council and the government, with those damn cameras peering into peoples’ grief and ultimately, anger, made all the worse by the state’s total indifference to this calamity.

It took three days for the Prime Minister, Theresa May to visit the site and she had to do it under police guard! It’s only today, now four days later, that the government has finally set up some kind of command centre to deal with distraught relatives and friends of the dead, injured and missing (estimates now put the number of dead as at least 70).

If there’s anything that illustrates the murderous endgame of neoliberalism and what it does to people, this is it! But this is also Baghdad and it’s Damascus and a dozen other places around the globe getting a dose of democracy. Here it’s simple neglect powered by greed but it’s committed by the same governments, the same people who have abandoned wholesale, millions of people in their own backyards and slaughtered millions around the planet.

It’s no accident that the (former) inhabitants of Grenfell Tower are mostly people of colour and the deadly irony of their location is that they’re surrounded by people who live in properties worth millions, in one of the richest boroughs in the country, the Royal Borough of Kensington and Chelsea.

Years of neglect, starved of funding at virtually every level, with cutbacks to the Fire Service, the closure of fire stations, massive cuts to councils, the privatisation of publicly owned housing maintenance and refurbishment, handing over public housing to so-called housing associations. It’s been feast for business but death for the recipients of their ‘largesse’.

Sitting on top of it all is a remote and indifferent maze of digital bureaucracy that walls itself off behind a defensive shield, many layers deep, of computerised answering machines and online websites that never do what they’re intended to to do. Cut off from the cause of the pain, people eventually explode.

THERE IS SOMETHING SERIOUSLY WRONG WITH A BUREAUCRACY THAT IS INCAPABLE OF REACTING TO SERIOUS NEGLIGENCE, AFFECTING FIRE SAFETY IN A DENSELY OCCUPIED TOWER BLOCK, WITH ANY SENSE OF URGENCY .

DOES ANYONE ACTUALLY GIVE A DAMN? – Grenfell Action Group, 5 March 2013

Obviously not and that was four years ago and it’s only got worse in the interim as Austerity bites deeper and deeper into peoples lives. The newly ‘refurbished’ building (at a cost of ten million quid) went up like a torch in less than an hour. Ten million pounds? They could have put up a new one for that price!

This is gangster capitalism, where money is God and the people are ignored when they don’t have any, as is the case with the hapless (former) tenants of this monumental mausoleum to greed.

And the state and its media mouthpiece, the BBC, wonders why the citizens are angry, indicative of the fact that the media vultures too, are totally divorced from the reality that millions of people have to suffer through every day of their lives. Treated like criminals, the poor have to justify their existence to  remote and antagonistic private corporations that peer into their lives without comprehension or caring, guided only by computerised forms; do you meet the criteria?

Whose High Rise is Flammable?

Where I live in South London, on the horizon in all directions, the cranes are flying! At least thirty are visible to me as I write. (Photo: © 2015 William Bowles)

Currently, there are some 220 high rise apartment buildings either finished or under construction in London. All are expensive, the former inhabitants of Grenfell Tower wouldn’t be able to afford them and note that nobody seems concerned about the safety of these towers. Perhaps because they are all built to high standards and have adequate fire safety systems? Some their inhabitants would have been close enough  to see Grenfell Tower burn from their (fireproof) apartments.

ALL OUR WARNINGS FELL ON DEAF EARS and we predicted that a catastrophe like this was inevitable and just a matter of time. Below is a list of links to previous blogs we posted on this site trying to warn the Royal Borough of Kensington and Chelsea, who own this property, and the Kensington and Chelsea Tenant Management Organisation who supposedly manage all social housing in RBKC on the Council’s behalf:

10 thoughts on “Grenfell Tower: This Is What Austerity Looks Like by William Bowles”