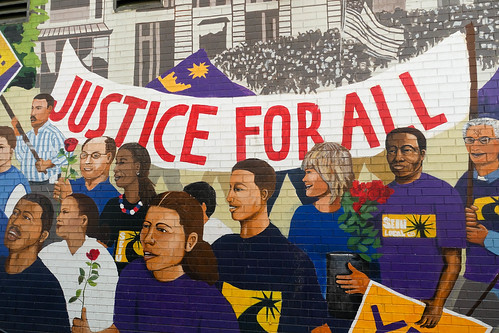 It is time for an urgent clarion call.

Given the retrograde pits inhabited by our ruling politicians and the avaricious over-reach of myopic big-business bosses, the self-described pillars of our society must step up to reverse the decline of our country. Here is my advice to each pillar:

You have good examples from history, including those business leaders who recently quit the US Chamber of Commerce over the necessity to confront climate change or the 150 business leaders who issued strong support for the successful Legal Services Corporation for low-income Americans that Trump’s budget would eliminate entirely.

Already prominent economists, business magnates like Warren Buffett and over 60 percent of Americans want single payer. Your strong voices together can sober up those politicians in Congress hell-bent on coarse pullbacks that will make the present situation even worse and more perilous. Imagine our elected, well-insured, representatives pushing a huge tax cut for the rich, at the expense of hospitals and clinics and big time reductions in Medicaid.

Over 300 retired generals, admirals and national security officials openly opposed Bush/Cheney’s criminal invasion of Iraq in 2003. Veterans For Peace makes eloquent arguments for waging peace. Now is the time to learn from their experience, stand for smart diplomacy and avoid succumbing to provocations and the boomeranging impacts of Empire.

Urge the restoration of the acclaimed, non-partisan Congressional Office of Technology Assessment (OTA) in Congress that Newt Gingrich and his Republicans terminated in 1995, plunging Congress into ignorant darkness and costly, wrongful budgeting.

Many of you have the moral authority to speak truth to the power of the one percent, and resist attempts to diminish support to those vulnerable members of our society who most need it.

In times of crisis, routines must be replaced with urgent awakenings, bringing out the better angels and wisdom from these underachieving pillars of the American community. A few leaders can take the first steps and many more will follow your example. Stand tall in support of justice in these trying times.

U.S. War Justification Is in the Eye of the Beholder by David Swanson