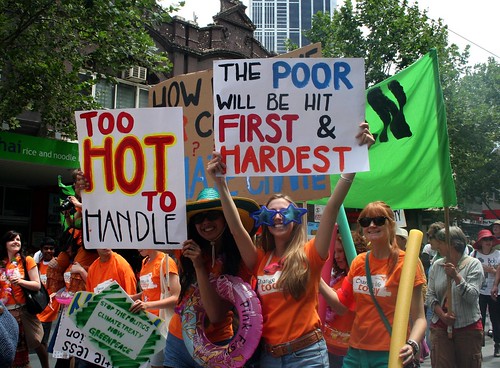 The Paris Agreement on climate change, signed in November 2016, was the first time all the world’s nations (except Nicaragua and Syria) committed to reduce emissions and cap man-made global warming.

Amongst a number of positive pledges made by governments a key agreement was the goal to limit the increase in the average global temperature to well below 2°C (above pre-industrial levels) and to aim for 1.5°C. The probability is that neither of these goals will be met; in fact a recent study conducted by the University of Washington, estimates there is a mere 5% chance of meeting the 2°C target, and states that, “The likely range of global temperature increase [up to 2100] is 2.0–4.9?°C.”

An important part of the Paris Agreement was a commitment to assist developing countries as they try to prepare for and mitigate the impact of rising global temperatures caused by greenhouse gases pumped into the atmosphere by industrialized countries.

In a somewhat optimistic statement after the Paris accord, UN climate chief Patricia Espinosa and Moroccan Foreign Minister Salaheddine Mezouar said, “Humanity will look back on November 4, 2016, as the day that countries of the world shut the door on inevitable climate disaster.” They went on to say that: “The Agreement is undoubtedly a turning point in the history of common human endeavor, capturing the combined political, economic and social will of governments, cities, regions, citizens, business and investors to overcome the existential threat of unchecked climate change.”

A step of huge significance then, not just in our approach to climate change, but in the development of a global sense of unity. And whilst little of substance has been done since the accord, it represented a major shift away from isolationism, nationalism and ideology towards collective responsibility and cooperative action.

The decision by President Trump not to implement the Paris Agreement violates this unifying act and is a massive mistake, one of many. It reveals how out of touch his administration and certain sections of US business are with the mood of the times and the majority of people around the world. His violent, irresponsible and ignorant action further isolates the US, and reinforces international feelings of anger and dismay at successive US government’s approach to global affairs and the destructive values espoused and exported by the Neo-Liberal ideologues that determine American government policy.

Michael Brune, from the US environmental group the Sierra Club expressed the view of many when he said that: “Donald Trump has made a historic mistake which our grandchildren will look back on with stunned dismay at how a world leader could be so divorced from reality and morality.” Trump has “shamelessly disregarded the safety of our families just to let the fossil fuel industry eke out a few more dollars in profits.” America is a significant source of financial and technological support for developing countries: this is also jeopardized by the decision to withdraw. The ambitions of many countries to reduce emissions are dependent on receiving international support, and lack of funds will impact on their ability to meet agreed targets.

By this decision the US, which is responsible for 15% of all carbon emissions, has made it more difficult to reach the goals laid out in the Paris Agreement and intensified the risks resulting from climate change. The results could well be devastating for the whole World (including America), in particular those countries in the front line of climate change, many of which constitute the poorest nations on Earth, are not the principle polluters, have little or no resources – socially, technologically or financially – to cope with the impact of increases in global temperatures and need the support of wealthier countries.

A World Bank report (Shock Waves: Managing the Impacts of Climate Change on Poverty) states that climate change “threatens the objective of sustainably eradicating poverty”, and unless substantial worldwide efforts are made, more than 100 million people could be pushed back into poverty by 2030. Sub-Saharan Africa and South Asia, home to the poorest of the poor, are the regions that will be hit the hardest. Studies by the Bank show that climate change in these regions will result in increased agricultural prices and could threaten food security: it’s the same old story, the poor always suffer most, no matter what the threat is.

Over the next ten years, according to The United Nations Framework Convention on Climate Change (UNFCCC) “it is predicted that billions of people, particularly those in developing countries, [will] face shortages of water and food and greater risks to health and life as a result of climate change.” Concerted global action – not withdrawal from international agreements – is needed they state: “To enable developing countries to adapt to the effects of climate change that are happening now and will worsen in the future.”

The poor live in a state of perpetual uncertainty; one natural disaster can take away what little they have, destroying homes and livestock, bringing death and disease. Based on three reports, The Intergovernmental Panel on Climate Change (IPCC) forecast that a global temperature increase within the lowest targets agreed at Paris, of between 1.5ºC and 2ºC will have a devastating impact: reduced crop yields in tropical areas fuelling hunger, the spread of malaria and diarrhoea, and the risk of extinction of 20 – 30 per cent of all plant and animal species. By 2020, “Up to 250 million people in Africa could be exposed to greater risk of water stress,” and over the course of the century millions of people around the Himalayas and Andes will be at risk of bouts of flooding and drought as glaciers retreat or disappear.

Environmental changes have always fed global migration, but the impact of climate change on communities in developing countries could lead to the displacement of unprecedented numbers of people. This will impact on countries in neighbouring regions and the wider world and in turn affect the surrounding ecosystems.

The key cause of mass displacement due to climate change will come from sea-level rises — a rise of 17 – 19 cm in the next 40 years is likely, with many scientists projecting a one meter rise by the end of the century. In addition to small island states, Egypt, Bangladesh, Vietnam, India and China are countries most at risk, all have large populations and productive agricultural land in low-lying coastal areas. Higher temperatures (affecting agriculture), disruption of water cycles and increased intensity of storms are the other key factors that are set to drive people from their homes.

The Global Military Advisory Council on climate change states, somewhat alarmingly, that climate change could trigger a refugee crisis of “unimaginable scale”, and that mass migration will become the “new normal”. Major General Munir Muniruzzaman, a former general in the Bangladesh army and chairman of the military Council has told The Guardian that, “one meter of sea level rise will flood 20% of his nation. “We’re going to see refugee problems on an unimaginable scale, potentially above 30 million people.” This view was echoed by former US Secretary of State John Kerry when, in 2015 (and nothing has changed since then) he warned that with increased food insecurity and shortages of water, violent conflicts between tribal groups fighting for survival would erupt and mass migration would follow. Far from being fantastical or apocalyptic, the early signs of this vision are upon us: In Pakistan for example, – one of the countries most vulnerable to climate change, floods during 2010 destroyed crops and forced 14 million people from their homes. But according to research conducted by the International Food Policy Research Institute floods are not the biggest threat, it’s hot weather, ‘heat stress’, as it’s called, that drive more people from their homes, as it severely impacts on crop yields.

Climate change is upon us, is increasingly affecting weather patterns around the world, and if the World Bank report is correct, in the short-term – between now and 2030, there is little that can be done to reduce them; the only option for developing countries over the next 15 years or so they say, is to “reduce vulnerability through both targeted adaptation investments and improved socioeconomic conditions.”

There is an alternative way to ‘reduce vulnerability’ for the poorest people in the world, and that is by the rich nations sharing what they have, and what the Earth provides more equitably amongst everyone. Building sharing into the socio-economic model that determines peoples lives; sharing the food and water, the knowledge, skills, information and materials, technology and ideas, so that those with nothing do not suffer the most as a result of our collective poisoning of the world; contamination by the industrialized nations of the world, which has caused the greatest crisis humanity has faced and is already tearing at the lives of millions of the most disadvantaged.

Earth is entering its sixth mass extinction event, posing a “frightening assault on the foundations of human civilization,” says a new study co-authored by Professor Gerardo Ceballos at the University of Mexico.

How Much Will Methane From Melting Permafrost Speed Up Global Warming?

Methane “seeps” on the tundra may be more problematic than previously thought, according to a new report co-authored by Torsten Sachs, a researcher at the GFZ German Research Centre for Geosciences in Germany.