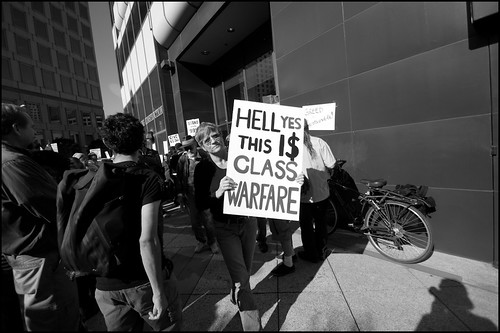 In this episode of the Keiser Report Max and Stacy discuss the coming sequel to the global financial crisis and the bond bubble warnings from Alan Greenspan. In the second half Max interviews Dr. Michael Hudson about Trumponomics, anti-trust, repeat banking offenders and his father’s proverbs.

These proverbs were collected by my father, Carlos Hudson, during the time he was jailed under the Smith Act in 1941, ostensibly for “Advocating the overthrow of the government by force and violence.” It was called the “gag act” because it put a gag on what one could read or say. Guilt was determined by whether one had the works of Lenin and Trotsky on one’s bookshelf.

The Stalinists urged the death penalty for the Smith Act, not realizing that it would be used against them after World War II.

The Minneapolis 17 who were convicted had taken the lead in organizing the Teamsters Union and the great Minneapolis General Strike of the mid-1930s. (The story is told in Charles Rumford Walker’s American City.) Minnesota’s governor, Floyd B. Olson, said, “I hope the capitalist system goes straight to hell.” Roosevelt’s Attorney General, Biddle, wrote in his biography that the one thing that he was ashamed about was having framed up the Minneapolis 17, because by no threat were they really a danger. The deal was a political favor to AFL head Daniel Tobin who opposed my father’s pressure to organize the teamsters within the CIO, and to the mafia that was eager to take over the Teamsters Union and had always had great sway within the Democratic Party.

My father’s crime was calling in the National Guard to protect the strikers from the police and thugs who had been hired as strike breakers to beat up the Teamsters and their supporters. His party name was Jack Ranger, and so I was nicknamed “The son of the Lone Ranger” as a kid. His major writing was the pamphlet “Next: A Labor Party.” He also wrote articles on the Minneapolis strikes for the Nation.

Minneapolis was the only city in the world that was under Trotskyist leadership — where, as one reporter put it a few years ago, being a Trotskyist was a career advancement opportunity.

My father had graduated from the University of Minnesota business school with an MBA in 1929 and hoped to become a millionaire in Latin American mining. But then the stock market crash and depression occurred, and he discovered that capitalism wasn’t fair. He read widely, and joined Jim Cannon’s Socialist Workers Party, the Trotskyist party.

I knew most of his fellow felons growing up as a little boy. I remember visiting him in jail, and everyone singing the Internationale and other songs to fan the flames of discontent.

After 1945 he followed Max Shachtman’s Independent Socialist League, and Max became a mentor of mine. Other members of the Minneapolis 17 who moved to Chicago was the group’s lawyer, Al Goldman, who spent much of his life trying to track down who killed his two German colleagues Emma Goldman and Karl Liebknecht. Al Russell also often visited from New York. Dad’s former cellmates helped me acclimatize when I moved to New York in 1960. So here, as in statist Russia, prisons were indeed the University of the Revolution.

My father said that his year in jail was the happiest year of his life. (He wasn’t much of a “people person.”) He was assigned to the library, where he collected the proverbs in this collection. After we moved to Chicago, he stenciled many proverbs on each wall of our house, from the living room down to the bathrooms.

He also compiled a dictionary of everything that Lenin and Trotsky had said about virtually every political subject. As a teenager, my friend Gavin MacFadyen and I used to sit down in the basement (where the banned books and pamphlets were kept in the 1950s) and pore over the index cards with these maxims. This was a great help in our Social Science classes at the University of Chicago’s Laboratory School. (Gavin was expelled for being a bit too attentive to what we learned.) Unfortunately, this collection somehow got lost in Dad’s move down to Florida when he retired from his position as editor of Dental Abstracts. He had edited Traffic World, but the FBI came around to his boss and asked why they had hired a Marxist. His boss was about to accuse others of Communism, so Dad was fired. But the American Dental Association, which hired him as an editor, said that they didn’t care about his politics, and he worked happily there for perhaps 20 years. (He died at the age of 95 in 2003.)

Informally, Dad also edited the pacifist Liberation magazine, whose mailing address was our house on Dorchester in Hyde-Park Kenwood (about a block or so from where Obama’s house now is.) Along with Sidney Lens, he became an advocate of Rev. A. J. Muste.

FBI men would often appear at the house and ask him questions like where his loyalty would lie in case of an atopic war with China. Also, they liked to set up cameras across the street and take pictures of us when we left the house. When neighbors would ask them what the fuss was all about, they would say, “Don’t you know who lives there …?” They didn’t mention the proverbs book. I got used to coming home and sometimes finding two crew-cut FBI men in the living room with my father, up-dating their files on him. (Later, Gavin got copies of the FBI files, and they were filled with wrong information from obviously bad informers. It was comical in retrospect.)

When I joined the Hudson Institute (no relation, except that we were both named after the river, which an ancestor of mine discovered) in 1972, Herman Kahn asked me whether there was any reason I couldn’t get a security clearance for when he took me to the White House and military think tanks. I told him about Dad’s conviction, and he said not to worry — the government knew that I wasn’t soft on Stalinism. (Herman collected many Schachtmanites around him.)

Many years after compiling these proverbs, Dad added a preface to say that over time, he had come to the conclusion that Trotsky’s economic program would have turned out along much the same lines as Stalin’s. When talking to socialists he became a libertarian, although when talking to most people he remained a socialist.

About 15 years ago Gavin produced an hour-long documentary and interview with Dad, discussing his work with Trotsky in Mexico. (Dad’s sister, my aunt Jeri Hudson de Leon, was married to a Mercedes dealer in Mexico City at the time, so my parents stayed with her while working with Trotsky, along with other Minneapolis activists.) But Gavin’s colleagues have not been able to find just where he put the CD, and I don’t remember him giving me a copy after we screened it in London.

When I went to Russia in 1994, I was brought to the house of some researchers who were reading the then-recently released files on Trotsky. They said that one thing puzzled them: Did he really have an affair with Frieda Kahlo?

I phoned Dad from their Moscow house. Dad got worried that the phones were being tapped and that I’d get in trouble, but I said that all the Russians really cared about those days was money, not old politics. So he laughed and laughed and said that, yes, he used to drive Trotsky back and forth to see Frieda.

continued at Dad’s Many Proverbs

“The Internationale” (French: L’Internationale) is a left-wing anthem. It has been a standard of the socialist movement since the late 19th century, when the Second International (now the Socialist International) adopted it as its official anthem. The title arises from the “First International”, an alliance of workers which held a congress in 1864. The author of the anthem’s lyrics, Eugène Pottier, attended this congress.