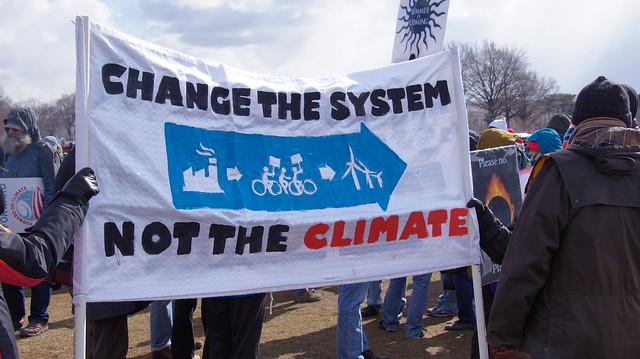 Man-made climate change, and the interconnected environmental catastrophe more broadly constitute the most urgent crisis facing humanity. It has come about as the result of a certain way of life, a materialistic approach to living in which greed and excessive consumption has been championed.

Voracious consumerism and values based on individual material success, competition and division lie at the very heart of the crisis, and if global warming, desertification, pollution, and the destruction of ecological systems are to be arrested, a fundamental change in attitudes and behaviour is needed. Without this, little of substance can be achieved – technological advances whilst crucial in breaking the dependency on fossil fuels, are not on their own enough. It’s a way of life – principally a developed world way of life – that needs to drastically change, as the Cloudburst Foundation states: “Balancing the carbon cycle requires much more than technological solutions. It requires a paradigm shift in how we approach economic growth and development”: A shift away from excess, socio-economic injustice and environmental vandalism to sustainability, social-environmental responsibility and sharing.

Together with deforestation, burning fossil fuels (coal, oil and gas) to meet humanity’s insatiable appetite for energy, most of which feeds industry, is the major source of the greenhouse gases that are generating climate change. Whilst nations production of these noxious elements vary, global emission’s overall are reducing, and despite some developing countries increasing their output, emission levels appear to have finally peaked; the task now before us is to drastically reduce them. Central to this work is the need to inculcate a new approach to how we live: to change the values that determine our actions and to alter the relationship we have with one another and the natural environment.

The most noxious greenhouse gases are Carbon Dioxide (CO2), Methane (CH4) and Nitrous Oxide (N2O). Of these CO2 is the biggest culprit, making up almost 70% of greenhouse gas emissions. It enters the atmosphere, the US Environmental Protection Agency (EPA) explains, “Through burning fossil fuels, solid waste, trees and wood products, and as a result of certain chemical reactions (e.g., manufacture of cement),” and is extracted or ‘sequestered’ (from the atmosphere) when it’s absorbed by plants.

Of the total amount of CO2 cast into Earth’s atmosphere from fossil fuels in 2015, Carbon Brief relates that, “41% came from coal, 34% from oil, 19% from gas, 5.6% from cement production and 0.7% from flaring.” Almost half of all CO2 emissions remained in the atmosphere; a third was absorbed by plants and 26% by the oceans. The burning of coal, natural gas, and oil to meet the demand for electricity and heat is the sector responsible for the largest amount of global greenhouse gas emissions, making up 25%. This is followed, the EPA says by agriculture (crops and livestock) and deforestation. Coming in a close third is industry with 21% of all greenhouse gas emissions, then transportation at 14%.

China emits almost a third of all greenhouse gas emissions and is the world’s biggest polluter, followed by the United States with around 15%, then the European Union (28 countries) with 11%. Europe has made substantial reductions in emissions and in 2015 they were down 22% compared with 1990. India, with a fifth of the world’s population and global business ambitions is pouring greenhouse gases out at an alarming rate; in 2015 emissions were up 5.2% on the previous year, to 6.3% of the global total.

If we are to halt climate change, and begin to heal the natural environment, we must stop burning fossil fuels and turn to alternative sources of energy (solar and wind e.g.) for the majority of our energy needs. This process is well underway in certain countries: According to the Climate Reality Project, Germany, which produces 21% of the EU’s greenhouse gases is meeting 78% of its electricity demand from renewable sources. In 2015, Sweden proposed a plan to eliminate all fossil fuel usage in the country and immediately increased investment in solar, wind, energy storage, transport and smart grids; Costa Rica met 99% of its electricity needs from renewables in 2015. Denmark drew 42% of its energy from wind turbines in the same year and aims to be fossil fuel free by 2050; Nicaragua supplied 54% of all electricity production from renewables in 2015 and is aiming for 90% by 2020. United States, which has the second highest wind energy capacity in the world (after China) is generating only 13% of its electricity from renewables, but an optimistic study by the National Oceanic and Atmospheric Administration (NOAA) says that the US “could reduce emissions by nearly 80% in 15 years.”

While these and other examples offer hope, renewables currently only account for 2.4% of global energy consumption and 4.7% of electricity generation. If the Paris Agreement of limiting the increase in global temperatures to 2°C, or 1.5°C (above pre-industrial levels) has any hope of being achieved a massive increase in renewables is needed, coupled with a reduction in the overall energy demand. A study by the International Institute for Applied Systems Analysis (IIASA) shows that for net emissions to peak by 2022, renewable sources of energy would need to increase by around 5% per year. In order to achieve this target a move away from lifestyles and economies built around consumerism and excess is essential. This necessitates a shift in attitudes from selfishness and greed, abundance and endless consumption, to sufficiency, sharing and environmental responsibility. It also demands a radically different economic system, one that is sustainable and just. As the Cloudburst Foundation puts it, “To truly reverse global warming we must overturn the current economic and development systems at play, and work to create alternatives that benefit not just some but all.”

At the heart of such alternatives must be sharing, cooperation and a profound sense of group responsibility. Such principles arise quite naturally from the realization that humanity is one, a fact that is strengthened when we express such qualities. We are brothers and sisters of one-humanity, and we have a duty of care for one another and the Earth itself.

The current economic system is fed by endless consumerism, so too is climate change. It is our constant demand for stuff, much of which is made in the factories of the developing world — where workers are poorly treated, have no or few rights and are badly paid — that is perpetuating the industrial demand for energy, which is met by burning fossil fuels.

If we are to halt global warming, reverse the destructive effects of climate change and allow the planet to heal, our approach to how and what we consume needs to fundamentally change and the materialistic value system, which promotes competition, selfishness and greed, rejected. Simplicity, sufficiency and responsible consumption need to be inculcated and encouraged, in place of expediency, waste and ignorance.

Systemic change to alter the socio-economic conditions in which we all live is desperately needed, but more importantly a shift in thinking, a change in consciousness is imperative, and this is taking place within large numbers of people, particularly young people who in many areas lead the charge. Governments have a duty to listen and act, to introduce policies based on environmental considerations; to produce electricity from clean sources (not fossil fuels and certainly not nuclear) to provide efficient and cheap public transport systems run on renewable energy; to promote environmental awareness campaigns to educate and inform the public; to incentivize the use of renewable energy sources and to reduce the nation’s carbon footprint. And individuals have a responsibility to elect politicians that prioritize environmental issues, to act in an environmentally positive manner, to consume responsibly and to reduce consumption. After the economic crash in 2008/9 there was a sharp drop in the production of greenhouse gases in Europe as a result of reduced industrial activity — people felt uncertain and were buying less stuff, which is what is required.

The impact on the environment should be the first factor for consideration when making any and all purchasing decisions, including food, services and utilities: Find an electricity/gas supplier that is fed from renewable sources, a bank that invests in environmentally sensitive companies and projects; Be serious, be responsible. Research the choices available, look into the ethos of the company making the product, find out how the item is manufactured or grown and the environmental (and human) impact of production, how long will it last — the longer the better, — what resources does it use and were employed in its manufacture and development, cultivation, etc., etc. Buy secondhand, reuse and recycle whenever possible, become a conscious consumer. Transportation is responsible for 14% of all greenhouse gases; this is made up of airline travel, rail and cars/vans/lorries, etc. If you’re buying a vehicle, go electric. If you have a diesel car or van — the most polluting type of vehicle — sell it immediately (preferably scrap it) and replace it with either a hybrid or an all-electric model, in fact don’t buy a vehicle unless there is really no other option. If you’re travelling – holiday or work – go by train or bus, don’t fly unless it’s absolutely essential; use public transport, walk or cycle as much as possible.

The responsibility for halting climate change rests firmly with each and every one of us. Our individual actions can either inflame the crisis or strengthen the collective fight to heal the natural environment in which we live and usher in a new day in which humanity lives in harmony with the planet.

6 thoughts on “Systemic Change Is Desperately Needed by Graham Peebles”