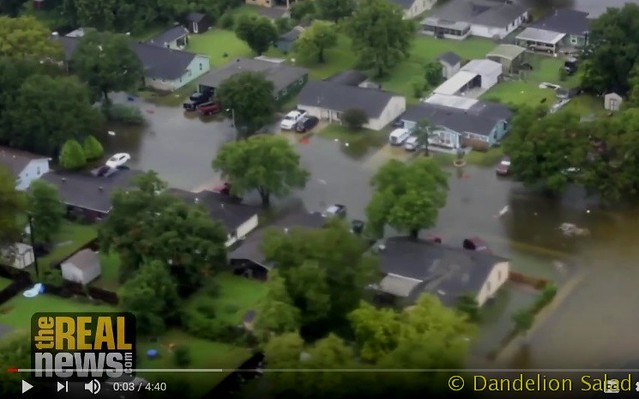 https://democracynow.org – A catastrophic storm has hit Houston, the nation’s fourth-largest city and home to the largest refining and petrochemical complex in the United States. The crisis began on Friday when Hurricane Harvey made landfall in Rockport, Texas. It was the most powerful hurricane to strike the state in more than 50 years. Much of the damage has been caused by the massive rainfall, with parts of Texas already receiving 30 inches of rain. That could top 50 inches in the coming days. Entire highways in Houston are now underwater. The storm has caused five reported deaths, but the death toll is expected to rise. Thousands of people are still stranded in their homes, waiting to be rescued. Meanwhile, the city of Dallas prepares to turn its convention center into a mega-shelter to host 5,000 evacuees. The National Weather Service released a statement on Sunday saying, “This event is unprecedented and all impacts are unknown and beyond anything experienced.” We speak with Bryan Parras, an organizer for the “Beyond Dirty Fuels” campaign with the Sierra Club in Houston, Texas. He helped found the environmental justice group t.e.j.a.s.

“This Is the New Normal”: How Climate Change Is Fueling Massive Storms like Harvey

https://democracynow.org – Hurricane Harvey has already dumped more than 9 trillion gallons of water on Texas—enough water to fill the Great Salt Lake in Salt Lake City twice. Meteorologists project another 5 to 10 trillion gallons of water could be dumped on the region in coming days, potentially making this the worst flooding disaster in U.S. history. We speak with David Helvarg, executive director of Blue Frontier, an ocean conservation organization, about how climate change is fueling massive storms like Hurricane Harvey.

Another Gulf Is Possible

Occupy Sandy: There Is Endless Need Out Here; Bodies Still Being Recovered

How the 1 Percent Conjured a Monster Storm by Chris Williams