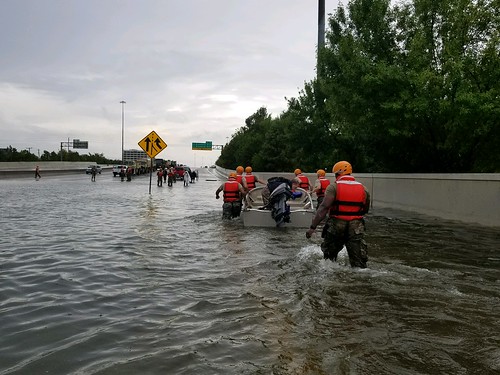 Hovering Hurricane Harvey, loaded and reloading with trillions of gallons of water raining down on the greater Houston region—ironically the hub of the petroleum refining industry—is an unfolding, off the charts tragedy for millions of people. Many of those most affected are minorities and low-income families with no homes, health care or jobs to look forward to once the waters recede.

Will this tragedy teach us the lessons that so many politicians and impulsive voters have been denying for so long?

The first lesson is that America must come home: we must end the Empire of Militarism and of playing the role of policeman of the planet. Both of these habitual roles are backfiring and depleting trillions of taxpayer dollars that could be better used toward rebuilding our country’s infrastructure, strengthening our catastrophe-response networks and preparing for the coming megastorms like Hurricane Harvey. A projected trillion dollars being spent by Obama, and now Trump, just to upgrade nuclear weapons will only spur another arms race with Russia and China. This money could be more productively spent protecting Americans from immediate threats, such as natural disasters from man-made climate change.

Politicians must stop overstuffing a bloated military budget and leaving our country fiscally unprepared to handle mass epidemics and mass megastorms. In short, will they stop leaving our country defenseless against the prospects of huge levels of mortality and morbidity?

Second, Congressional and White House deniers of man-made climate disruption must renounce their dogmatic ignorance and confront the reality in the scientific warnings about the accelerating wrath of a provoked natural world.

Last month, I asked Oklahoma Senator James Inhofe—who has called climate change a “hoax”—what level of evidence would change his mind about climate change. He has not replied yet. But that is the question that should be asked of all Trumpsters, including the voters who share their disregard: Just what series of climate events  – what piles of scientific measurements and documentations now in the Arctic, the Andes, Antarctica, Greenland, the Maldives, etc. – could change their minds?

Third, our elected officials must accept that continuing to waste trillions of dollars on corporate subsidies, bailouts, giveaways and lack of enforcement of costly crime—crony capitalism—further weakens our country’s capacity to foresee and forestall omnicidal disasters.

Enough, also, of the Congressional Republicans starving the IRS budget so it cannot collect more of the many billions of dollars in uncollected global corporate taxes. These Republicans don’t seem to connect the size of deficits, which they detest, with uncollected tax revenue, now estimated by the IRS to exceed $350 billion a year.

Maybe someone should finally write a book entitled “Listen, Voters.” It could start by asking why enough voters keep electing politicians, who sweet talk them, only hook up with corporations and an ideology of corporatism that adversely affects the very voters who put them into office, along with many other Americans. If these voters, who so often vote against their own interests, do a little homework before Election Day, they can easily separate the fakers and the sell outs from the real candidates, who may not have silver tongues and corporate backing, but have a consistent record of being on the side of the people.

Voters need to be more demanding if they are to break the chains of a rigged electoral system that deprives them of choice, of voice and, most importantly, of the sovereign power they possess in our Constitution.

The August 29, 2017 Washington Post paused from its extensive coverage of the destruction in Houston to laud the “Flood of Courage” in its lead editorial. It wrote of the “massive – and inspiring – volunteer rescue response…With nothing more than their own courage, good people ventured into the rushing gullies and culverts, risking their lives to save others in the unrelenting rain.”

While Trump tweets and hopefully reconsiders his earlier cruel budget cuts for FEMA and other life-saving federal agencies – such as the Centers for Disease Control and the EPA – the people are swinging into action on the ground. May they swing into wise and just action in the next elections – both as new candidates and, high horizon, informed voters. For there is a much better America to be had.

As storms hit the U.S. and South Asia, investigative journalist Christian Parenti says we have the laws and technology to protect humanity from climate disaster, but we need to rip away the veil of the “free market”.

While ‘some of the city may return to normal, an entire different section just won’t have that capacity,’ says organizer Yvette Arellano.

6 thoughts on “We Must End the Empire of Militarism and Bring Our Taxpayer Dollars Home by Ralph Nader + Christian Parenti: We Need to Rip Away the Veil of the “Free Market””