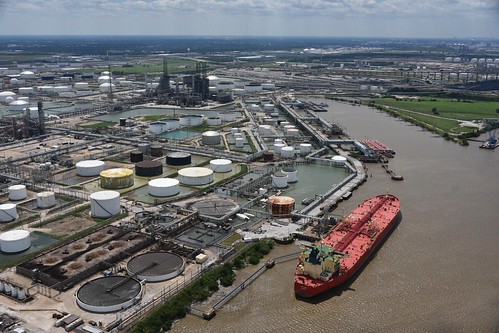 Yet characterizations of the carnage by the National Weather Service as “historic,” “unprecedented” or “beyond anything experienced” should not be conflated with the spurious claim that the devastation wrought by Harvey is “unpreventable” or “unexpected.”

The outcry by advocates, experts and activists against the unplanned, for-profit development of cities like Houston has been consistently ignored by city officials, leaving millions–especially the poor and people of color–in the fourth-largest city in the U.S. in a death trap.

“Houston is the fourth-largest city, but it’s the only city that does not have zoning,” Dr. Robert Bullard, a Houston resident and a professor who studies environmental racism, told Democracy Now! on August 29. “[As a result], communities of color and poor communities have been unofficially zoned as compatible with pollution…We call that environmental injustice and environmental racism. It is that plain, and it’s just that simple.”

The image of elderly people in a nursing home sitting in waist-deep water is a shocking illustration of how the most vulnerable segments of the population are struggling to deal with the effects of Harvey. Thankfully, all of those people have been rescued and brought to safety.

But, as Dr. Bullard points out, the nightmare for tens of thousands of the city’s poorest residents living in close proximity to Houston’s vast petrochemical industry is just beginning. They are literally being gassed by and steeped in the toxic materials unleashed by the floodwaters that have damaged the oil refineries and chemical manufacturers that surround their homes and neighborhoods.

The choices facing people in these neighborhoods are gut-wrenching. Should you and your family stay as toxic floodwaters rise all around you? If you decide to go, where do you go?

Just hours before Harvey made landfall (and exactly one week before the state’s notorious “show me your papers” bill known as SB 4 is set to take effect), Customs and Border Patrol officials announced they would maintain their checkpoints to verify immigration status as people fled north, evacuating ahead of the approaching destruction.

Although Texas Gov. Greg Abbott, bowing to the ensuing public criticism, announced that those fleeing would have access to shelters regardless of their immigration status, the overall message to the undocumented was clear: drown or get deported.

The private prison corporations running Abbott’s detention centers, their cells filled by raids and roundups carried out by the state’s deportation machine, were similarly opaque about their plans to deal with the prisoners under their control.

Confusion continued with contradictory orders from city and state officials about whether residents should stay or flee. Many stayed behind, some without the money to do otherwise. The homeless were naturally distrustful of the police, who have denied them access to food and hounded them from the streets, under the rule of Mayor Sylvester Turner.

The common refrain from local officials in Houston and elsewhere was that telling people to leave would simply trap people on the roads as the storm arrived–so people should just take shelter where they were and hope for the best.

But this makes it seem as though the situation facing city managers in Houston was an unanticipated dilemma, and that the city’s captains of industry and elected officials haven’t had a hand in constructing the conditions that made the effects of Harvey so devastating and turned parts of Houston into a deathtrap.

Houston’s lack of infrastructure to manage potential flood events is in many ways an environmental expression of the crisis of neoliberalism. As a crucial port city that thrives off of oil revenues, Houston is one of the largest profit-making urban areas in the U.S.

The flood of fixed capital, particularly into the construction and petrochemical sectors, has also made the city a flood capital. Heavy investment in impermeable concrete has turned wetlands into high rises, shopping malls, parking lots and manufacturing platforms.

But wetlands are irreplaceable as natural shock absorbers for heavy rainfall and reduce the risk of flooding. Concrete, by contrast, acts like a sluice to transmit and concentrate water. The activities of developers thus transform nearby neighborhoods, once relatively safe from flooding, into basins for collecting floodwater.

Even when regulations are imposed, they are routinely ignored and go unenforced. But regulation is rare because elected officials are the lapdogs of developers who regard better drainage systems as an unconscionable cost that others should pay for–in particular, through regressive taxes on working people.

LOCATED IN a region prone to heavy rain, Houston’s last significant flood prevention measure was a set of dams introduced in the 1940s to prevent the city’s system of bayous from overflowing into its central business district. The dams, however, were in the middle of repair as the storm arrived Friday–just as the levies around New Orleans were being upgraded when Hurricane Katrina struck in 2005.

In order to avoid the embarrassment of a levy breach reminiscent of Katrina, the Army Corps of Engineers opted for a controlled release of a limited amount of water to lower the stress on the dams, their fragility a hieroglyph of a general crisis of public infrastructure thrown into sharp relief by Harvey’s arrival.

Houston meanwhile has been subject to devastating floods for decades, the most memorable of which was not Hurricane Ike in 2008, but tropical storm Allison in 2001, which left 41 people dead. Massive storms that flooded the city in 2015 were likewise described as “unprecedented.”

Having ignored the warnings of scientists and the protests of trapped residents, officials are now feigning ignorance and surprise despite the fact that they facilitated the transformation of Houston into a capitalist fantasyland that doesn’t absorb water, but gathers it in.

But if “unprecedented,” “once-in-a-lifetime,” “historic” weather events are happening with greater frequency–the number of natural disasters has quadrupled since 1970, according to the Economist–then it should be obvious that they are no longer unprecedented, once-in-a-lifetime, historic events. They are the new normal, brought about fossil-fueled climate change.

In that sense, they may in fact be unnatural storms.

Rising air and ocean temperatures alongside increased levels of water vapor in the atmosphere–the consequences of extracting and burning fossil fuels–have created the conditions for powerful storms, like Harvey, to emerge in the Gulf. These conditions cause them to move slowly through the open ocean, siphoning up ever-increasing amounts of water that return to earth once the storms make landfall.

When Harvey struck, worsening atmospheric conditions also meant that there was little wind to keep the storm moving once on land. As a result, like Allison, Harvey came ashore and hovered, dumping 11 trillion gallons of water and transforming poor and working-class neighborhoods into water tanks. (A couple years ago, this was the exact shortfall of water responsible for California’s “unprecedented” drought.)

HOUSTON’S FATE provides merely a glimpse of what’s to come for other coastal cities as sea levels continue to rise.

Nuclear power plants and petrochemical processing sites in Bay City, just east of Houston, and elsewhere along the coast are unnatural disasters lying in wait for an unnatural storm to set them loose.

Reports have estimated damages in the tens of billions of dollars and claimed the storm has set Houston back years. But the fact is that capitalism has rigged the cities of the Gulf Coast for disaster from top to bottom.

As in New Orleans with Hurricane Katrina and more recently after Hurricanes Ike and Sandy, the destruction in the wake of Hurricane Harvey will leave Houston wide open to the vultures of “disaster capitalism” as publicly owned infrastructure, liquidated by the storm’s unnatural carnage, is replaced with further private development–and more impermeable concrete.

The White (House) supremacist, meanwhile, seems to have been overcome by an irrepressible urge to flatter Hurricane Harvey on Twitter, as if the mainstream media’s personification of the storm is real. It makes you wonder whether he thinks Gulf Coast residents did something to provoke Harvey, with its flooding “on many sides.”

Trump made his priorities clear as he doubled down on his racist economic nationalism by announcing his plan to resume the transfer of military hardware to police forces and pardoning the grotesque Sheriff Joe Arpaio as news coverage of Harvey–a storm already reminiscent of Hurricane Katrina, which laid bare the fault lines of race and class in New Orleans–was ramping up.

Houston’s ruling class has no ability (not just for want of competence, but that too), much less interest, in resolving the city’s flood problems, and Trump is certain to buttress their project by fomenting racial divisions among the downtrodden while he diverts the necessary funds for urgently needed public services to a barbaric budget for military spending.

Ultimately, a real recovery from social tragedies like Harvey will come from struggles that seek to reconfigure urban space in the interests of working-class people–by overturning the system that currently designs it to maximize the extraction of profit no matter the human or environmental cost.