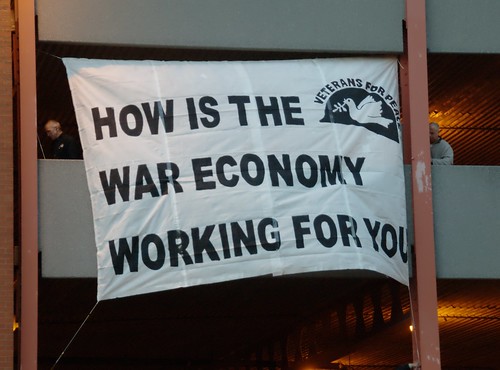 The U.S. military consumes more petroleum than most entire countries and has a bigger budget than most governments and about the size of all other militaries combined. The U.S. military destroys areas of the earth on an unfathomable scale, including back home where it is responsible for 69% of environmental disaster superfund sites. Yes, the top destroyer of the U.S. natural environment is the U.S. military.

And while Trump threatens nuclear war, scientists say that a single nuclear bomb could cause climate catastrophe, and a small number of them could block out the sun, kill crops, and starve us to death. There is no such thing as threatening nuclear war on someone other than yourself. The erosion we are seeing in our civil liberties, the mass surveillance, the militarized police: these are symptoms of a criminal enterprise called war. It fuels and is fueled by racism, bigotry, hatred, and violence. The excuses made for it are so weak and its horrors so inexcusable that the top killer of U.S. participants in war is suicide.

And yet, Trump proposes to move another $50 billion from just about everything good and decent into war, and the Democrats run around denouncing the supposed cuts without mentioning the existence of the military or the fact that it’s not cuts at all, but moving the money into war. The Democratic Congressional candidates that have lost all their special elections this year to warmongering Republicans have in each case presented platforms that did not mention any foreign policy whatsoever. The same goes for their new hero Randy Bryce. The Progressive Caucus’s dream budget increases military spending. And of course a certain former Senator from New York who seems to still be running for the 2016 Democratic presidential nomination never met a war she didn’t love.

But I think it behooves all of us to confront our own shortcomings a little more honestly than Hillary Clinton does. A Senator from Vermont just went on Stephen Colbert’s show and rattled off his list of progressive goals three different times without ever mentioning war or peace. Even the question of whether to end or continue current wars just doesn’t come up. During the campaign, Senator Sanders said that he thought Saudi Arabia should “get its hands dirty” and pay for more of the wars, as if Saudi Arabia’s hands weren’t drenched in blood, as if it weren’t funding wars on the same and opposite side as the U.S. already, and as if wars were some sort of philanthropy the world depends upon. Senator Sanders falsely as well as immorally defends the murderous F-35 airplane as a jobs program for Vermont where it will damage the hearing and the brains of the children in the school it takes off over. And when Senator Sanders was asked “How will you pay for all your ponies?” (Ponies is Hillary Clinton’s word for basic human rights) he didn’t reply “I’m going to make a slight reduction in military spending.” Instead he gave a complex answer that produced endless media screaming about tax increases. Contrast that with the popular performance of the next prime minister of the United Kingdom Jeremy Corbyn who explains that the wars are illegal and counterproductive.

So, we have to move the best and the worst of the politicians in the U.S., and we have to do so with a popular movement that changes the culture. If you go to WorldBeyondWar.org you can get involved and see a couple of events coming up here in DC, one being a flotilla of hundreds of kayaks to the Pentagon to oppose any more oil for wars as well as wars for oil, and the other being a conference bringing the peace and environmental movements together. That’s at WorldBeyondWar.org. Thank you.

Sign up now for the No War 2017: War and the Environment conference at http://worldbeyondwar.org/nowar2017.

Eric Colville: The End of War

Help make it happen at WorldBeyondWar.org.

The Conference to Save the Environment By David Swanson

Imagining a Hillary Clinton Presidency So Far by Paul Street