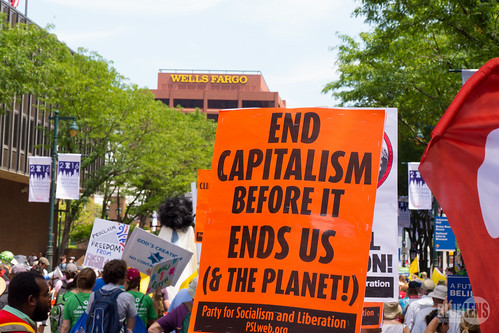 Sept. 11 — Scientists know it. The rash of powerful storms to hit the Caribbean and the Southern states of the U.S. in the last month was not “natural.” It was directly related to human-caused climate change and the “new normal” of warmer ocean temperatures and higher seas.

In this country, popular awareness of the danger came with the suffering and many deaths caused by Hurricane Harvey and its massive flooding along the Gulf Coast.

Now comes Hurricane Irma, which brought absolute devastation to many islands in the Caribbean as a Category 5 storm with 175+-mile-an-hour winds.

Irma was downgraded to a Category 2 storm, with 110-mile-an-hour winds, by the time it slammed into Naples, Fla., but it still did a lot of damage.

But more than climate change is responsible for the deaths and destruction accompanying the storm. A look at some of the islands where the hurricane damage and loss of life have been the worst reveals the political side of the disaster.

Heritage of colonialism and racism

Most are colonies or former colonies — of the U.S., Britain, France and the Netherlands.

The island of St. Martin, with about 78,000 permanent residents, reported 11 deaths. One side of the island is Dutch, the other French. Some 95 percent of the structures on the French side and 75 percent on the Dutch side were damaged or destroyed.

More than 1,200 U.S. tourists were evacuated on Sept. 9 from the Dutch side, with the help of the U.S. State Department and the Pentagon. But the residents who survived were left behind with the wreckage.

France and the Netherlands, which did nothing to help the people before the storm hit, have since sent police and troops to the island to protect private property. There is little word on how the residents are doing, other than reports of “looting” — of water and biscuits!

The U.S. seized Puerto Rico from Spain in 1898 and euphemistically calls it an “unincorporated territory.” Its neocolonial status has led to a debt crisis and growing poverty. Although Hurricane Irma only “grazed” Puerto Rico, “at least three people died and almost 70 percent of households were plunged into darkness. The storm knocked out Puerto Rico’s fragile power grid, exposing the island’s decrepit infrastructure and raising questions about its future viability amid a worsening economic crisis.” (New York Times, Sept. 10)

The islands of Antigua and Barbuda were virtually destroyed by the hurricane. These small islands were British colonies that in 1981 became “independent,” but remained part of the Commonwealth, with Elizabeth II still the Queen.

Dr. Gabrielle Thongs of the University of the West Indies summed up the situation of these islands:

“[W]e must be clear that climate change is not the only villain. Regional underdevelopment and global economic polarization exacerbate the effects of disasters. …

“Irma’s Category 5 assault … has resulted in 28 confirmed deaths across the Caribbean so far — and thousands will be displaced. Those whose lives have been washed away, leaving them without shelter, include street dwellers, homeless people, squatters and others living precariously in rural, hillside and coastal areas, which are prone to landslides, collapse and flooding. …

“Irma has characteristics that could make it one of the Caribbean’s most damaging hurricanes on record, due in part to the low levels of economic development that hamper the region’s ability to cope with natural hazards. …

“[I]n Barbuda Irma destroyed more than 90 percent of the housing stock and telecommunications infrastructure. … By comparison, although serious damage was reported in Bermuda and Cape Verde, nothing nearly as devastating as this occurred. These two islands can expect to return to normal life much more quickly than the islands with fewer economic resources.” (The Guardian, Sept. 11)

Some 87 percent of the people of Antigua and Barbuda are descendants of African people enslaved by the British. Bermuda, by contrast, reports 54 percent Black and 31 percent white, with the whites the entrenched rulers of the island since it was first settled by Europeans.

Haiti did not sustain a direct hit from Irma, but the heavy rains caused widespread flooding. Haiti’s terrible poverty has denuded the hillsides, making it especially vulnerable to flash floods.

Haiti became an independent Black country in 1804 through a successful revolution against French rule that ended slavery. But for nearly two centuries, the colonial and imperial powers have strangled its economy and undermined its sovereignty. For example, U.S. Special Forces kidnapped popular president Jean-Bertrand Aristide on Feb. 29, 2004, and flew him to the Central African Republic.

The one bright spot in the Caribbean is Cuba. With 11.5 million people, it reported just 10 deaths from Hurricane Irma — approximately 1/150th the death rate on St. Martin.

The wealthy state of Florida in the U.S. suffered from a weakened Irma packing winds of 110 miles an hour. Try to imagine what it was like when Cuba took a direct hit from 175-mile-an-hour winds.

Most of the Cuban deaths came from the collapse of old buildings, a direct consequence of the cruel U.S. economic blockade that has deprived the nation of trade and the wherewithal to upgrade its housing stock. The casualties could have been much worse, but Cuba has a world-class program to save lives and evacuated a million people from the coastal area, including 5,000 tourists from recently developed vacation facilities on offshore islands battered by the storm.

Earlier, when the storm was still just threatening the eastern Caribbean, socialist Cuba sent 750 volunteer medical workers to help the smaller nations at risk there.

What can be done?

Hurricanes are not the only consequence of global warming. Wildfires are raging in the Pacific Northwest, where they have claimed 732,000 acres of forest this year, creating hazardous smoke conditions in cities like Portland, Ore. Average summer temperatures in the area are predicted to rise later in this century by between 4.7 and 6.5 degrees, foretelling even greater destruction.

Scientists say this is just the beginning.

So why is there no plan to mitigate, much less try to reverse, this cataclysmic forecast?

Is it that the U.S. government is unable to plan for the future?

Not at all. It does have a very, very expensive plan to upgrade the Pentagon’s nuclear arsenal. Begun under the Obama administration, the total cost over the next 30 years will come to between $1.25 trillion and $1.46 trillion, according to U.S. government budget data analysis by the Arms Control Association.

What this reflects is not the danger that some “rogue” country is going to attack the U.S. with nuclear weapons. That is ridiculous hype, used to justify such enormous expenditures. The real reason is the entrenched political and economic position of the military industries, which are intertwined with big banking capital. In a time of economic uncertainty, they are guaranteed huge profits from government contracts.

The Trump administration represents capitalism without its liberal mask. He and his billionaire cronies want to dispense with environmental protection, claim global warming doesn’t exist and cut the budget for cleaning up toxic spills. He appointed budget director Mick Mulvaney, who says climate science is “a waste of money.” He proposed ending a program to improve research and predict tornadoes in the South and would cut the weather-satellite budget by 17 percent. (The Atlantic, May 24)

The struggle to save the planet and all the endangered species on it — including us — boils down to one thing: taking control of economic life out of the hands of the profiteers. We need a revolution to empower those who do the work and can plan for human need, not for capitalist greed.

After Irma, a Look at Why Cubans are 15 Times Less Likely to Die from Hurricanes Than Americans

https://democracynow.org – One of the Caribbean islands hardest hit by Hurricane Irma was Cuba, where 10 people died. Irma hit Cuba’s northern coast as a Category 5 storm. It was the deadliest hurricane in Cuba since 2005, when 16 people died in Hurricane Dennis. Cuba has long been viewed as a world leader in hurricane preparedness and recovery. According to the Center for International Policy, a person is 15 times as likely to be killed by a hurricane in the United States as in Cuba. Meanwhile, Cuba has already sent more than 750 health workers to Antigua, Barbuda, Saint Kitts, Nevis, Saint Lucia, the Bahamas, Dominica and Haiti. For more, we speak with Elizabeth Newhouse, director of the Center for International Policy’s Cuba Project. She has taken numerous delegations from the U.S. to Cuba to see how the Cubans manage disaster preparedness.

Austerity, Divestment & Irma: Juan González on Why 300,000 in Puerto Rico are Without Power + A Storm of Silence: Study Finds Media Is Largely Ignoring Link Between Hurricanes and Climate Change

https://democracynow.org – FEMA Administrator Brock Long is traveling today to Puerto Rico and the U.S. Virgin Islands to see firsthand the damage caused by Hurricane Irma. In Puerto Rico, 300,000 remain without power—despite the fact that the island was barely hit by the storm. Authorities have warned parts of Puerto Rico could be without electricity for up to six months, in part due to the island’s economic crisis. We speak with Juan González about how U.S.-imposed austerity and divestment are contributing to the electricity crisis after Irma.

https://www.democracynow.org/ – “A Storm of Silence.” That’s the title of a new report by the watchdog group Public Citizen that looks at the media’s failure to discuss climate change in its wall-to-wall hurricane coverage. While all the television networks commented on the magnitude of Hurricane Harvey and “extreme weather,” virtually none explained how warmer ocean temperatures lead to heavier winds, warmer air causes more precipitation, and higher sea levels exacerbate storm surges. The report examined 18 media sources’ coverage of Hurricane Harvey—looking at 10 major newspapers, three weekly news magazines and national programming from ABC, CBS, NBC, CNN and Fox News over the course of eight days’ worth of Hurricane Harvey coverage. The report concludes, “Many failed to discuss the issue [of climate change] much or failed to cover important aspects of it. … Two of the three major broadcast networks, ABC and NBC, did not mention climate change at all in the context of Hurricane Harvey.” We speak to David Arkush, managing director of Public Citizen’s Climate Program.

7 thoughts on “Hurricane Irma’s Devastation: Nothing “Natural” About It by Deirdre Griswold + Video Reports”