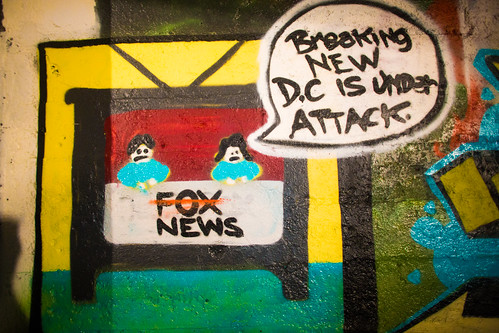 For decades, the factors that decided what noteworthy stories would not find their way into print or on the air came down to the media’s ignorance, laziness or from advertising restraints. How else can one explain the many years that passed before the tobacco, auto and junk food industries became the subject of regular consumer reporting? For too long, the explosive material for good journalism in these and other areas had remained hidden in plain sight.

With the intensification of soundbite journalism, fueled by audiences’ increasingly short attention spans, twitter addiction, the stupefaction of video culture and a willful disregard of both history and contemplation, a new form of censorship has emerged. The domination of “breaking news”—increasingly defined by episodes of violence, natural disasters and celebrity/political outrages and lurid scandals—is rampant.

When any one of these sensationalized episodes is seen as the “big story,” its massive over-coverage crowds out much of what normally would be communicated through the media. At their most frenetic periods, Fox News and CNN represent the worst of these lucrative culs de sac.

More and more, this phenomenon of fewer and fewer types of stories crowding out diverse and crucial reporting has become contagious. Our self-selecting social media bubbles further isolate us by validating, but not challenging, our opinions. Sunday morning network television “news” shows display the same subject, the same invited guests that were in that week’s newscasts. It has become almost impossible to introduce any subject matter, especially fresh disclosures and reports, outside of this tightening circle of opinion oligopolists.

Notice the near maniacal focus on Trump during the 2016 presidential campaign, which amplified his insults, falsifications, howls of outrage and damaging rhetoric. Shut out was any attempt by civic groups to widen the election period’s public discussions of important topics that were taken off the table by the two parties and unchallenged by a dittohead media.

When I ask modestly liberal syndicated columnists why they are not writing about what in earlier times would have been their chosen stories, they tell me that editors demand that they address what has already been “in the news.”

I began to notice our various citizen groups experiencing difficulty in getting “newstime” or “newsprint” because their subjects—clearly newsworthy and affecting people directly—weren’t already in the corporate news media by some high profile story. Among the many severely neglected topics are looted pensions, food and auto safety, hospital malpractice, a predatory pharmaceutical industry, massive billing frauds, the dark sides of corporate welfare, an unauditable Pentagon budget and the devastation caused by stock buybacks. The paucity of “beat” reporters due to ever-winnowing newsroom populations has worsened this spreading blackout. Meanwhile, thousands of commercial radio stations using our public airwaves for free are increasingly syndicated and automated.

This contagion has spread to public radio and public broadcasting. They too have to be, to use the current euphemism, “contemporary.” More experienced and thoughtful perspectives, expressed in paragraphs rather than Tweets, are not “contemporary.” Former regular guests on NPR and PBS, if they are not part of the commentariate for the day’s “breaking news” are no longer regular. Even the prime national and state programs for NPR and PBS are falling in line. Check out the exclusion on Charlie Rose and Judy Woodruff’s Newshour.

Last year, the mass media declined to cover any part of 8 days at our “Breaking Through Power” convocations at Constitution Hall in Washington, DC. These were gatherings of more accomplished civic doers and advocacy leaders—many having fundamentally shaped our country for the better— mobilizing around more reforms and redirections than ever brought together in modern American history. They came prepared to share their compelling stories, warnings and plans for action with an eager press. They were not seen as breaking news and therefore “not contemporary” (see breakingthroughpower.org).

Even the estimable Minnesota Public Radio has narrowed its vision. I had complained about the cessation of interviews for my books, reports and commentaries in recent years. Nancy Cassutt, executive director of news and programming for Minnesota Public Radio explained: “we prefer to pick show topics using our editorial judgment about what is in the national conversation, once we do that we search for the voices with diverse opinions and backgrounds to build the show.”

Unfortunately it is not Minnesota Public Radio that determines what is in the national conversation. That choice comes from a very select group of producers, editors, performers and corporate advertisers from Washington, DC and New York City.

In today’s media ecosystem, I could not, for example, have been invited on Meet the Press to introduce my charges against the auto industry’s unsafe vehicles. Scientist Michael Jacobson could not have gotten national media for his revelations concerning the lethal effects of sugar, fat and salt in processed, non-nutritious foods. Likewise Dr. Sidney Wolfe could not have reached millions of people through national news networks and the Phil Donahue Show to alert the public about dangerous medicines. Because they were able to reach and inform the public, their groups expanded and changed America for the better.

Alas, no more such access. The fractured, increasingly cluttered and trivialized Internet is no substitute. The trends are getting worse, especially for younger people. Enough of us, individually or in new organizations, must reclaim the use of our FCC-licensed public airwaves, demanding conditions for serious programming in our community cable contracts and creating a climate for reading and contemplation in our educational institutions.

Remember the high points of American history. Major justice movements were achieved with one percent or less of the population serving as active citizens reflecting majority public opinion. That is what will lead to a more serious media and redefine for them what is truly “contemporary”, because what is portrayed as “contemporary” in the media should reflect the necessities of the people, and not the whims of media executives and advertisers.

If you want a different example of what is newsworthy, tune in to my weekly radio show, the Ralph Nader Radio Hour.

Chris Hedges: Out of Print

John Pilger: There Is a War on Journalism