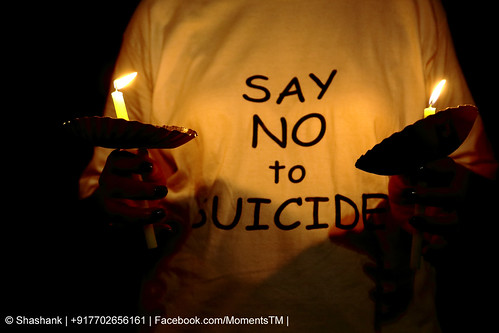 The pressures of modern life are colossal; for young people — those under 25 years of age — they are perhaps greater than at any other time. Competition in virtually every aspect of contemporary life, a culture obsessed with image and material success, and the ever-increasing cost of living are creating a cocktail of anxiety and self-doubt that drives some people to take their own lives and many more to self-abuse of one kind or another.

Amongst this age group today, suicide constitutes the second highest cause of death after road/traffic accidents, and is the most common cause of death in female adolescents aged 15–19 years. This fact is an appalling reflection on our society and the materialistic values driven into the minds of children throughout the world.

The World Health Organization (WHO) estimates that in total “close to 800,000 people die due to suicide every year, which is one person every 40 seconds. Many more attempt suicide,” and those who have attempted suicide are the ones at greatest risk of trying again. Whilst these figures are startling, WHO acknowledges that suicide is widely under-reported. In some countries (throughout Sub-Saharan Africa, for example) where stigma still attaches to suicide, it is not always recorded as the cause of death when in fact it should be, meaning the overall suicide figures are without doubt a great deal higher.

Unless there is fundamental change in the underlying factors that cause suicide, the WHO forecasts that by 2020 – a mere three years away, someone, somewhere will take their own life every 20 seconds. This worldwide issue, WHO states, is increasing year on year; it is a symptom of a certain approach to living — a divisive approach that believes humanity is inherently greedy and selfish and has both created, and is perpetuated by, an unjust socio-economic system which is at the root of many of our problems.

Suicide is a global matter and is something that can no longer be dismissed, nor its societal causes ignored. It is the final act in a painful journey of anguish; it signifies a desperate attempt by the victim to be free of the pain they feel, and which, to them, is no longer bearable. It is an attempt to escape inner conflict and emotional agony, persecution or intimidation. It may follow a pattern of self-harm, alcohol or drug abuse, and, is in many cases, but not all, related to depression, which blights the lives of more than 300 million people worldwide, is debilitating and deeply painful. As William Styron states in Darkness Invisible, “The pain of severe depression is quite unimaginable to those who have not suffered it, and it kills in many instances because its anguish can no longer be borne. The prevention of many suicides will continue to be hindered until there is a general awareness of the nature of this pain.”

Any suicide is a tragedy and a source of great sadness, particularly if the victim is a teenager, or someone in their twenties, who had their whole life ahead of them, but for some reason or another could not face it. As with all age groups, mental illness amongst young people is cited as the principle reason for, or an impelling cause of suicide, as well as for people suffering from an untreated illness such as anxiety anorexia or bulimia; alcohol and drug abuse are also regularly mentioned, as well as isolation.

All of these factors are effects, the result of the environment in which people — young and not so young — are living: family life, the immediate society, the broader national and world society. The values and codes of behavior that these encourage, and, flowing from this environment, the manner in which people treat one another together with their prevailing attitudes. It must be here that, setting aside any individual pre-disposition, the underlying causes leading to mental illness or alcohol/drug dependency in the first place are rooted.

Unsurprisingly young people who are unemployed for a long time; who have been subjected to physical or sexual abuse; who come from broken families in which there is continuous anxiety due to job insecurity and low wages are at heightened risk of suicide, as are homeless people, young gay and bi-sexual men and those locked up in prison or young offenders institutions. In addition, WHO states that, “Experiencing conflict, […] loss and a sense of isolation are strongly associated with suicidal behavior.”

Lack of hope is another key factor. Absence of hope leads to despair, and from despair flows all manner of negative thoughts and destructive actions, including suicide. In Japan, where suicide is the leading cause of death among people aged between 15 and 39 (death by suicide in Japan is around twice that of America, France and Canada, and three times that of Germany and the UK), the BBC reports that, “young people are killing themselves because they have lost hope and are incapable of seeking help.” Suicides began to increase dramatically in Japan in 1988 after the Asian financial crisis and climbed again after the 2008 worldwide economic crash. Economic insecurity is thought to be the cause, driven by “the practice of employing young people on short-term contracts.”

Hope is extremely important, hope that life will improve, that circumstances will change, that people will be kinder and that life will be gentler. That one’s life has meaning. Interestingly, in the aftermath of Princess Diana’s death in 1997, suicides in Britain increased by almost 20 per cent, and cases of self-harm rose by 44 per cent. To many people she was a symbol of compassion and warmth in a brittle, hostile world, and somehow engendered hope.

The list of those most vulnerable to suicide is general and no doubt incomplete; suicide is an individual act and flows from specific circumstances and a particular state of mind. Generalizations miss the subtleties of each desperate cry. Some suicides are spontaneous acts, spur of the moment decisions (as is often the case in Asian countries, where poison is the most common method of suicide), others may be drawn out over years, in the case of the alcoholic for example, punctuated perhaps by times of relief and optimism, only to collapse under the weight of life’s intense demands once more.

It is these constant pressures that are often the principle causes of the slide into despair and the desire to escape the agony of daily life. They are all pervasive, hard to resist, impossible, apparently, to escape. Firstly, we are all faced with the practical demands of earning a living, paying the rent or mortgage, buying food, and covering the energy bills etc. Secondly, there are the more subtle pressures, closely related to our ability to meet the practical demands of the day: the pressure to succeed, to make something of one’s life, to be strong – particularly of you’re a young man, to be sexually active, to be popular, to know what you want and have the strength to get it; to have the confidence to dream and the determination to fulfill your dreams. And if you don’t know what you want, if you don’t have ‘dreams’ in a world of dreamers, this is seen as weakness, which will inevitably result in ‘failure’. And by failure, is meant material inadequacy as well as unfulfilled potential and perhaps loneliness, because who would want to be with a ‘failure’?

These and other expectations and pressures constitute the relentless demands faced by us all, practical and psychological, and our ability to meet them colours the way we see ourselves and determines, to a degree, how others see us. The images of what we should be, how we should behave, what we should think and aspire too, the values we should adopt and the belief system we should accept are thrust into the minds of everyone from birth. They are narrow, inhibiting, prescribed and deeply unhealthy.

The principle tool of this process of psychological and sociological conditioning is the media, as well as parents and peers, all of whom have themselves fallen foul of the same methodology, and education.

Beyond reward and punishment

Step outside the so-called norm, stand out as someone different, and risk being persecuted, bullied and socially excluded. The notion of individuality has been outwardly championed but systematically and institutionally denied. Our education systems are commonly built on two interconnected foundations – conformity and competition – and reinforced through methods, subtle and crude, of reward and punishment. All of which stifles true individuality, which needs a quiet, loving space, free from judgment in which to flower. For the most sensitive, vulnerable and uncertain, the pressure to conform, to compete and succeed, is often too much to bear. Depression, self-doubt, anxiety, self-harm, addiction and, for some, suicide, are the dire consequences.

There are many initiatives aimed at preventing suicide amongst young people – alcohol/drug services, mental health treatment, reducing access to the means of suicide – and these are of tremendous value. However if the trend of increased suicides among young people is to be reversed it is necessary to dramatically reduce the pressures on them and inculcate altogether more inclusive values. This means changing the environments in which life is lived, most notably the socio-economic environment that infects all areas of society. Worldwide, life is dominated by the neoliberal economic system, an extreme form of capitalism that has infiltrated every area of life. Under this decrepit unjust model everything is classed as a commodity, everyone as a consumer, inequality guaranteed with wealth and power concentrated in the hands of a tiny percentage of the population — 1% of 1%, or less in fact. All facets of life have become commercialized, from healthcare to the supply of water and electricity, and the schooling of our children. The educational environment has become poisoned by the divisive values of the market place, with competition at the forefront, and competition has no place in schools and universities, except perhaps on the sports field: streaming and selection should be vetoed totally and testing, until final exams (that should be coursework based), scrapped.

All that divides within our societies should be called out and rejected, cooperation inculcated instead of competition in every area of human endeavor, including crucially the political-economic sphere; tolerance encouraged, unity built in all areas of society, local, national and global. These principles of goodness together with the golden seed of social justice – sharing – need to be the guiding ideals of a radically redesigned socio-economic paradigm, one that meets the needs of all to live dignified, fulfilled lives, promotes compassion, and, dare I say, cultivates love. Only then, will the fundamental causes of suicide, amongst young people in particular, but men and women of all ages, be eradicated.

Why the World is Crazy

One thought on “Wasted Lives: The Worldwide Tragedy of Youth Suicide by Graham Peebles”