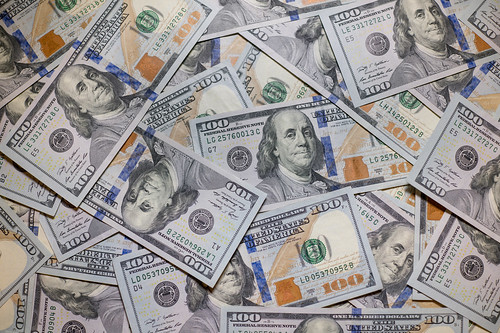 The policy of guaranteeing every citizen a universal basic income is gaining support around the world, as automation increasingly makes jobs obsolete. But can it be funded without raising taxes or triggering hyperinflation? In a panel I was on at the NexusEarth cryptocurrency conference in Aspen September 21-23rd, most participants said no. This is my rebuttal.

In May 2017, a team of researchers at the University of Oxford published the results of a survey of the world’s best artificial intelligence experts, who predicted that there was a 50 percent chance of AI outperforming humans in all tasks within 45 years. All human jobs were expected to be automated in 120 years, with Asian respondents expecting these dates much sooner than North Americans. In theory, that means we could all retire and enjoy the promised age of universal leisure. But the immediate concern for most people is that they will be losing their jobs to machines.

That helps explain the recent interest in a universal basic income (UBI) – a sum of money distributed equally to everyone. A UBI has been proposed in Switzerland, trials are beginning in Finland, and there is a successful pilot ongoing in Brazil. The cities of Ontario in Canada, Oakland in California, and Utrecht in the Netherlands are planning trials; two local authorities in Scotland have announced such plans; and politicians across Europe, including UK Labour Party leader Jeremy Corbyn, have spoken in favor of the concept. Advocates in the US range from Robert Reich to Mark Zuckerberg, Martin Luther King, Thomas Paine, Charles Murray, Elon Musk, Dan Savage, Keith Ellison and Paul Samuelson. A new economic study found that a UBI of $1000/month to all adults would add $2.5 trillion to the US economy in eight years.

Welfare can encourage laziness, because benefits go down as earned income goes up. But studies have shown that a UBI distributed equally regardless of income does not have that result. In 1968, President Richard Nixon initiated a successful trial showing that the money had little impact on the recipients’ working hours. People who did reduce the time they worked engaged in other socially valuable pursuits, and young people who were not working spent more time getting an education. Analysis of a similar Canadian trial found that employment rates among young adults did not change, high-school completion rates increased, and hospitalization rates dropped by 8.5 percent. Larger experiments in India have reached similar results.

Studies have also shown that it would actually be cheaper to distribute funds to the entire population than to run the welfare services governments engage in now. It has been calculated that if the UK’s welfare budget were split among the country’s 50 million adults, each of them would get £5,160 a year.

But that is not enough to cover basic survival needs in a modern economy. Taxes would need to be raised, additional debt incurred, or other programs slashed; and these are solutions on which governments are generally unwilling to embark. The other option is “qualitative easing,” a form of central bank quantitative easing in which the money flows directly into the real economy rather than simply into banks. In Europe, politicians are taking another look at this once-derided “helicopter money.” A UBI is being proposed as monetary policy that would stimulate productivity without increasing taxes. As Nobel prize-winning economist Joseph Stiglitz, former senior vice president of the World Bank, explains:

“… [W]hen the government spends more and invests in the economy, that money circulates, and recirculates again and again. So not only does it create jobs once: the investment creates jobs multiple times.

The result of that is that the economy grows by a multiple of the initial spending, and public finances turn out to be stronger: as the economy grows, fiscal revenues increase, and demands for the government to pay unemployment benefits, or fund social programmes to help the poor and needy, go down. As tax revenues go up as a result of growth, and as these expenditures decrease, the government’s fiscal position strengthens.”

Why “QE for the People” Need Not Be Inflationary

The objection to any sort of quantitative easing in which new money gets into the real economy is that when the money supply grows too large and consumer prices shoot up, the process cannot be reversed. If the money is spent on a national dividend, infrastructure, or the government’s budget, it will be out circulating in the economy and will not be retrievable by the central bank.

But the government does not need to rely on the central bank to pull the money back when hyperinflation hits (assuming it ever does – it has not hit after nearly nine years and $3.7 trillion in quantitative easing). As Prof. Stiglitz observes, the money issued by the government will return to it simply through an increase in fiscal revenues generated by the UBI itself.

This is due to the “velocity of money” – the number of times a dollar is traded in a year, from farmer to grocer to landlord, etc. In a good economy, the velocity of the M1 money stock (coins, dollar bills, demand deposits and checkable deposits) is about seven; and each recipient will pay taxes on this same dollar as it changes hands. According to the Heritage Foundation, total tax revenue as a percentage of GDP is now 26 percent. Thus one dollar of new GDP results in about 26 cents of increased tax revenue. Assuming each of the seven trades is for taxable GDP, $1.00 changing hands seven times can increase tax revenue by $7.00 x 26 percent = $1.82. In theory, then, the government could get more back in taxes than it paid out.

In practice, there will be a fair amount of leakage in these returns due to loopholes and deductions for costs. But any shortfall can be made up in other ways, including closing tax loopholes, taxing the $21 trillion or more hidden in offshore tax havens, or setting up a system of public banks that would collect interest that came back to the government.

A working paper published by the San Francisco Federal Reserve in 2012 found that one dollar invested in infrastructure generates at least two dollars in “GSP” (GDP for states), and “roughly four times more than average” during economic downturns. Whether that means $4 or $8 is unclear, but assume it’s only $4. Multiplying $4 by $0.26 in taxes would return the entire dollar originally spent on infrastructure to the government, year after year. For precedent, consider the G.I. Bill, which is estimated to have cost $50 billion in today’s dollars and to have returned $350 billion to the economy, a nearly sevenfold return.

What of the inflation formula typically taught in economics class? In a May 2011 Forbes article titled “Money Growth Does Not Cause Inflation!”, Prof. John Harvey demonstrated that its assumptions are invalid. The formula is “MV = Py,” meaning that when the velocity of money (V) and the quantity of goods sold (y) are constant, adding money (M) must drive up prices (P). But as Harvey pointed out, V and y are not constant. As people have more money to spend (M), more money will change hands (V), and more goods and services will get sold (y). Demand and supply will rise together, keeping prices stable.

The reverse is also true. If demand (money) is not increased, supply or GDP will not go up. New demand needs to precede new supply. The money must be out there searching for goods and services before employers will add the workers needed to create more supply. Only when demand is saturated and productivity is at full capacity will consumer prices be driven up; and they are not near those limits yet, despite some misleading official figures that omit people who have quit looking for work or are working only part-time. As of January 2017, an estimated 9.4 percent of the US population remained unemployed or underemployed. Beyond that, there is the vast expanding potential of robots, computers and innovations such as 3D printers, which can work 24 hours a day without overtime pay or medical insurance.

The specter invariably raised to block legislators and voters from injecting new money into the system is the fear of repeating the notorious hyperinflations of history – those in Weimer Germany, Zimbabwe and elsewhere. But according to Professor Michael Hudson, who has studied the question extensively, those disasters were not due to government money-printing to stimulate the economy. He writes:

“Every hyperinflation in history has been caused by foreign debt service collapsing the exchange rate. The problem almost always has resulted from wartime foreign currency strains, not domestic spending. The dynamics of hyperinflation traced in such classics as Salomon Flink’s The Reichsbank and Economic Germany (1931) have been confirmed by studies of the Chilean and other Third World inflations. First the exchange rate plunges as economies pay for foreign military spending during the war, and then – in Germany’s case – reparations after the war ends. These payments led the exchange rate to fall, increasing the price in domestic currency of buying imports priced in hard currencies. This price rise for imported goods creates a price umbrella for domestic prices to follow suit. More domestic money is needed to finance economic activity at the higher price level. This German experience provides the classic example.”

In a stagnant economy, a UBI can create the demand needed to clear the shelves of unsold products and drive new productivity. Robots do not buy food, clothing, or electronic gadgets. Demand must come from consumers, and for that they need money to spend. As robots increasingly take over human jobs, the choices will be a UBI or to let half the population starve. A UBI is not “welfare” but is simply a dividend paid for living in the 21st century, when automation has freed us to enjoy some leisure and engage in more meaningful pursuits.

Debate: Basic Income: A Way Forward for the Left?

Universal Basic Income–Not The Answer, Yet But Needs To Be Discussed by Graham Peebles

11 thoughts on “Can UBI Be Funded Without Raising Taxes or Triggering Hyperinflation? by Ellen Brown”