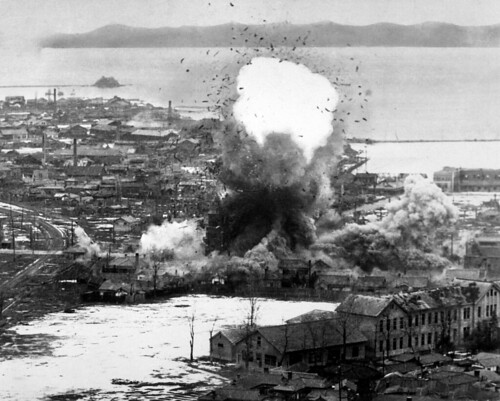 “Throughout the world, on any given day, a man, woman or child is likely to be displaced, tortured, killed or ‘disappeared’ … More often than not, the United States shares the blame.” — Amnesty International, 1996

As the US threatens to decimate North Korea again – if not the entire planet, given Donald Trump’s chillingly casual approach to the use of nuclear weapons – an article has revealed the criminal legacy remaining from America’s last attack, ending sixty-four years ago, on a country smaller than Mississippi. (North Korea is a landmass of 120,540 square kilometers, Mississippi is 125,443 square kilometers.)

“Experts say it will take a hundred years to clean up all of the unexploded ordnance”, says Major Jong Il Hyon: “but I think it will take much longer.”

Major Jong has lost five colleagues in the still ongoing ordnance disposal work and “carries a lighter one gave him before he died. He also bears a scar on his left cheek from a bomb disposal mission gone wrong.”

In Hamhung, the country’s second largest city three hundred and seventy mortar rounds were found in an elementary school playground in October last year, with a rusted, lethal round discovered nearby in February this year.

“Bombs, mortars and pieces of live ammunition” are still found in “thousands. Virtually all of it is American”, but “over a dozen” countries “fought on the US side and every now and then their bombs will turn up as well.”

In the region this lethal legacy is mirrored in: “Vietnam, Cambodia, Laos and even Japan”, with a “huge amount of unexploded ordnance” needed to be disposed of by those courageous enough to risk their lives, daily, doing it.

The scale of the regional horror is near incomprehensible. For example:

“From 1964 to 1973, the U.S. dropped more than two million tons of ordnance on Laos during 580,000 bombing missions – equal to a planeload of bombs every eight minutes, twenty-four hours a day, for nine years …”

It is thought that possibly a third of the bombs did not explode and over twenty thousand people have been killed by unexploded ordnance since.

Less than 1% of these munitions have been destroyed, with commensurate deaths and maimings ongoing.

The US is undoubtedly the “Leader of the Free World” in one thing: killing. It is also clearly the undisputed king of overkill and the most murderous of legacies, ensuring its actions will never be forgotten or indeed forgiven by the populations affected. Which, of course, is why North Korea is trying to ensure it is powerfully enough armed to deter another attack. Whatever it has or has not achieved in this respect, compared to America’s planet threatening nuclear arsenal, it is utterly insignificant, for all Washington’s undiplomatic, bombastic bluster.

Secretary of State Rex Tillerson’s statement regarding North Korea that: “(Trump) has made it clear to me to continue our diplomatic efforts – which we are. As I’ve told others, those diplomatic efforts will continue until the first bomb drops”, is hardly likely to encourage anything but frantic efforts at armed deterrence – whilst still clearing the poisoned legacy from over half a century ago.

Major Jong’s “bomb squad is one of nine … one for each province. His unit alone handled 2,900 left over explosives – including bombs, mortars and live artillery shells, last year.” This year: “they have already disposed of about 1,200.”

North Korea has said that 400,000 bombs were dropped on the capitol, Pyongyang: “roughly one bomb for every resident at the time.” 32,500 tons of napalm was also dropped on the country.

Some bombs are not easily recognizable to the untrained eye, Major Jong pointed out, thus an eleven year old lost his fingers investigating an item he had found. There are a “surprising variety.” He described one as a “butterfly bomb” which had “wing like attachments to disperse small ‘bomblets’ over a wider area.” It was “devised by the Nazis in World War 11. The US revised its design and used them in North Korea”, points out Associated Press.

“I’m sure that my daughter’s generation will also suffer from this problem”, said Major Jong: “I want the world to know.”

Historian Charles Armstrong of Columbia University points out that the saturation bombing: “marked something of a turning point for the United States and was followed by the use of an even heavier version during the Vietnam war.”

He also makes the point, ignored by the blinkered and apparently supremely ignorant new incumbent in the White House that:

“To this day the North Korean Government and media point to the American bombing as a war crime and a major justification for the continued mobilization of the North Korean people – as well as the development of nuclear weapons – in defence against nuclear attacks.”

Has anyone on Capitol Hill heard of “cause and effect”?

Korea Solution Needs US to Sign a Peace Treaty by Finian Cunningham + Wilkerson: Trump a ‘Diplomatic Fiasco’ at the UN