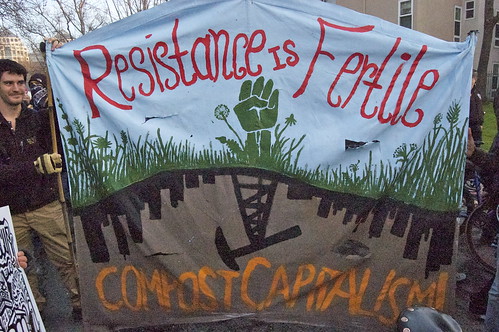 The Essays of The Man From the North by Rivera Sun
Writer, Dandelion Salad
Originally published December 14, 2016
November 14, 2017

We are serving ourselves up on silver platters to the oligarchs and giant corporations. We have apples of misinformation in our mouths and sprigs of patriotic parsley tucked behind our ears. Must we complacently acquiesce to being pot-roasted pigs? Rise up!

The situation is more than intolerable . . . it is ridiculous . . . it is obscene. Our citizenry behaves like swine in the feedlots of the giant corporations and their rich owners. We eat the swill they slop down of toxic food, poisonous lies, mind-numbing media, and soul-crushing policies of oppression. We roll in the muck too moribund to rise up and organize for life, liberty, and love!

Have you ever seen a wild boar? Hairy, black, powerful, untamed, muscular? Have ever seen the wild sow, alert, protective and nurturing of her young? Have you seen the natural liveliness and intelligence of the lithe, quick piglets raised in woodlands and meadows, not muck and feedlots?

Are you content to live out your days, numbed and enslaved, slated for the slaughterhouse? To be destined only to put profits into rich people’s pockets? To be basted in lies and roasted in the fire of injustice? To be carved up slice-by-slice and devoured by gluttons? To condemn your children to the same fate?

Before there were masters and owners, overseers and butchers, merchants and chefs, the pig was wild, untamed, and free. It chose where it roamed. It ate when hungry. It rested when tired.

It is said that the pig is more intelligent than the dog. Yet, most of its species is enslaved to the greed of human cravings. The human being is allegedly far more intelligent than the swine, and yet, under the surface of our acculturation, are we not locked in feedlots of work, rent, bills, and debt? Are not our whole lives one long production line for rich people’s profits? Is not our freedom as equally illusory as the pig’s, lasting only as long as no one attempts to break free?

The Roots of Resistance

The Roots of Resistance is here . . . and you can join in the fun of the Community Publishing Campaign to launch this novel into the world! Be the first to read the book! Pick up copies for friends! Support Rivera Sun and connect this novel to people far and wide.

All of your favorite characters from The Dandelion Insurrection are back! Charlie Rider and Zadie Byrd Gray may have won a revolution, but “they’ve got more problems than centipedes have legs” – as lawyer Tansy Beaulisle puts it.

Author Rivera Sun is launching the Community Publishing Campaign for The Roots of Resistance, sequel to The Dandelion Insurrection. Find out more and get the book here. Support the campaign, get a book for yourself and for friends, enjoy this personal message from Rivera Sun, and tell others that this great new novel is here! Find Rivera Sun’s other works at www.riverasun.com.

24 thoughts on “What Would Happen If We All Refused To Go Quietly To The Slaughterhouse? + The Roots of Resistance”