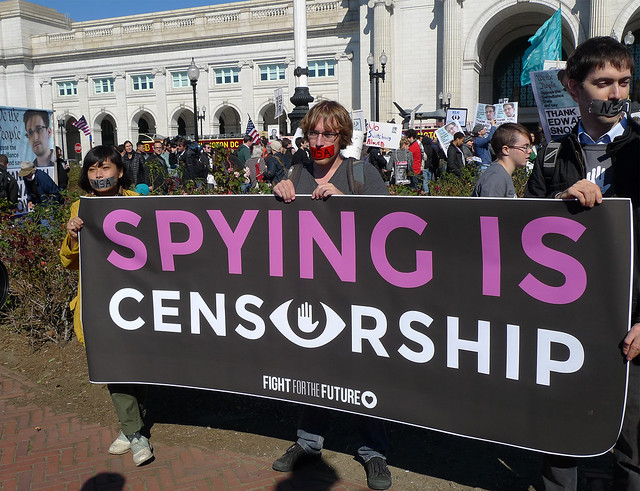 The Essays of The Man From the North by Rivera Sun
Writer, Dandelion Salad
November 21, 2017

Censorship is the foe of freedom. It comes in many forms. The choking grip of control silences dissent. The bullhorns of propaganda blare out lies and fictions of consent. The maddened clench of greed stifles outlets for a diversity of expression, creativity, opportunity, and invention. The lurking spies of mass surveillance send chills down once-fearless spines. The data collectors of corporations mine our lives for ways to shrink-wrap our worldviews into commoditized sales pitches.

We think of censorship as cutting off a voice or silencing an outspoken dissenter. It is much worse … censorship today happens at every level of society from our minds to our platforms to our search engines. We dream in tight little boxes of permissible ideas. We speak only what others wish to hear. We gain access to platforms only by conforming to comfortable lies. If an uncomfortable truth manages to leap the hurtles and reach the outer rim of a listener’s ears, then the listener quickly brushes it aside, dismissing it as conspiracy or nonsense. The totalitarianism of our censorship happens inside each person. Critical thinking skills are shut off and intellect is replaced with blind conformity and dogmatic loyalty to patriotism, religious ideology, and brand names.

In an era of uncomfortable truths, the choking of truth is the strangulation of our lives. If we cannot speak about catastrophic, man-made climate change; or the concentration of wealth and simultaneous economic collapse that is impoverishing millions; or the corporate and oligarchic takeover of our country; or the creeping and pervasive spying of the mass surveillance apparatus; or the propaganda and control of corporate advertising; if we cannot speak of and challenge these things, we will continue to die of these injustices. Our death knell is a resounding silence built of censorship and the shrieking sales pitches of profitable lies.

Every human possesses the skills to resist this. We were each born with the ability to shout out that the emperor has no clothes. To speak truth in a time of lies takes courage, but not superhuman powers. We must listen and speak truth. We must discourse – not dismiss – one another. We have to build the means of honest communication. Democracy can be resurrected by breaking silence and listening to complex, uncomfortable truths. Tear your eyes away from mind-numbing sales pitches. There is more to life than blind consumption. We are humans, not locusts. The life of our Earth, our communities, and ourselves, depend on our willingness to break through the many facets of censorship and let truth, freedom, and democracy arise.

16 thoughts on “Censorship: The Death Knell of Democracy”