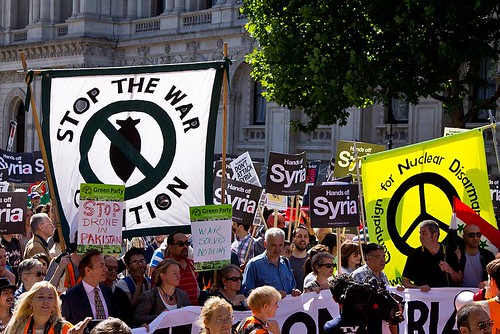 I confess that I have throughout the terror-producing “war on terror” envied and identified with the British peace movement. Here’s a country with a capital of nearly 13 times the population of Washington D.C., big rally and march locations, the rest of the country no farther away than an American will drive for a really good concert, and (not coincidentally, I think) peace as part of the political conversation. Plus, of course, Parliament’s opposition to bombing Syria in 2013 was a huge help in delaying U.S. bombing.

When I see people here in the United States cheerfully campaigning for presidential or Congressional candidates as if they actually like them and share a world view with them, I of course feel left out. I want to disarm and transition away from militarism to peaceful sustainable societies. I want to denounce the wars and the weapons dealing as harmful and endangering and environmentally destructive, rather than defensive or necessary or heroic. I don’t share these views with anyone on CNN or MSNBC.

But when people accuse me of somehow choosing to be a radical as if it were a personality trait rather than a result of how far public policy is from what I consider reasonable or decent, I can prove them all wrong by simply pointing across the pond. Let Jeremy Corbyn run for office in Virginia and I’ll run around knocking on doors and littering yards with signs as much as the next guy — more, I bet.

Stop the War’s analysis of foreign policy failure points out, in general and case-by-case, how “fighting terrorism” by bombing and invading has had exactly the opposite effect. In various countries where Britain has joined with the United States in wars, just about every type of war has been tried, often more than once, and Trump is in most cases simply escalating the least successful approaches.

In Afghanistan, Chris Nineham predicts that the U.S.-backed government will soon control just Kabul. I predict it will have a hard time even with that, as the population explodes with people fleeing the countryside, as the water is depleted, as the trash and sewage pile up, and as those who can recall anything resembling peace die off.

In Yemen, Daniel Jakopovich makes the same demands of the British government that we make of the U.S., namely stop selling Saudi Arabia weapons, stop participating in the war, and advocate for peace.

In Iraq, Shabbir Lakha recounts the counterproductive creation of groups like ISIS now being compounded by repeating the same murderous approaches to saving places by destroying them. I do wish Lakha hadn’t written that alternatives to war had not been exhausted when the U.S.-and-friends attacked in 2003, because it implies that in some theoretical case such alternatives could be exhausted.

In Syria, the Stop the War authors thread the needle of endless disagreements about this sad and ruined land by opposing overthrow without supporting the Syrian government. Stop the bombing, they say, aid the refugees, cut off support for Saudi Arabia’s crimes, and support a peace process without preconditions. Yes, exactly right. But quite disappointing that Stop the War Coalition calls Russian war making legal, even while opposing it. Legal because invited by the Syrian government? But who gave the Syrian government the right to commit the crime of war? Who gets to declare what’s a real nation and what is not, so that wars fought against non-real nations don’t count as real wars?

Stop the War claims Britain is now the second leading weapons dealer on earth, and that NATO members spend 70% of world spending on militarism, not counting NATO allies like Saudi Arabia, Japan, Australia, and South Korea. This, too, is a very useful perspective for us to take up in the United States and everywhere. It’s not just that the U.S. dwarfs all other militaries in its pursuit of global domination. It’s also that over three-quarters of militarism on earth is all on one team in desperate search of worthy opponents and customers, which it will manufacture if necessary.

Failed: Why We Need A New Foreign Policy A Stop the War Coalition Briefing – Autumn 2017

Abby Martin: All This Shit Doesn’t Matter–Every Issue Must Be Seen Through the Lens of the US Empire

Mark Mason: The U.S. Is The Biggest Terrorist Organization On Earth

8 thoughts on “FAILED: Foreign Policy as We Know It by David Swanson”