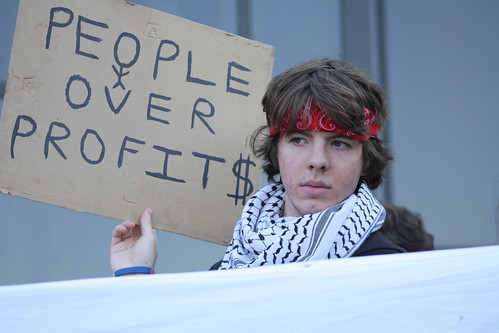 Competition is a pervasive element within all aspects of contemporary society, it is thought by many to be a positive and natural part of the human condition, and one that drives innovation and change. Loyal Believers in Competition assert that in the world of business it serves the consumer by driving down prices and creating virtually unlimited material choice, and will, some claim, be the driving force for environmental salvation. To be blessed with a competitive spirit, it is argued, strengthens an individual’s ability to succeed and overcome rivals; it stimulates ‘development’ and advances in all areas — after all if the urge to compete and achieve were negated then what would motivate action?

Whilst there is a degree of truth in some of these claims, the negative impacts are a great deal more serious and far-reaching.

Competition, and the broader economic doctrine of which it is an essential part, promotes conflict and maintains division; it feeds intolerance and sets individuals and groups (regions and nations for example) against each other. Selfishness and greed are encouraged, abundance and dominance — of others, of a market or a region, of a way of thinking, the goal. Apple wants to monopolize the mobile phone market for example, and would happily drive all its competitors out of business – annihilate the opposition. This is true of all companies of course — naturally, because they are in business for one reason, to make money, and the larger the market share the greater the profit. Yes, certain organizations may have an ‘ethical framework’ within which they operate, but faced with a choice between profits and ethics, profit commonly triumphs.

Achieving the ‘prize’ – succeeding, is the fire within the competitive furnace, whether the aim is status, a higher salary, increased market-share or greater financial profit. Within the current polluted paradigm, Governments design policies which they believe will enable their nation, (some nations are more prone to this than others), to ‘compete in the world-wide marketplace’, to capitalize on the opportunities that the digital age offers, and so on. Education, which has been totally contaminated by competition, is seen principally as a supplier for industry, with programmes designed to produce young people with the skills they need to compete internationally – to create the Workers of the Future. Schoolchildren are made to compete with a certain academic standard and, perhaps indirectly, more broadly with their classmates; streaming is widespread and even takes place in nursery classes in some countries, with two year olds being separated from one another based on ‘ability’.

Countries are spoken of as if they were mere corporations, with Government cabinet members operating more like boards of directors than an elected group representing the people. Prime Ministers and Presidents behave like travelling salesmen/women, jetting around the world promoting the nation’s wares. Virtually all policy decisions are made based on a desire to strengthen the economy in the face of increased global competition, with the health of a nation limited to the strength or otherwise of its economy. Happiness, contentment and collective harmony are either totally ignored or considered to be side effects of a strong economy and a materially wealthy society. Yet countries with buoyant economies – America, Britain and Japan for example – are littered with social problems, mental health issues and of course inequality.

The need for cooperation

The world is besieged by a range of problems, many, if not all of which are firmly rooted in outdated socio-economic structures. The interconnected environmental catastrophe and the threat of nuclear conflict constitute the most critical issues facing humanity. Both threaten the survival of the human race and the planet, and, if we are to face these global issues, both demand a totally new approach. Then there is the worldwide epidemic in mental health illness, what we might call ‘The Crisis of Consciousness’, which to a significant degree flows this from the values and behaviour promoted by the socio-economic system.

To meet these unprecedented crises it is imperative that competition be laid aside in favour of cooperation. Governments, industry, specialist bodies and civil society all need to work cooperatively, and, crucially, cooperation needs to be allowed to take place within the consciousness of the individual. This will naturally happen when the sociological elements that lead to internal conflict are removed, allowing harmony and contentment to gently flower.

The old ideologically-based systems with their divisive materialistic values are incapable of meeting the needs of the time, and as growing numbers of people realize, must be cast aside in favour of altogether more humane, just and synthesizing methods. At the core of any alternative approach must be the aim to create an environment in which unity is sensed and realized. This is the single most important step for humanity; all flows from this unifying seed, all divisions fall away in light of this experience.

Humanity is one, and the structures within which we live, and the values and behaviour they encourage need to allow for the recognition of this essential truth. To this end certain ‘Principles of Goodness’, many of which have been held as ideals for generations and are now being widely spoken of, need to be actively inculcated. Chief among them is cooperation, together with sharing; cooperation needs to replace competition in all areas, tolerance substituted for prejudice and hate, sufficiency and sharing encouraged in place of excess and greed.

As Albert Einstein rightly said, we must “abandon competition and secure cooperation [as] the central fact in all our considerations of international affairs; otherwise we face certain disaster. Past thinking and methods did not prevent world wars. Future thinking must prevent wars…The stakes are immense, the task colossal, the time is short.” As well as areas of governance, and global issues such as climate change cooperation needs to become the guiding light within all matters economical. It is here that the fire of competition has been lit and from here under the banner of commercialization and market forces that it has spread, and it is here that it must be extinguished.

The purpose and methods of business need to be re-defined; competition and the profit motive (alone) need to be negated, cooperation, collective endeavour and social responsibility encouraged. The world does not need multiple companies making and selling the same things; it is absurd. Yes, some degree of choice is desirable, but high quality goods, made (increasingly by machines) in an environmentally sustainable manner to serve the needs of humanity should be the aim, and with a shift in attitudes away from material greed and competition-led division, such a rational development becomes possible.

When competition is replaced by cooperation, the tendency towards comparison and conformity will also fade, allowing cooperation with oneself to take place. The desire to conform to an image of self promoted by parents, friends and society at large, to compete with others — siblings, classmates, work colleagues and so on — which is widespread, gives rise to notions of superiority and inferiority and both exert pressures of one kind and another, resulting in internal conflict, anxiety and other mental health illnesses. Within an atmosphere of cooperation and understanding this pressure, which is perhaps most heavily felt by young people (under 30s), will quickly dissipate allowing tolerance of differences, indeed celebrations of diversity to take place.

Cooperation is a fundamental quality of the time; it sits within a Trinity of the Age alongside Unity and Sharing. The expression of each of these galvanizing principles strengthens and expands the manifestation of the other two; cooperation naturally evokes acts of sharing, which builds unity; likewise, when we unite, cooperation and sharing occur. The introduction of these essential Principles of Change into all areas of contemporary life will lay a foundation of social harmony and allow the socio-economic structures to be re-imagined to meet the needs of all.