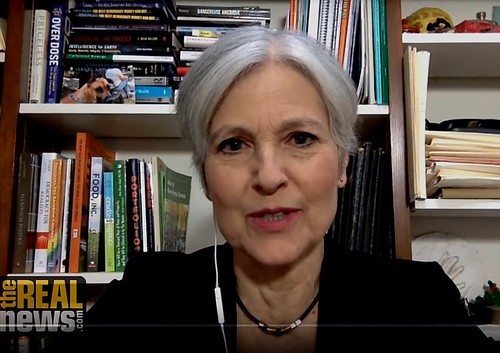 I’ve known Jill Stein for years. I knew weeks ago that the Senate “Intelligence” Committee was coming after her. I set up this petition to put reasonable limits on Russiagate. But I’ve not heard from Jill, nor had any secret communication from my good friend Vladimir, nor any such nonsense. I criticize the Russian and U.S. governments as they deserve it. Nearly three years ago, Russia tried to secretly hire me to spread its propaganda, and I said no and blogged about it. Although this happened right on Capitol Hill, no Congressional Committee gave a rat’s rear about it. It wasn’t part of their agenda. When I go on Russian media I say the same thing as on U.S. media, though sometimes with a particular focus on criticizing Russia — a nation I’ve never been paid a dime by or worked for as a volunteer.

END_OF_DOCUMENT_TOKEN_TO_BE_REPLACED

“What difference does it make to the dead, the orphans and the homeless, whether the mad destruction is wrought under the name of totalitarianism or in the holy name of liberty or democracy?” — Mahatma Gandhi, 1869-1948

When the UN was established on 24th October 1945, little over five months after the end of World War II, the organization’s stated aims were to prevent further devastating conflicts. In spite of the fact that 193 out of the world’s 195 nations are Member States, it has failed woefully.