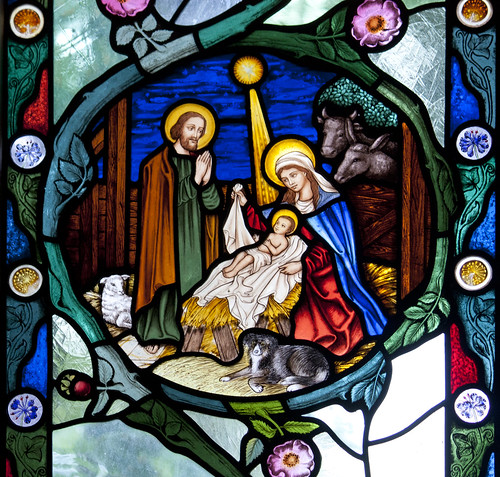 The fundamental ‘change’, engineered by the capitalist class in pursuit of profits, was to take the ‘Christ Story’ out of Christmas and to convert the weeks before and after into a consumer orgy. Aided and abetted by “secularist allies”, the capitalist class succeeded in eliminating any reference to the Christmas story, including the nativity scene and carols commemorating it, from public spaces. The significant social message, embedded in the Christmas story, is diluted by well-meaning cultural diversity-promoters, who demand equal time for ‘Hanukah’ (a Jewish narrative celebrating war, conquest and the slaughter of ‘apostate-assimilated-Hellenized’ Jews by traditionalists-fundamentalists – an event not even mentioned in the Hebrew Bible) and “Kwanzaa” (a holiday invented in the 1960’s by a cultural black nationalist preaching “self-help”). In place of the Christmas story, we have been given anachronistic ‘Nordic tales of tree worship’ and ‘gift giving’ by an obese bearded sweat-shop owner employing stunted slave workers *(‘Hi Ho, Hi Ho! It’s off to work we go; we work all day, we get no pay! Hi Ho, Hi Ho!’). This has become the dominant mythology driving the consumerist – profiteering of the global commercial – capitalist production chain.

Over time, it came to pass that ‘Christmas’ commercial sales became the centerpiece of capital accumulation. New and powerful sectors of capital entered the field. Finance capital, particularly credit card companies charging debtors usurious, interest rates over 20% per year, became central to and the principal beneficiaries of the great transformation of the Christmas story.

First, there was the language ‘excision’; the prefix was altered. Christ-mas became Xmas. The X symbol left out what constituted the original narrative and circumstances surrounding the celebration of the birth of Jesus.

Once the original class origins of the Christmas story were erased and the conflict between the absolutist state and civil society were abolished, the capitalist class inserted its own ‘props’ into the story: the Xmas tree became the site for consumer ‘gifts’; the Xmas ‘stocking’ had to be filled with consumer goods; the Xmas day image required the “happy family” opening up boxes of consumer goods – bought on credit at 20% interest rates.

The driving force behind the phony props and imagery is a command headquarters composed of capitalist manufacturers, wholesalers and retailers, market analysts, publicists, consultants, advertisers, investors, factory owners employing a vast army of low paid workers in Asian manufacturing sweatshops and huge corporate retail outlets with minimum wage salespeople. Christmas sales are the major profit maximizing occasion for the entire year: The success or failure of commercial capitalism rides on the profits accrued between November 30 and January 7. The entire capitalist edifice rests on the notion that “Xmas” is about large-scale buying and selling of consumer goods; it is about ensuring that class inequalities and racial divisions are temporarily blurred; that repressive police state intrusions into the privacy of family life are forgotten and that social solidarity is replaced by an orgy of individual consumerism.

‘Xmas’ is a time to celebrate massive profiteering, based on the indebtedness of the ‘masses’. It is a time for downsized workers to buy imported goods on credit from manufacturers who had relocated to low wage regions: Price consciousness replaces class consciousness. Picketing US retailers, who import from Bangladesh sweatshop death traps, where workers ‘earn’ $25 a month, goes against the ‘Xmas spirit’. ‘Buy and feel free’! It’s a time to be jolly!

The new secular, monetized ‘Xmas’ is a consumer-driven commercial event motivated by profits, advertisement and the mindless worship of ‘the market’. Family and neighborly relations are now tied to the cash nexus: Who buys or receives the most expensive gifts experiences the greatest gratification. ‘Gift giving’ is based on ‘consumer spending’; who could imagine any alternative!

Millions of atomized individuals compete to buy the most commodities that their credit/debit cards can cover. ‘Virtue’ becomes ‘success’ in the frantic engagement with the market. From the perspective of political power, individual consumerist consciousness means submission to ‘the market’ as well as submission to the ruling class, which dominates ‘market relations’.

The entire ‘Xmas’ period highlights the fact that market relations between wage-earning/salaried individuals and commercial/financial elites take precedence over productive (and state) relations between capital and labor. In “the market” the struggle is between consumers over commodities, overseen by commercial capital. In the new Xmas story the consumer is the centerpiece; the market is the mediator of all social relations. The ‘Christ story’ has been relegated to a periphery, if not totally excluded. At most, the story is reduced to a birth scene witnessed by cows, sheep and three ‘Kings’.

The Politics of the Christmas Story

The protagonists of the Christmas story, Joseph and Mary, are a working class household living at a subsistence level. Joseph, a carpenter, is partially out of work and earns a minimum wage. They live frugally, spend their meager earnings on essentials and travel cheaply on a donkey. To escape a repressive government they migrate in search of security, hoping to find a new home. The pregnant Mary and her unemployed husband Joseph look for sympathy and solidarity among the poor. They knock on doors but the landlords send them away. Only a poor farmer offers them a place – they can share a barn with the sheep and cows.

In the face of an uncertain future and a troubled present, Mary and Joseph receive material support from local residents in Bethlehem. Three wise men (the Magi or mathematicians from Persia) are internationalists who travel to greet the new family. They show great concern for the new born baby Jesus by perhaps offering his family a scholarship so he can study mathematics and science…. The coming together of local neighborhood people and the three educated “outsiders” to celebrate the birth of Christ and offer support to the homeless family, dispossessed migrants, has been an event for wonder and celebration.

Community solidarity, the sharing of food, shelter, learning and fraternal good cheer, in the face of persecution by a criminal state and an avaricious ruling class, defines the spirit of Christmas. The Christmas story affirms the virtues of social solidarity and not individual consumerism. It defines a moment in which the deep bonds of humanity displace the shallow comfort of commodities. It is the celebration of a moment in which the values and virtues of breaking bread in a fraternal community take precedence over the accumulation of wealth.

The Christmas story does not resonate with the owners, investors and publicists of big commercial enterprises who have converted the multitude into worshipers of their little plastic cards. Taking ‘Christ out of Christmas’ and destroying the joy and fellowship and solidarity of shared humanity embodied in the celebration of the birth of Christ is essential in order to continue to accumulate wealth. Putting the ‘Christ story’ back into Christmas is a step toward defeating consumerist consciousness and recreating social solidarity, so necessary for ending injustice.

Tis the Season To Wage Boycotts

12 thoughts on “Christmas Versus Xmas: A Political Reading by James Petras”