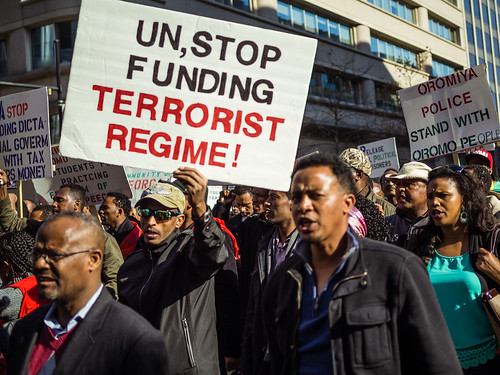 In an attempt to gag the people, a highly repressive State of Emergency was imposed in August 2016. It failed, the protests continued, the movement strengthened. The regime then tried to inflame ancient ethnic differences amongst various groups by staging attacks using plain clothed security personnel. In the border region of Oromo and the Ogaden Tesfaye Robela of the Ethiopian Parliament claims that over 10,000 people have been killed. ESAT News (the sole Ethiopian independent broadcaster) quotes the findings of a parliamentary report into the ethnic clashes, which concluded that: “based on interviews with victims of the violence, squarely puts the blame on Somali Region Special Police, local police and militia for perpetrating the killings.” The Liyu Police is controlled by the Ethiopian military.

Despite these attempts to extinguish the movement for change, the people of Ethiopia are continuing to demand freedom, justice and democracy; this time they will not be silenced. The minority powers within the ruling EPRDF coalition – The Oromo Peoples’ Democratic Organization (OPDO) and the Amhara National Democratic Movement (ANDM) have been empowered by the popular uprising and there are signs that they are at last standing up to the majority TPLF members. Under pressure from the OPDO and ASDM and in a further attempt to distract attention from the protests and undermine the protestors’ claims, on 3rd January the government put out a convoluted statement relating to political prisoners.

The Prime-Minister Hailemariam Desalegn said that the regime would release “some political prisoners”, prisoners that for the last 27 years they have denied even existed. ESAT News (which is based in Europe and America) reports he went on to announce that, “members of political parties and other individuals would be released to widen the political and democratic space” and that “the government would review the cases of certain individuals affiliated with political parties, including party leaders, [and] in some cases, charges would be dropped or people would be released or pardoned, depending on investigation results.”

His words, which have been widely reported in mainstream media, were not only disingenuous they were ambiguous and inconclusive. He failed to acknowledge that those imprisoned for expressing political dissent had been falsely incarcerated; repeatedly stating they were behind bars because they were guilty of breaking the law.

Whilst the release of any political prisoners at all would be a move in the right direction, in its present form the policy, if indeed it is a policy and not simply a public relations exercise aimed at international benefactors, is an insult to the thousands languishing in prison for no other reason than they disagree with the ruling TPLF. The statement is inadequate and needs clarification: who will be considered for release and when? Does it include opposition politicians charged with fictitious terrorist offences under the universally condemned Anti-Terrorist Proclamation of 2009? Will this long-overdue gesture mean that politicians who have been forced to live in exile for fear of arrest and imprisonment can safely return home?

These and other pressing questions need to be raised by opposition groups and human rights organizations, and indeed Ethiopia’s major donors — America, Britain and the European Parliament, all of which have allowed the TPLF to trample on human rights and the people for decades. Intense pressure must be applied on the government to articulate its intentions and, for once in their tyrannical reign, do the right thing and release all political prisoners, including journalists, bloggers, protestors and activists of all kinds.

It was also announced by the PM that Maekelewi prison in Addis Ababa, which has been used as a torture chamber by the TPLF for years, will be closed down, and rather bizarrely, turned into a modern museum, unless common sense prevails and it is demolished. This is a positive development but is again short on detail, there has been no mention of what will happen to the inmates. All political prisoners held there should be released unconditionally, and an independent international monitoring group established to oversee the release and or transfer of all other detainees.

The current of change

Despite being enshrined as rights within Ethiopia’s liberally worded constitution, for over two decades all forms of freedom of speech and political dissent have been virtually outlawed. Anyone who openly disagrees with or questions the ruling party is seen as a threat, and persecuted, arrested, imprisoned and, commonly, tortured. The Anti-Terrorism Act, together with The Charities and Societies Proclamation (CSP), both passed in 2009, are the primary tools of suppression within the regime’s Arsenal of Control.

Both laws have been widely criticized by Human Rights groups; responding to the CSP in 2012 Amnesty International said that, “The law has had a devastating impact on human rights work, both in terms of the practical obstacles it creates for human rights defenders, and in exacerbating the climate of fear in which they operate.” This is of course precisely what it was intended to do. Commenting on the Anti-Terrorist Proclamation when it was drafted, Human Rights Watch (HRW) stated that it provided “the Ethiopian government with a potent instrument to crack down on political dissent, including peaceful political demonstrations… It would permit [indeed has facilitated] long-term imprisonment and even the death penalty for ‘crimes’ that bear no resemblance, under any credible definition, to terrorism.”

For 27 years the TPLF group within the coalition have dominated all life in the country and like all such tyrannical regimes they have ruled through violence and fear. But we are living in new times; the days of tyrannical regimes is all but over, those that persist are sustained by the polluted energies of the past and are on their death bed. The people of Ethiopia sense that this is their time, that change is not only possible, but is coming.

The government’s half-baked move to release a few political leaders will not appease anyone, but should embolden many. It reveals a crack in the democratic facade presented by the regime, which must be split open under the force of sustained political activism, civil disobedience and public protest.

The minority members of the coalition — the OPDO and ANDM — now have an opportunity, indeed a responsibility to act boldly, to stand up and take a lead. As representatives of the two largest ethnic groups in the country they are in a position to do a number of things: demand The Anti-Terrorism Act, and The Charities and Societies Proclamation be immediately repealed, compile a comprehensive list of all political prisoners (working in cooperation with Amnesty International or The Ethiopia Human Rights Project), and vigorously press for their immediate release. Then, providing opposition politicians are released and political groups outside the country — including Ginbot 7 — are allowed to operate freely, work vigorously to campaign for fair and open elections (such a thing has never taken place in Ethiopia) to be held sometime in late 2019. This is a moment of significance in the country. There is an unstoppable force for justice and freedom sweeping across the world and Ethiopia is firmly within that current of change.

6 thoughts on “The People are Continuing to Demand Freedom, Justice and Democracy by Graham Peebles”