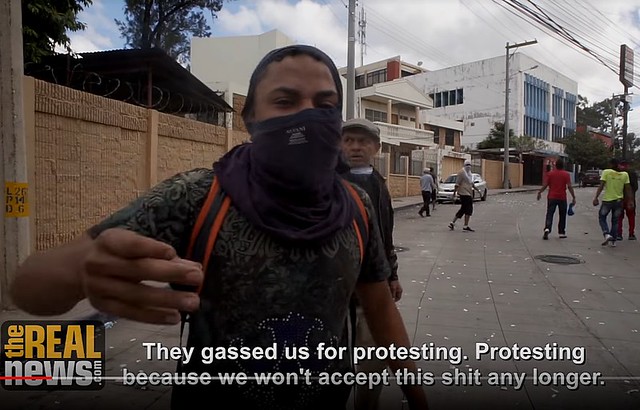 Special Report from the Hemisphere’s Most Controversial Inauguration.

“JESSE FREESTON: All three elections since the coup d’état in Honduras in 2009 have been marred by evidence of fraud employed to keep the ultra right National Party in power. During the most recent election of November 26th, the Opposition Alliance, formed to defeat the National Party, was ahead by 5% with 57% of the votes counted when the electoral tribunal computer system crashed. When counting resumed 24 hours later, the tendency reversed and the National Party led by President Juan Orlando Hernández, ended up winning by 1%.

The Economist Magazine published an analysis of the data, finding that such a reversal was mathematically impossible. Since then, Hondurans have been protesting for 58 straight days despite consistent attacks from police and military including cases of live bullets that have left at least 20 protestors dead including 60-year-old Anselmo Villarreal.” …

The Inauguration of an Unelected President.

Adrienne Pine: Honduran Scholars Call on US to Cease Support for Military and Police

Resistance leader: US is behind the coup by Federico Fuentes

9 thoughts on “Jesse Freeston: The Never-Ending Coup in Honduras”