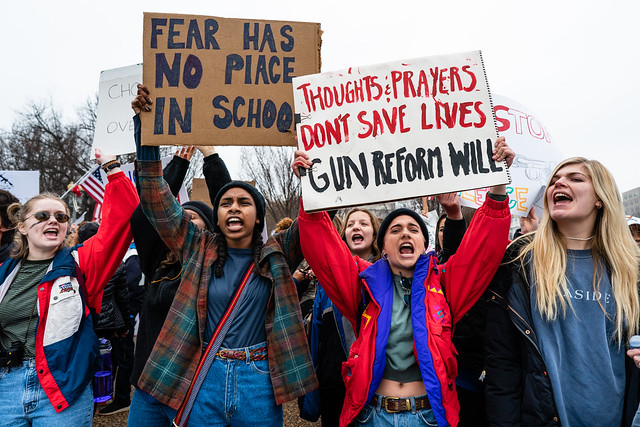 Part 1: Inside the U.S. Military Recruitment Program That Trained Nikolas Cruz to be “A Very Good Shot”

https://democracynow.org – Dozens of students who survived last week’s school shooting at Marjory Stoneman Douglas High School in Florida have arrived in Tallahassee to push for new gun control measures. On Tuesday, the Republican-controlled Florida House of Representatives blocked a bid to bring up a bill to ban sales of assault-style rifles in the state. The Florida gunman, a 19-year-old white former student named Nikolas Cruz, was a member of the Army Junior Reserve Officer Training Corps program before he was expelled from the school. Cruz was also part of a four-person JROTC marksmanship team at the school which had received $10,000 in funding from the NRA. For more, we speak with Pat Elder, director of the National Coalition to Protect Student Privacy, an organization that confronts militarism in schools. He’s the author of Military Recruiting in the United States.

Part 2: Florida Gunman Nikolas Cruz Knew How to Use a Gun, Thanks to the NRA and the U.S. Army

https://democracynow.org – Extended web-only discussion with Pat Elder, the director of the National Coalition to Protect Student Privacy, a group that confronts militarism in the schools. He is the author of Military Recruiting in the United States. The gunman who fired on students and teachers at Marjory Stoneman Douglas High School in Parkland, Florida, a 19-year-old white former student named Nikolas Cruz, was a member of the Army Junior Reserve Officer Training Corps program, known as JROTC. Cruz also took part in a four-person JROTC marksmanship team at the school which had received $10,000 in funding from the NRA. “[The NRA] realize that if they can start linking the children with the guns at age 13 in the high schools, it’s a win-win proposition for them and for the sellers of weaponry,” says Elder.

JROTC, Military Indoctrination and the Training of Mass Killers

Few in America have connected the dots between military indoctrination and firearms instruction on the one hand, and the propensity for training mass killers, whether their crimes are committed as enlisted soldiers in atrocities overseas or in American high schools.

Let’s examine the JROTC program and the militarization of Florida’s schools as a contributing factor to the Parkland massacre. When Cruz was apprehended he was wearing his JROTC polo shirt, sending a message to the world of his affiliation with the military program.

There are 1,600 American high schools that enroll students in military-run marksmanship programs, teaching children as young as 13 to shoot lethal weapons. It’s probably not the wisest public policy. The kids shoot .177 caliber lead pellets at 600 feet per second using CO2 propelled rifles. The Daisy Avanti 887, a cousin of Ralphie’s Red Ryder BB gun, is classified as a lethal weapon by the Army. Florida, along with a dozen other states, specifically prohibits carrying pellet guns into high schools, although the prohibition does not extend to the military. Pellet rifles are extremely dangerous and some are powerful enough to kill a boar.

It must be confusing to the 13-year-old mind. Broward County Schools has a strict anti-gun policy in place. The school system classifies pellet rifles as a “Class A” weapons, along with a variety of rifles, hand guns, and shotguns.

The use of lead projectiles in the nation’s high schools also threatens public health by spewing minute lead articulate matter into the air and on the floor at the muzzle end of the gun and at the target backstops. Children track the deadly particulates throughout the building. There is a linkage between firing pellet rifles indoors and elevated blood lead levels among participants.

JROTC programs in Florida and elsewhere were once plagued by low enrollment numbers which threatened to shut down the program. The military responded with a robust lobbying effort directed at states, aiming to allow students to satisfy normal, for-credit course requirements by taking the JROTC elective. Florida is most friendly to the military in this regard. The state allows students enrolled in JROTC to satisfy the curricular requirements of physical education, biology, physical science, art, and life management. JROTC is regarded as an Advanced Placement course. Students earn 6 Quality Points toward their weighted GPA.

Many of these courses are taught by retired enlisted soldiers with no teaching credentials and little or no college education. Meanwhile, Broward schools require teachers to hold teacher certification and most must have a Master’s degree after a certain period of time.

JROTC programs in US schools are run by the Army, Navy, Air Force, and Marines. The school shooting programs are regulated by the Civilian Marksmanship Program, (CMP). The program was set up by Congress after the Spanish-American War to ensure that large numbers of Americans knew how shoot guns in the event of a war. The CMP is now a private entity with $160 million in assets. It sells discarded military rifles, pistols, and ammunition to the American public at the behest of Congress. The CMP downplays the health and safety concerns of the robust shooting program.

Each branch has its own curriculum and textbooks that teach a dangerous and reactionary version of American history. The US bombed Hiroshima and Nagasaki to save a million American lives. The North Vietnamese fired on an innocent American warship in the Gulf of Tonkin. History is taught as a kind of American Fait Accompli. American exceptionalism and the use of force as an instrument of foreign policy are enshrined values, next to accepting one’s place in the chain of command. The civics textbook has a unit entitled, “You the People” rather than “We the People.” Schools exercise no curricular oversight. School districts across the country are allowing this intellectual straightjacket of a program to substitute for the arts. In addition, Broward’s schools host several dozen other military programs that work with the recruiting command to provide leads for recruiters. The military has also infiltrated the social media networks of high school children.

JROTC members frequently wear their uniforms to school and receive praise from their classmates, like the American reflex to support our troops. The Stoneman Douglas High School Marksmanship Program will be advancing to the Florida State championships this spring. Marksman 1st Lieutenant Diaz took first place in the standing rifle event during the last regional competition! It’s a big deal.

Children participate in shooting programs at tournaments hosted by the CMP and supported by the NRA.

The JROTC program is highly respected at Marjory Stoneman Douglas High School. All proceeds from the sale of the school’s branded products at the school’s “company store” help fund the JROTC battalion. Revenues from pizza sales also finance the JROTC program. The Stoneman High JROTC Military Ball will be held on April 21st this year at the Marriot Heron Bay. Nikolas Cruz won’t be there.

Pat Elder is the Director of the National Coalition to Protect Student Privacy, an organization that opposes military recruitment in the high schools, www.studentprivacy.org. Pat is the author of Military Recruiting in the United States.

Since 1999, 10,000 additional police officers have been placed at schools, with no impact on violence. Meanwhile, about one million students have been arrested for acts previously punishable by detention or suspension, and black students are three times more likely to be arrested than their white peers, says policy analyst Samuel Sinyangwe.

How to Counter Military Recruitment by Pat Elder (#NoWar2016)