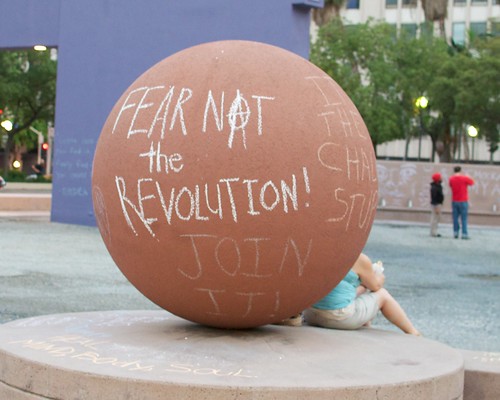 The Essays of The Man From the North by Rivera Sun
Writer, Dandelion Salad
March 9, 2018

There are some who mince their steps and words, who hush the bold and outspoken, who advise moderation. But, a revolution by any other name does not smell as sweet. Reform does not cut it. Resistance is not enough. Massive change is vague. Transformation calls to mind change, yet does not invoke the burning urgency, the gritty intensity of the tsunami of change we need. Evolution implies an unrealistic image of our corporate political pawns awakening, growing, evolving.

A revolution casts the corporate politicians out of power and replaces them. It is specific. It is accurate. It is the word we need.

To the credit of those who urge caution in our language, there are times when a metaphor, a code word, a subtle substitution is wise. But there are also times when horses and spades must be called by their true names. We must be brave enough to let the word we need cross our lips and be the word we mean.

Revolution. It is not a comfortable word. We must get used to it. The scope of change we need is not comfortable. So many of us cling to the familiar structures and systems, but these are the exact mechanisms of our suffering and our destruction. We need to be uncomfortable, thrown off balance, shoved out into unknown territory. For all that is known is corrupt, unjust, and dangerous. We must learn to dance in the upheaval of revolutionary times.

And, we must learn to live with revolutionaries, as much as with revolution. We have grown uneasy with such things. We are too accustomed to passivity, too accepting of abuse, too addicted to our minor comforts. We are afraid of the effort it takes to change. The dire necessity of crisis should inspire us to extraordinary greatness, yet we shrink like snails back into the shells of our individuated, permissible existences.

The revolutionary must be fearless enough to cry out that the emperor has no clothes. She must dare to live awake in the living nightmare of a crumbling and terrifying empire. He must be willing to speak honestly about the scope of the dangers. She must be visionary enough to propose solutions. They must be committed to the rigors and challenges of the journey toward change.

The revolutionary must dream outside the permitted corrals of the system. He must color outside the lines of societal definition. She must imagine the unimaginable. They must believe the impossible is, indeed, possible.

The revolutionary rejects stale myths and patriotic lies. Their loyalty is offered only to the long quest of humanity for dignity, respect, equality, justice, freedom, compassion, and peace. The revolution will wrench those values from the false platitudes of the powerful. She will rock the boat of the world, not the lulling cradle of the status quo. He will face the scorn of stability-loving opposition undaunted, for the revolutionary is ever tempest-tossed, laughing in the winds of the change.

The revolutionary grows lean with hunger for change, impassioned with yearning for a better world. They make the defenders of the status quo as frightened as chickens in a coop while the wolf song of revolution howls in the night.

Does this make you uneasy? Does the revolutionary spirit stir discomfort in your soul? Good. Complacency is a death sentence. We all know it. That which is comfortable to humanity today becomes the demise of our species as tomorrow dawns. Only the revolutionary spirit offers hope – and it is a hard hope, a bucket of cold water in the face of blind, drunken addiction to a destructive way of life.

These times of revolution and revolutionaries will not be comfortable. Get ready for them. They are here.

12 thoughts on “A Revolution By Any Other Name”