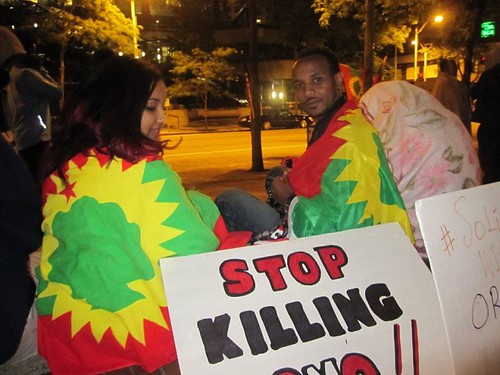 Tadesse is a 28-year-old Ethiopian from the capital, Addis Ababa. Like thousands of others he took part in demonstrations over the last three years, and together with family members, refused to pledge support for the Ethiopian government. Such displays of political dissent led to him being repeatedly imprisoned, tortured and cruelly mistreated. Now safe in Europe, he is in physical pain and psychological anguish as a result of the barbaric way he was treated in prison.

His experience is typical of contemporary Ethiopia where state violence and human rights abuses are commonplace. For the last 27 years the country has been ruled by the TPLF dominated EPRDF coalition; a totalitarian regime supported and lauded by the west – principally America, Britain and to a lesser degree the European Union – as a model for developing countries. The government has suppressed the people, reigned through fear and attempted to divide communities along ancient ethnic lines.

Despite attempts to control the population, since late 2015 a powerful protest movement has swept the country. Huge demonstrations have been taking place in Oromia and Amhara (the largest regions) and after years of despair many sense that fundamental change is now a real possibility. Unable to respond to this democratic explosion, on 15th February Prime Minister Hailemariam Desalegn (who many say is little more than a mouthpiece for the TPLF men in grey suits) announced his resignation. The following day, in a state of confusion and desperation, the regime imposed a six-month State of Emergency – the second such measure in the last two years.

The ruling party talks glibly of democracy and freedom, but there are scant signs of either in Ethiopia – no matter what ex-US Secretary of State Rex Tillerson may say. On a recent visit Tillerson made a deluded statement that has angered many Ethiopians. “I want to acknowledge this voluntary transfer of power. We [the US] think that’s a very powerful symbol to the strength of the democratic process here in Ethiopia, and we think it’s important that the parliament, which has been elected by the Ethiopian people, decide who the next leadership be. That’s the way democracies should perform.” Well ex-Secretary of State, Ethiopia is not a democracy and legitimate elections have never taken place.

The imposition of a SoE, which has been universally condemned, was essential according to Hirut Zemene, a senior Foreign Ministry official, to “install law and order […] and continue the wide ranging political and democratic reform the government has started to undertake.” In an address to the UN Human Rights Council in Geneva, she claimed that, “considerable changes have taken place in Ethiopia with regard to promotion and protection of human rights,” and that, “the demand for better governance, wider democratic space, and effective delivery of basic services has not fallen on deaf ears but prompted extensive reform measures to address them.” It is unclear what these reforms are, or why a state of emergency, the very antithesis of freedom and democracy, is necessary for their introduction.

Do these regime representatives actually believe their own rhetoric? Nothing supports her fantastical comments, while there is a great deal of evidence that the ruling party’s violent methodology remains intact: Arrests and killing of civilians, a hallmark of TPLF rule, continues unabated; in Moyale, an Ethiopian town straddling the border with Kenya, ESAT news reports that “Agazi security forces (made up of ethnic Tigrayans, same as the ruling TPLF) killed at least 13 people in Moyale town, in the restive Oromo region of Southern Ethiopia; at least 25 others were wounded according to a report by the Oromia Media Network (OMN).”

Thousands have fled Mayole and are now displaced in Kenya. Local sources inside Ethiopia estimate up to 30,000 have been driven from their homes, many of which have been burnt to the ground. In the rush to escape livestock was left behind, whilst some animals were shot and killed by security personnel. According to a press release from The Kenyan Red Cross, who are distributing food and “non-food items alongside the provision of integrated medical outreaches, health education, among other support,” the “number of displaced persons from Ethiopia has risen to 8,592. Reports indicate that the number may keep increasing in the coming days.” The majority are women and children. “These include pregnant and lactating mothers, chronically ill persons, those abled differently and the elderly.”

Those displaced tell of indiscriminate killings by TPLF security forces, these accounts published in Today ng:

“Mr Harsame Halakhe, a 68-year-old father of 19, said that when the soldiers raided their homes, they ordered them to lie down and shot some of them dead. Even places of worship, including mosques, became chambers of death. ‘People were killed in a mosque as we watched. We escaped death narrowly and fled with children and cattle,’ he said. Ms Kashure Guyo, 18, said soldiers attacked them on Saturday at Shawa-bare, a town three kilometres from the Kenya-Ethiopia border. She said the soldiers shot at anyone they came across. She was injured in the leg and hand as she fled. “They just came to the market and started shooting. We had to flee for our lives with bullets flying all over.”

The ruling party issued a statement saying the civilian deaths in Moyale were an accident – the result of ‘wrong intelligence’. Apparently the security forces were meant to be killing members of the Oromo Liberation Front (OLF), an opposition group branded terrorists by the TPLF, although the label has little meaning in Ethiopia, where it is applied to everyone and anyone who dissents or demands the observation of human rights.

This appalling incident is but the latest of such acts of state aggression. On 5th March three people were killed and two days earlier security forces killed “at least six” people. “Residents of Ambo, Metu and Guder, who spoke to ESAT say armed soldiers of Agazi were going door to door. They shot and killed those who refused orders, according to residents of the towns.” It’s hard to see how this and similar acts constitutes the ‘promotion and protection of human rights and good governance,’ which the government says it is working towards. Such words are simply propaganda churned out for the international audience; the majority of Ethiopians don’t believe a word the government utters.

The TPLF is in chaos; they have no idea how to respond to the popular movement that has engulfed the country and the legitimate demands of protestors and opposition groups. A new Prime Minister and spurious reforms will not silence the cries for change. The SoE is another antagonistic mistake: it should be lifted immediately, all political prisoners released and early general elections announced – a year hence would be reasonable, thus enabling all political parties to prepare properly. Simultaneously, greater unity is needed amongst the many opposition movements: ethnic/tribal concerns, affiliations and historic grievances need to be laid aside in favour of a unified vision of the country, one that celebrates cultural diversity but works to establish lasting unity. Such an approach would enrich the lives of all Ethiopians and create true stability in the country and the wider region. Unity is the way forward for Ethiopia and indeed the world – the greatest degree of unity with the broadest level of diversity.

Their Tyranny is Coming to an End by Graham Peebles

The People are Continuing to Demand Freedom, Justice and Democracy by Graham Peebles