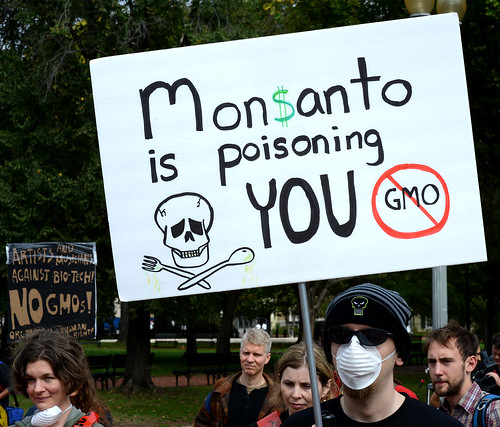 Bayer and Monsanto have a long history of collusion to poison the ecosystem for profit. The Trump administration should veto their merger not just to protect competitors but to ensure human and planetary survival.

Two new studies from Europe have found that the number of farm birds in France has crashed by a third in just 15 years, with some species being almost eradicated. The collapse in the bird population mirrors the discovery last October that over three quarters of all flying insects in Germany have vanished in just three decades. Insects are the staple food source of birds, the pollinators of fruits, and the aerators of the soil.

The chief suspect in this mass extinction is the aggressive use of neonicotinoid pesticides, particularly imidacloprid and clothianidin, both made by German-based chemical giant Bayer. These pesticides, along with toxic glyphosate herbicides (Roundup), have delivered a one-two punch against Monarch butterflies, honeybees and birds. But rather than banning these toxic chemicals, on March 21st the EU approved the $66 billion merger of Bayer and Monsanto, the US agribusiness giant producing Roundup and the genetically modified (GMO) seeds that have reduced seed diversity globally. The merger will make the Bayer-Monsanto conglomerate the largest seed and pesticide company in the world, giving it enormous power to control farm practices, putting private profits over the public interest.

As Sen. Elizabeth Warren (D.-Mass.) noted in a speech in December before the Open Markets Institute, massive companies are merging into huge market-dominating entities that invest a share of their profits in lobbying and financing political campaigns, shaping the political system to their own ends. She called on the Trump administration to veto the Bayer-Monsanto merger, which is still under antitrust scrutiny and has yet to be approved in the US.

A 2016 survey of Trump’s voter base found that over half disapproved of the Monsanto/Bayer merger, fearing it would result in higher food prices and higher costs for farmers. Before 1990, there were 600 or more small independent seed businesses globally, many of them family owned. By 2009, only about 100 survived; and seed prices had more than doubled. But reining in these powerful conglomerates is more than just a question of economics. It may be a question of the survival of life on this planet.

While Bayer’s neonicotinoid pesticides wipe out insects and birds, Monsanto’s glyphosate has been linked to over 40 human diseases, including cancer. Its GMO seeds have been genetically modified to survive this toxic herbicide, but the plants absorb it into their tissues; and in the humans who eat them, glyphosate disrupts the endocrine system and the balance of gut bacteria, damages DNA and is a driver of cancerous mutations. Researchers summarizing a 2014 study of glyphosates in the Journal of Organic Systems linked them to the huge increase in chronic diseases in the United States, with the percentage of GMO corn and soy planted in the US showed highly significant correlations with hypertension, stroke, diabetes, obesity, lipoprotein metabolism disorder, Alzheimer’s, Parkinson’s, multiple sclerosis, hepatitis C, end stage renal disease, acute kidney failure, cancers of the thyroid, liver, bladder, pancreas, kidney and myeloid leukaemia. But regulators have turned a blind eye, captured by corporate lobbyists and a political agenda that has more to do with power and control them protecting the health of the people.

The Trump administration has already approved a merger between former rivals Dow and DuPont, and has signed off on the takeover of Swiss pesticide giant Syngenta by ChemChina. If Monsanto/Bayer gets approved as well, just three corporations will dominate the majority of the world’s seed and pesticide markets, giving them enormous power to continue poisoning the planet at the expense of its living inhabitants.

The Shady History of Bayer and the Petrochemical Cartel

To understand the magnitude of this threat, it is necessary to delve into some history. This is not the first time Monsanto and Bayer have joined forces. In both world wars, they made explosives and poisonous gases using shared technologies that they sold to both sides. After World War II, they united as MOBAY (MonsantoBayer) and supplied the ingredients for Agent Orange in the Vietnam War.

In fact corporate mergers and cartels have played a central role in Bayer’s history. In 1904, it joined with German giants BASF and AGFA to form the first chemical cartel. After World War I, Germany’s entire chemical industry was merged to become I.G. Farben. By the beginning of World War II, I.G. Farben was the largest industrial corporation in Europe, the largest chemical company in the world, and part of the most gigantic and powerful cartel in all history.

A cartel is a grouping of companies bound by agreements designed to restrict competition and keep prices high. The dark history of the I.G. Farben cartel was detailed in a 1974 book titled World Without Cancer by G. Edward Griffin, who also wrote the best-selling Creature from Jekyll Island on the shady history of the Federal Reserve. Griffin quoted from a book titled Treason’s Peace by Howard Ambruster, an American chemical engineer who had studied the close relations between the German chemical trust and certain American corporations. Ambruster warned:

“Farben is no mere industrial enterprise conducted by Germans for the extraction of profits at home and abroad. Rather, it is and must be recognized as a cabalistic organization which, through foreign subsidiaries and secret tie-ups, operates a far-flung and highly efficient espionage machine — the ultimate purpose being world conquest … and a world superstate directed by Farben.”109

The I.G. Farben cartel arose out of the international oil industry. Coal tar or crude oil is the source material for most commercial chemical products, including those used in drugs and explosives. I.G. Farben established cartel agreements with hundreds of American companies. They had little choice but to capitulate after the Rockefeller empire, represented by Standard Oil of New Jersey, had done so, since they could not hope to compete with the Rockefeller/I.G. combination.

The Rockefeller group’s greatest influence was exerted through international finance and investment banking, putting them in control of a wide spectrum of industry. Their influence was particularly heavy in pharmaceuticals. The directors of the American I.G. Chemical Company included Paul M. Warburg, brother of a director of the parent company in Germany and a chief architect of the Federal Reserve System.

The I.G. Farben cartel was technically disbanded at the Nuremberg War Trials following World War II, but in fact it merely split into three new companies — Bayer, Hoescht and BASF — which remain pharmaceutical giants today. In order to conceal its checkered history, Bayer orchestrated a merger with Monsanto in 1954, giving rise to the MOBAY Corporation. In 1964, the US Justice Department filed an antitrust lawsuit against MOBAY and insisted that it be broken up, but the companies continued to work together unofficially.

In Seeds of Destruction: The Hidden Agenda of Genetic Manipulation (2007), William Engdahl states that global food control and depopulation became US strategic policy under Rockefeller protégé Henry Kissinger, who was Secretary of State in the 1970s. Along with oil geopolitics, these policies were to be the new “solution” to the threats to US global power and continued US access to cheap raw materials from the developing world. “Control oil and you control nations,” Kissinger notoriously declared. “Control food and you control the people.”

Global food control has nearly been achieved, by reducing seed diversity and establishing proprietary control with GMO seeds distributed by only a few transnational corporations led by Monsanto; and by a massive taxpayer-subsidized propaganda campaign in support of GMO seeds and neurotoxic pesticides. A de facto cartel of giant chemical, drug, oil, banking and insurance companies connected by interlocking directorates reaps the profits at both ends, by waging a very lucrative pharmaceutical assault on the diseases created by their toxic agricultural chemicals.

In the end, the Green Revolution engineered by Henry Kissinger to control markets and ensure US economic dominance may be our nemesis. While the US struggles to maintain its hegemony by economic coercion and military force, Russia is winning the battle for the health of the people and the environment. Vladimir Putin has banned GMOs and has set out to make Russia the world’s leading supplier of organic food.

Russian families are showing what can be done with permaculture methods on simple garden plots. In 2011, 40% of Russia’s food was grown on dachas (cottage gardens or allotments), predominantly organically. Dacha gardens produced over 80% of the country’s fruit and berries, over 66% of the vegetables, almost 80% of the potatoes and nearly 50% of the nation’s milk, much of it consumed raw. Russian author Vladimir Megre comments:

“Essentially, what Russian gardeners do is demonstrate that gardeners can feed the world – and you do not need any GMOs, industrial farms, or any other technological gimmicks to guarantee everybody’s got enough food to eat. Bear in mind that Russia only has 110 days of growing season per year – so in the US, for example, gardeners’ output could be substantially greater. Today, however, the area taken up by lawns in the US is two times greater than that of Russia’s gardens – and it produces nothing but a multi-billion-dollar lawn care industry.”

In the US, only about 0.6 percent of the total agricultural area is devoted to organic farming. Most farmland is soaked in pesticides and herbicides. But the need for these toxic chemicals is a myth. In an October 2017 article in The Guardian, columnist George Monbiot cited studies showing that reducing the use of neonicotinoid pesticides actually increases production, because the pesticides harm or kill the pollinators on which crops depend. Rather than an international trade agreement that would enable giant transnational corporations to dictate to governments, he argues that we need a global treaty to regulate pesticides and require environmental impact assessments for farming. He writes:

“Farmers and governments have been comprehensively conned by the global pesticide industry. It has ensured its products should not be properly regulated or even, in real-world conditions, properly assessed…. The profits of these companies depend on ecocide. Do we allow them to hold the world to ransom, or do we acknowledge that the survival of the living world is more important than returns to their shareholders?”

President Trump has boasted of winning awards for environmental protection. If he is serious about protecting the environment, he needs to block the merger of Bayer and Monsanto, two agribusiness giants bent on destroying the ecosystem for private profit.

The War on Weed Part II: Monsanto, Bayer, and the Push for Corporate Cannabis by Ellen Brown

The War on Weed Is Winding Down – But Will Monsanto Be the Winner? by Ellen Brown

Monsanto and its Promoters vs. Freedom of Information by Ralph Nader