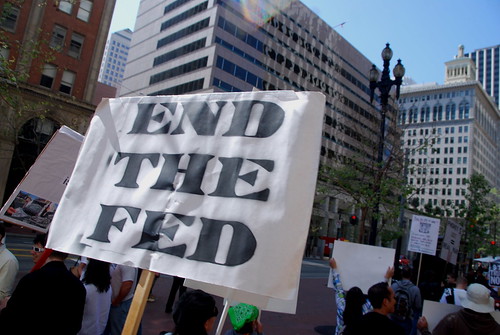 The Fed is aggressively raising interest rates, although inflation is contained, private debt is already at 150% of GDP, and rising variable rates could push borrowers into insolvency. So what is driving the Fed’s push to “tighten”?

On March 31st the Federal Reserve raised its benchmark interest rate for the sixth time in 3 years and signaled its intention to raise rates twice more in 2018, aiming for a fed funds target of 3.5% by 2020. LIBOR (the London Interbank Offered Rate) has risen even faster than the fed funds rate, up to 2.3% from just 0.3% 2-1/2 years ago. LIBOR is set in London by private agreement of the biggest banks, and the interest on $3.5 trillion globally is linked to it, including $1.2 trillion in consumer mortgages.

Alarmed commentators warn that global debt levels have reached $233 trillion, more than three times global GDP; and that much of that debt is at variable rates pegged either to the Fed’s interbank lending rate or to LIBOR. Raising rates further could push governments, businesses and homeowners over the edge. In its Global Financial Stability report in April 2017, the International Monetary Fund warned that projected interest rises could throw 22% of US corporations into default.

Then there is the US federal debt, which has more than doubled since the 2008 financial crisis, shooting up from $9.4 trillion in mid-2008 to over $21 trillion in April 2018. Adding to that debt burden, the Fed has announced that it will be dumping its government bonds acquired through quantitative easing at the rate of $600 billion annually. It will sell $2.7 trillion in federal securities at the rate of $50 billion monthly beginning in October. Along with a government budget deficit of $1.2 trillion, that’s nearly $2 trillion in new government debt that will need financing annually.

If the Fed follows through with its plans, projections are that by 2027, US taxpayers will owe $1 trillion annually just in interest on the federal debt. That is enough to fund President Trump’s original trillion dollar infrastructure plan every year. And it is a direct transfer of wealth from the middle class to the wealthy investors holding most of the bonds. Where will this money come from? Even crippling taxes, wholesale privatization of public assets, and elimination of social services will not cover the bill.

With so much at stake, why is the Fed increasing interest rates and adding to government debt levels? Its proffered justifications don’t pass the smell test.

In setting interest rates, the Fed relies on a policy tool called the “Phillips curve,” which allegedly shows that as the economy nears full employment, prices rise. The presumption is that workers with good job prospects will demand higher wages, driving prices up. But the Phillips curve has proven virtually useless in predicting inflation, according to the Fed’s own data. Former Fed Chairman Janet Yellen has admitted that the data fails to support the thesis, and so has Fed Governor Lael Brainard. Minneapolis Fed President Neel Kashkari calls the continued reliance on the Phillips curve “faith-based” monetary policy. But the Federal Open Market Committee (FOMC), which sets monetary policy, is undeterred.

“Full employment” is considered to be 4.7% unemployment. When unemployment drops below that, alarm bells sound and the Fed marches into action. The official unemployment figure ignores the great mass of discouraged unemployed who are no longer looking for work, and it includes people working part-time or well below capacity. But the Fed follows models and numbers, and as of April 2018, the official unemployment rate had dropped to 4.3%. Based on its Phillips curve projections, the FOMC is therefore taking steps to aggressively tighten the money supply.

The notion that shrinking the money supply will prevent inflation is based on another controversial model, the monetarist dictum that “inflation is always and everywhere a monetary phenomenon”: inflation is always caused by “too much money chasing too few goods.” That can happen, and it is called “demand-pull” inflation. But much more common historically is “cost-push” inflation: prices go up because producers’ costs go up. And a major producer cost is the cost of borrowing money. Merchants and manufacturers must borrow in order to pay wages before their products are sold, to build factories, buy equipment and expand. Rather than lowering price inflation, the predictable result of increased interest rates will be to drive consumer prices up, slowing markets and increasing unemployment – another Great Recession. Increasing interest rates is supposed to cool an “overheated” economy by slowing loan growth, but lending is not growing today. Economist Steve Keen has shown that at about 150% private debt to GDP, countries and their populations do not take on more debt. Rather, they pay down their debts, contracting the money supply; and that is where we are now.

The Fed’s reliance on the Phillips curve does not withstand scrutiny. But rather than abandoning the model, the Fed cites “transitory factors” to explain away inconsistencies in the data. In a December 2017 article in The Hill, Tate Lacey observed that the Fed has been using this excuse ever since 2012, citing one “transitory factor” after another, from temporary movements in oil prices, to declining import prices and dollar strength, to falling energy prices, to changes in wireless plans and prescription drugs. The excuse is wearing thin.

The Fed also claims that the effects of its monetary policies lag behind the reported data, making the current rate hikes necessary to prevent problems in the future. But as Lacey observes, GDP is not a lagging indicator, and it shows that the Fed’s policy is failing. Over the last two years, leading up to and continuing through the Fed’s tightening cycle, nominal GDP growth averaged just over 3%; while in the two prior years, nominal GDP grew at more than 4%. Thus “the most reliable indicator of the stance of monetary policy, nominal GDP, is already showing the contractionary impact of the Fed’s policy decisions,” says Lacey, “signaling that its plan will result in further monetary tightening, or worse, even recession.”

If the Phillips curve, the inflation rate and loan growth don’t explain the push for higher interest rates, what does? The answer was suggested in an April 12th Bloomberg article by Yalman Onaran, titled “Surging LIBOR, Once a Red Flag, Is Now a Cash Machine for Banks.” He wrote:

“The largest U.S. lenders could each make at least $1 billion in additional pretax profit in 2018 from a jump in the London interbank offered rate for dollars, based on data disclosed by the companies. That’s because customers who take out loans are forced to pay more as Libor rises while the banks’ own cost of credit has mostly held steady.”

During the 2008 crisis, high LIBOR rates meant capital markets were frozen, since the banks’ borrowing rates were too high for them to turn a profit. But US banks are not dependent on the short-term overseas markets the way they were a decade ago. They are funding much of their operations through deposits, and the average rate paid by the largest US banks on their deposits climbed only about 0.1% last year, despite a 0.75% rise in the fed funds rate. Most banks don’t reveal how much of their lending is at variable rates or is indexed to LIBOR, but Oneran comments:

“JPMorgan Chase & Co., the biggest U.S. bank, said in its 2017 annual report that $122 billion of wholesale loans were at variable rates. Assuming those were all indexed to Libor, the 1.19 percentage-point increase in the rate in the past year would mean $1.45 billion in additional income.”

Raising the fed funds rate can be the same sort of cash cow for US banks. According to a December 2016 Wall Street Journal article titled “Banks’ Interest-Rate Dreams Coming True”:

“While struggling with ultralow interest rates, major banks have also been publishing regular updates on how well they would do if interest rates suddenly surged upward. . . . Bank of America . . . says a 1-percentage-point rise in short-term rates would add $3.29 billion. . . . [A] back-of-the-envelope calculation suggests an incremental $2.9 billion of extra pretax income in 2017, or 11.5% of the bank’s expected 2016 pretax profit … .”

As observed in an April 12 article on Seeking Alpha:

“About half of mortgages are … adjusting rate mortgages [ARMs] with trigger points that allow for automatic rate increases, often at much more than the official rate rise… .

“One can see why the financial sector is keen for rate rises as they have mined the economy with exploding rate loans and need the consumer to get caught in the minefield.

“Even a modest rise in interest rates will send large flows of money to the banking sector. This will be cost-push inflationary as finance is a part of almost everything we do, and the cost of business and living will rise because of it for no gain.”

Cost-push inflation will drive up the Consumer Price Index, ostensibly justifying further increases in the interest rate, in a self-fulfilling prophecy in which the FOMC will say, “We tried – we just couldn’t keep up with the CPI.”

A Closer Look at the FOMC

The FOMC is composed of the Federal Reserve’s seven-member Board of Governors, the president of the New York Fed, and four presidents from the other 11 Federal Reserve Banks on a rotating basis. All 12 Federal Reserve Banks are corporations, the stock of which is 100% owned by the banks in their districts; and New York is the district of Wall Street. The Board of Governors currently has four vacancies, leaving the member banks in majority control of the FOMC. Wall Street calls the shots; and Wall Street stands to make a bundle off rising interest rates.

The Federal Reserve calls itself “independent,” but it is independent only of government. It marches to the drums of the banks that are its private owners. To prevent another Great Recession or Great Depression, Congress needs to amend the Federal Reserve Act, nationalize the Fed, and turn it into a public utility, one that is responsive to the needs of the public and the economy.

The Global Banking Game Is Rigged, and the FDIC Is Suing by Ellen Brown

3 thoughts on “Why Interest Rates Are Rising by Ellen Brown”