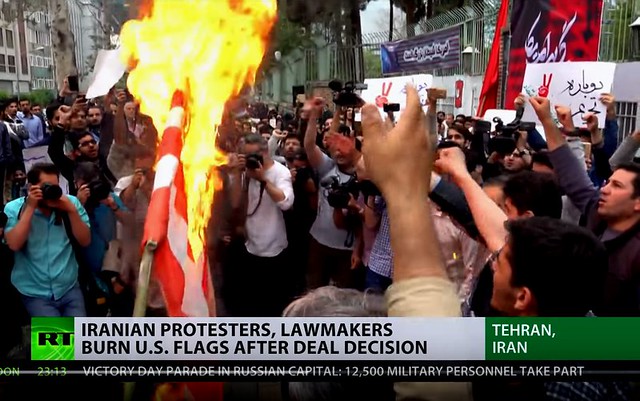 Global impact of US withdrawal from Iran deal

President Donald Trump’s decision to withdraw the United States from the JCPOA, known as the Iran nuclear deal, is having ripple effects that are already being felt around the world. Israel began bombing a military base south of Damascus, reportedly killing eight Iranians. US allies have released a joint statement making their commitment to the JCPOA clear. RT America’s Anya Parampil reports.

America’s out: World reacts to Trump’s decision to withdraw from Iran deal

Donald Trump’s decision to withdraw from the Iran nuclear deal has sparked a wave of protests in Tehran. Israeli PM has praised the U.S. president’s decision while EU, Turkey & China believe the decision could trigger further instability. Read latest on Iran deal: https://on.rt.com/94×9

With the Iran nuclear deal on life support after Trump’s withdrawal, Israel has launched extensive strikes against Iranian positions in Syria. Trita Parsi of the National Iranian American Council discusses the escalating crisis.

Don’t Do It by Ralph Nader

9 thoughts on “Chris Hedges: Many Unintended Consequences of the US Backing Out of the Iran Nuclear Deal + Global Impact of US Withdrawal + Israel Hits Iran in Syria”