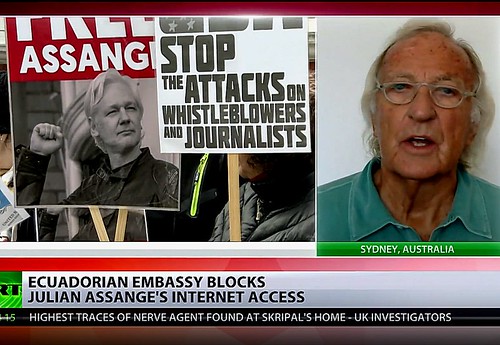 Sputnik: Ecuador’s foreign minister has said that the country is in talks with Britain about Assange’s fate. What can you tell us about this?

John Pilger: I can say that the new government in Ecuador led by Lenin Moreno is a disgrace. They have defamed the good name of Ecuador which under the previous president, [Rafael] Correa, had elevated itself to an extraordinarily moral position in granting Julian Assange political refuge.

Politically refuge is something that is internationally recognized. It’s not something you can then water down. Well that’s what Moreno’s government has done. He’s negotiated with the British government over the head of Julian, at times not even involving him and his lawyers.

It’s quite clear that this government has deferred to the United States, because it cut off Julian’s contacts – all internet, all phone, all visitors apart from food and lawyers on the day that US SouthCom deputy commander general Joseph DiSalvo arrived in Quito, Ecuador to renegotiate a US base that Correa had shut down. [This is] too much of a coincidence.

Julian Assange’s Asylum in Ecuador’s Embassy is ‘Under Threat’

Guillaume Long, Ecuador’s foreign minister under former President Rafael Correa, comments on the recent revelations in The Guardian that Ecuador spent millions of dollars on Assange’s security, on his current total isolation, and on the current government’s apparent lack of interest in guaranteeing Assange’s political asylum.

Chris Hedges: Latin America Under Assault From International Bankers, Corporations and the CIA (with Guillaume Long)

“The Senate voted to save net neutrality. Now we need the House of Representatives to do the same, or else the FCC will let ISPs like Comcast and Verizon ruin the internet with throttling, censorship and unnecessary fees.”

Click the link below to write to and/or call Congress.