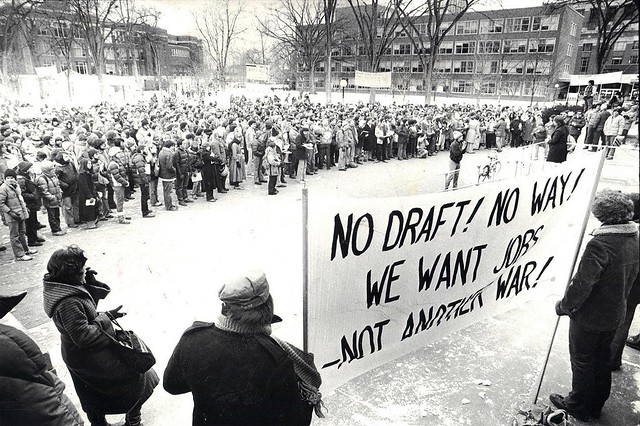 But now, the Senate has passed a $602 billion defense bill that includes an amendment for drafting women. If this bill were in effect today, I would be fined a quarter of a million dollars and face five years in prison for writing these words:

Women: do not register for the draft.

According to the new bill, saying this and telling other women not to register for the draft is against the law, but I’ll say these words as long as I live in every way I can … and I’ll tell it to men, too. For too long, this nation has sat idle as horrific wars are waged in our names. Now, a Congress of the same predominantly rich, white, old men who send our brothers off to war would like the women of this country to pick up the weapons in our very own hands.

More than refuse, I will organize, not just to stop the Women’s Draft, but to abolish war in its entirety. Did Congress think that “women’s equality” meant sending us off to war? Women’s equality is peace, democracy, economic justice, racial justice, environmental sustainability, restorative justice, ending mass incarceration, providing for all children of this country, caring for our elders, affordable healthcare and housing, and debt-free student education.

Women’s equality does not – and never will – include forcing us to kill our fellow human beings in order to protect the patriarchal, oligarchic, racist, imperialistic interests of the greedy, war-profiteering few.

There is something ludicrous about the very notion of drafting me into the military. I imagine what Helen Keller (a notorious anti-war activist) might have told me: sit-down, strike, and refuse to die in the rich men’s wars. Kathy Kelly and Medea Benjamin might smile on my first day of boot camp as I engage in total noncooperation with the training and speak to my fellow women about the injustice and horror of war. What will the officers do then? Throw me in prison, where, like peace activists and all organizers, I might organize work strikes and refuse to build the infrastructure of war? Would they put me in solitary confinement like Chelsea Manning for speaking truth to power? Would they torture me as they do to the illegally and unfairly held men at Guantanamo? Would they rape me like they already do to one third of my sisters in the military?

Undoubtedly, our congresspersons were not thinking of me when they introduced the women’s draft bill. Perhaps they were thinking of my blonde cousins – some of who are military wives – marching teary-eyed as they go off to kill children that do not look so different than the ones they leave behind. Perhaps they imagined black and brown bodies dying to protect a racist nation that incarcerates, murders, and impoverishes them. Perhaps they imagined my veteran friends, and thought that women, too, should join the ranks of those haunted by the horrors of war, suffering from PTSD. Perhaps they thought of us smiling and waving as we’re trotted out for Memorial Day parades and shows of patriotism.

Certainly, they did not have Rivera Sun in mind, a five-foot-five, redheaded, nonviolent strategist with a pen sharper than a hellfire missile. If so, they would have quietly killed the women’s draft bill … because there is only one place the US military is drafting Rivera Sun – and that’s straight into the peace movement.

Women: do not register for the draft. Let us do what we should have done long ago. For too long, we have been complacent as our sons, brothers, husbands, and fathers were sent off to war. No more. The sleeping giant of American womenkind has awakened … and she wants the total Abolition of War.

Republished with permission from Peace Voice

The feds initially provided only a few days for the public to submit comments regarding the future of the draft in the United States. This mirrored their process of announcing public hearings with only a few days notice. Due to pressure, they have extended the deadline for your online comments until September.

They need to hear from us!

As we have been reporting to you, a federal commission has been formed to address the future of draft registration in the United States and whether the draft should end or be extended.

The press release states “The Commission wants to learn why people serve and why people don’t; the barriers to participation; whether modifications to the selective service system are needed; ways to increase the number of Americans in service; and more.”

Public hearings are currently scheduled for the following cities. We encourage folks to attend these hearings by checking the commission’s website for the actual dates and locations of these hearings (usually announced only days before).

For more background information, read our recent post “Why is the government soliciting feedback on the draft now?”

And if you haven’t yet, check out our podcast on this issue …

Courage to Resist Podcast: The Future of Draft Registration in the United States

We had draft registration resister Edward Hasbrouck on the Courage to Resist podcast this week to explain what’s going on. Edward talks about his own history of going to prison for refusing to register for the draft in 1983, the background on this new federal commission, and addresses liberal arguments in favor of involuntary service. Edward explains:

What’s happening right now is that a National Commission … has been appointed to study the question of whether draft registration should be continued, whether it should be expanded to make women, as well as men register for the draft, whether a draft itself should be started, whether there should be some other kind of Compulsory National Service enacted.

The Pentagon would say, and it’s true, they don’t want a draft. It’s not plan A, but it’s always been plan B, and it’s always been the assumption that if we can’t get enough volunteers, if we get in over our head, if we pick a larger fight than we can pursue, we always have that option in our back pocket that, “If not enough people volunteer, we’re just going to go go to the draft, go to the benches, and dragoon enough people to fight these wars.”

All material created by Courage to Resist, and shared publicly via our website, is made available under the following Creative Commons license: Attribution-NonCommercial 4.0 International (CC BY-NC 4.0)

16 thoughts on “Women’s Draft? Sign Me Up To Abolish War by Rivera Sun + Feds Extend Deadline for Public Comments on Future Draft”