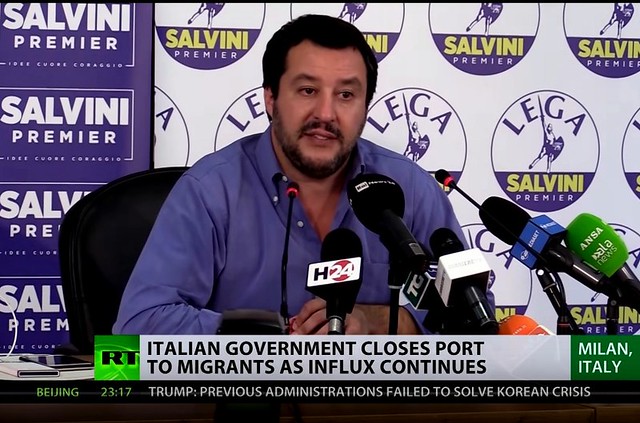 The new man is 45-year old Matteo Salvini, Secretary-leader of the Lega (formerly the Lega Nord). In the new Rome government, Salvini appears as co-Vice Premier and simultaneously Minister of the Interior, the most powerful ministry in Italy’s political system. Since Salvini is largely unknown outside Italy, many observers are asking Who is Matteo Salvini? To answer that the observer must pass through a veritable labyrinth of personalities, political parties, sudden changes of direction and ideology and history to grasp even a few of the subtleties and fine points of Italian politics that not even all Italian want to grasp.

And here, in order to get a handle on Matteo Salvini and the history taking place today in Italy, in Europe, the observer must first step back and consider the context in which political events are unraveling, not only in Italy, but in all of Europe and much of the world. Non-Europeans are familiar with the Catalan bid for autonomy from Madrid; readers will also recall the bloody fight of the Basques for the same, the same battle which over a half century ago shook Belgium as Flemish people fought for independence from Francophone Belgium. The Lega Nord was founded on a similar political demand: secession from Italy and Rome.

In the beginning there were three men plus one. There was Umberto Bossi (b. Lombardy Region, 1941) who founded the Lega Lombarda in 1984, then united the various Leagues in the North in the Lega Nord, the Northern League, in 1989. There was Roberto Marone, born in Varese, who was always Bossi’s second, except for a year, 2012-2013 when he became Secretary after Bossi resigned following a judicial inquest concerning Bossi and his family suspected of corruption. As the Lega Nord entered national politics also Marone was Minister of the Interior. There was the kid, Matteo Salvini, (b. March 9, 1973 in Milano), who joined the Lega Nord in 1990 at age 17. And later there was the intruder, the popular Flavio Tosi, mayor of Verona and one of the chiefs of the Lega in Veneto, expelled by Salvini for insubordination to the Lega’s changing political lines.

Umberto Bossi’s political line was flexible, more pragmatic than strategic, vacillating between federalism and secessionism of the area referred to as Padania, the swath of flat lands south of the Alps chiefly in Lombardy. Bossi’s Lega Nord entered and exited a coalition with Silvio Berlusconi’s Forza Italia, according to circumstances, sometimes it seemed on whim. He did a brilliant balancing act between maintaining the northern image and coalition with Berlusconi on a national level. And he was the undisputed leader from 1989-2012. Italian analysts had never agreed on the ideological nature of the Lega Nord during Bossi’s reign—left or right? The major communist leader, Massimo D’Alema, once labeled the Lega Nord a party of the left: “It is our rib.” In any case Bossi aimed at separation of northern Padania and recognition of a Republic of the North, a line which in the 1996 elections garnered 10% of the national vote for the Lega Nord which got 59 seats in the Chamber of Deputies and 27 senators in Rome. Bossi used a crude, populist language and folksy ways, with an abundance of symbols and rituals and mystery (like Nazis), he loved secret meetings of the “magic circle” of the first party founders in the hinterlands of Milano and Bergamo and the great assembly of the Lega people at Pontida in the countryside near Bergamo. Yet when I and five other journalists interviewed him in his headquarters in Milano he was extremely knowledgeable and well-spoken, answering all our questions spontaneously and elaborating on both national and international politics with ease and fluency.

Matteo steps out of the labyrinth

Umberto Bossi liked his nickname, “Senatur”, as he was called in dialect following his election to the Italian Senate. When in 2012 Bossi resigned as Lega Nord Secretary, his backup Roberto Marone took over the party leadership until in 20 13 Matteo Salvini who had been long devoted to Bossi was elected as the real successor. At that point the story of the Salvini we see today on center stage today begins. He is seasoned and ready for war, fire and thunder for all. For Italy, for the European Union, for the world. He thinks bigger than most of us once believed he did, that roughneck kid from Milano. Now Matteo had been very very busy during the time since the ragazzo joined the Northern League in 1990 … building, building, building. First, building his future and gaining political experience in Milano youth movements, then in the city administration, then in the Chamber of Deputies in Rome, then in the European Parliament in Strasbourg. He didn’t just materialize out of nowhere. He was in the labyrinth too but he was building the foundations, the fruits of which work are visible today. The kid had finished the good Milano Liceo, Alessandro Manzoni, and studied political science at Milano University but dropped out five exams away from a degree. No matter. A diploma had little to do with his goals. When the time arrived he was ready … at 40 years of age. He was pragmatic from the start. Despite his former devotion to Bossi, he set aside the ex-leader like a keepsake as the formal, ceremonious and powerless League President and a comfortable seat as a Senator in the Rome Parliament, renewed in 2018 elections despite his speech and physical handicap since a stroke in 2013 and his advancing age. Marone was simply ignored, while Tosi, the Venetan, still popular in Verona but out of the running in Milano, was expelled, out of grace with Salvini.

Then a stroke of genius. The Lega Nord had to expand to fit into Matteo’s plans. Go south, young man, go south. In 2014 he organized the Noi Con Salvini (We with Salvini) movement especially for the Mezzogiono, Italy’s truly neglected South governed by crime and corruption. In effect, Salvini made the Lega Nord a real national party. He and his new party had no time for silly rituals in the northern hinterland, for secret dinners and the “magic circle”. The word “Nord” no longer made sense. It was to be ultimately dropped from the party name, now known as La Lega, The League.

Since 2014 Salvini has expanded his party not only geographically but ideologically he has moved further and further to the Right, establishing close relations with the extreme right Front National of Marine Le Pen in France and the group of Gaert Wilders in The Netherlands. In 2015 he took another step toward national power when he confirmed the dramatic change in his political orientation: he became a populist Rightist just when it was gaining popularity in much of Europe. He organized in Rome a demonstration against the governing Democratic Party (PD) and its strong leader Matteo Renzi. (Maybe there’s something about the name Matteo that strikes voters’ fancy!) More important than the demonstration itself was the identity of his partners. This time he acted together with pure Fascists with whom by the looks of things he enjoys a good rapport: Fratelli d’Italia, a pure Fascist party (5% vote in 2018 elections) and the hardline Fascist movement Casa Pound. Named for infamous Ezra Pound, the American poet who became a propagandist for Mussolini’s Fascism during World War 2, the movement is led and staffed by vicious hoodlums and street fighters, something like the SA (Sturmabteilung) or Brown Shirts in Nazi Germany, a paramilitary organization similar to Mussolini’s Black Shirts in Italy. I have met and talked long with some of their leaders. At the same time Salvini only pays lip service to what Bossi and the magic circle considered the cardinal long-term objective of La Lega: the independence of that rich Padania area. I don’t believe he really cares about that minor goal any longer. He is not another Bossi. Such limits are not for a strongman like Matteo Salvini. He wants much much more. On the other hand, it seems he is either ideologically confused or truly believes there is no difference between ideologies: Left or Right is only a name. He once said that he saw more of the Left’s values in the Right, that the Right did more for workers and just causes than the Left, and he supports dialogue with those who oppose an erroneous official Europe as in the EU. On the one hand he has claimed he feels Leftist. On the other hand, Salvini is well-known for his racism and racist outbursts,, especially regarding black refugees. He opposes gay marriage and gay adoptions.

Thus, the observer must look far beyond the labyrinth Umberto Bossi created to grasp the significance of what is happening in Italy today. Salvini himself and his Lega are “in progress”, ongoing and evolving affairs which only a fool would attempt to label. Two things are certain however: Matteo Salvini, a man who recognizes no limits will not burn out easily; he is made of tougher fiber than was Matteo Renzi. Secondly, his Lega in progress belongs to times when similar movements and parties are exploding throughout the world. Unfortunately.

Gaither Stewart is a Writer on Dandelion Salad and Senior Editor and Rome-based European correspondent of The Greanville Post. A veteran journalist and essayist on a broad palette of topics from culture to history and politics, he is also the author of the Europe Trilogy, celebrated spy thrillers whose latest volume, Time of Exile, was recently published by Punto Press. His latest book is the essay anthology Babylon Falling: Essays About Waning Qualities and Studies of Failing Empires (Punto Press, 2017).

The newly formed eurosceptic government in Italy has sent a tough message for illegal immigrants coming to the country. The minister of the interior Matteo Salvini, also described by many as ‘Italy’s answer to Trump’, says ‘it’s time to pack your bags’. READ MORE: https://on.rt.com/96jp

After two weeks in power, Italy’s new governing parties are sticking to its campaign promises. The Interior Minister has closed a port to a vessel carrying migrants. The country’s new goal is to protect its borders, he says.

Italy Refuses To Receive Some 600 Migrants