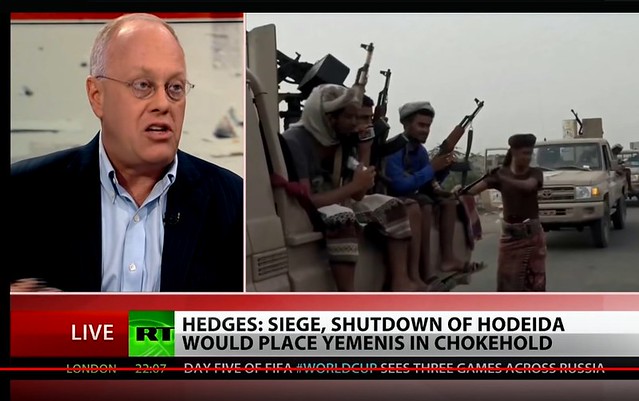 Yemen on the verge of famine as conflict intensifies

The conflict in Yemen there has left millions on the verge of famine as the Saudi led coalition ramps up its attacks on the Houthi stronghold in the port city of Hudaydah. RT America’s Manila Chan has the story.

The UN warns millions of Yemenis could starve as US-backed Saudi and Emirati forces attack Yemen’s port city of Hodeida. TRNN’s Ben Norton speaks with Medea Benjamin, who is campaigning to try to end the cataclysmic war.

The Moral Mask by Gregory Barrett

When Did Congress Vote to Aid the Saudi’s Yemen War? by Gareth Porter + Larry Wilkerson: U.S is Backing Saudi War Crimes in Yemen

How Casual The Slaughter, by Felicity Arbuthnot