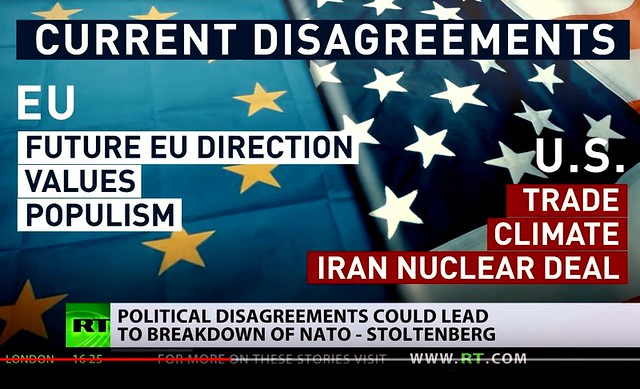 The US-led NATO military alliance earlier this month committed to a major escalation in force buildup on Russia’s western flank. The development underscores Russia’s long-held concern that the 29-member alliance is inevitably moving dangerously on a war footing.

At a summit in Brussels, June 7, defense ministers from NATO countries gave the go-ahead for a new, vast mobilization of troops, navy and air forces which would spearhead through eastern Europe up to Russia’s western borders. The initiative encompasses two new NATO command centers, one based in Norfolk, Virginia, on the US eastern seaboard, and the other at Ulm, in Germany.

The stated purpose is to expedite transatlantic coordination of NATO forces of up to 30,000 troops, 30 aircraft squadrons and 30 large warships, deployable within 30 days.

NATO chief Jens Stoltenberg said the plan was about “boosting readiness” for a major intervention. That “intervention” is undoubtedly referring to Russia, which NATO officials have continually accused of having aggressive designs on eastern Europe, in particular, the Baltic states and Poland.Recently, US Pentagon chief James Mattis accused Russian leader Vladimir Putin of trying to undermine America’s alliance with Europe. The war mobilization plans would, therefore, seem to be a way of trying to galvanize the alliance against a common enemy — Russia. Not that Russia is actually an enemy. It’s just a handy bogeyman for NATO to use as a unifying purpose.

Russia has consistently refuted claims that it has any offensive interest towards European neighbors. Moscow says such claims are absurd fantasies.

Even former Estonian President Toomas Hendrik Ilves, who is ardently pro-NATO, recently admitted that the Baltic region was not under any military threat.

But, as they say, don’t let facts get in the way of a good story. And this “good story” (actually lame story) told over and over by NATO and its defense industry think-tanks is that the Russian bear is honing its claws to devour Europe. That is why the Ukraine conflict, and earlier in Georgia, has been willfully distorted to such a degree — in order to demonize Russia and to give some badly needed substance to the otherwise ludicrous NATO scaremongering.

That non-story was meant to give a refresher wind-up to Western public fears that “evil Putin” and his “Soviet dreams” are alive and well in menacing the security of Europe.

Of course, rabidly anti-Russian politicians in Poland and the Baltic states are all too willing to indulge the charade of casting Russia as a villain. Earlier this year, in March, Poland signed a $5 billion deal with the Pentagon for Patriot anti-missile systems, advertised as “protecting” the country from Russian aggression.

So, what can be easily discerned here is that the NATO expansion in eastern Europe is a risible racket for boosting American and European arms sales. And lickspittle European politicians who play the game with gusto will end up getting future cushy jobs at NATO or its think-tanks, just like former Norwegian premier Jens Stoltenberg.

But there also seems to be something more sinister to the relentless NATO expansion on Russia’s western flank. Something more than racketeering for the military-industrial complex. This expansion has been going on since the end of the Cold War in 1991 when the Soviet Union ceased to exist.

Canadian-based war crimes lawyer Christopher Black believes that the years-long pattern shows that the US-led NATO alliance is operating on a systematic, ideologically-driven war plan against Russia. In his view, the latest announced NATO mobilization force is a serious step towards trying to antagonize Moscow into a conflict.

“I don’t think this is just taking the boys on a walk through the woods to exercise their legs, nor is it to spend money for the sake of it. The setting up of these new command structures is a major step in the preparation for the mass and rapid movement of men and material — a preparation for war against Russia.”

The lawyer goes as far as comparing the NATO buildup on Russia’s western front with the infamous offensive launched on the Soviet Union by Nazi Germany in June 1941, called Operation Barbarossa.

He points out that right now, 12,000 German troops are leading NATO war exercises in Lithuania as part of the alliance’s ongoing Atlantic Resolve maneuvers in eastern Europe. American, British and Canadian combat soldiers and armored divisions are now stationed permanently in countries on Russia’s border. The only precedent, says Black, to the present military buildup by NATO, is the notorious Nazi Operation Barbarossa, which was launched this very week 77 years ago.

“Hyping up claims about Russian nuclear weapons in Kaliningrad and, more generally, allegations of aggression towards Baltic countries appears to be part of a Western media propaganda campaign for false-flag provocations against Moscow,” says Black. “We have seen countless such provocations, including the Skripal poisoning affair in England and claims about chemical-weapons atrocities in Syria.”

The question is: why now? Why is the NATO machine apparently cranking up in war mode against Russia?

“It is not necessarily connected directly to other conflicts but is indirectly part of the overall pressure being applied against Russia along the line from the Baltic, through Ukraine, Georgia, Armenia, Iran, Iraq, Syria, and so on. That the NATO failures in Syria and Ukraine may have accelerated this I cannot deny, but I think this was in the planning in any event, unless Russia rolls over and plays dead.”

It does seem significant, however, that cardinal setbacks for covert wars by NATO members in Syria and Ukraine are a factor in why the alliance appears to be upping offensiveness elsewhere against Russia — on Russia’s western doorstep.

The intervention by Russia in Syria was a decisive event in stopping the US-led regime-change war against President Assad. Given that scheme was a pivotal gambit by the US and its allies in the geo-strategically vital Middle East, one can deduce that Russia’s military success was not taken pleasantly by imperial planners.

It should be added too that it’s conceivable some Western political leaders are unaware of the dangers NATO is pushing towards Russia. Some politicians might even declaim such notions as nonsense.

For example, US President Trump is planning to meet Vladimir Putin in the coming weeks. The American leader may genuinely want to hold a meeting with Putin in order to normalize relations between the US and Russia. Trump may well be uninformed about NATO’s increasingly aggressive poise towards Russia. In short, the belligerent dynamic is out of his control.

NATO is a machine, a system of war, impelled by war profits and a deep-seated ideology of conflict and in particular Russophobia. It should be disbanded.

Indeed, Trump holding a friendly meeting with Putin could be just the sort of incident that incites the NATO warmongers further.

Shaken Alliance: The US, EU and NATO

NATO Secretary General Jens Stoltenberg was in London today to shore up the alliance. NATO has been rocked in the past two years since the Trump presidency Stoltenberg said there are real disagreements among partner countries to discuss the future of NATO and how this could affect the security and prosperity of the European Union, RT America’s Natasha Sweatte is joined by historian and author, Jeremy Kuzmarov.

Political disagreements could lead to breakdown of NATO – Stoltenberg

The NATO Secretary General is warning that political disputes and infighting risk tearing the international military alliance apart. But, at a speech in London, Jens Stoltenberg did insist that preserving NATO is in the interests of its 29 member states. READ MORE: https://on.rt.com/9857

Noam Chomsky: Why bother celebrating NATO at all? + Obama and Israel