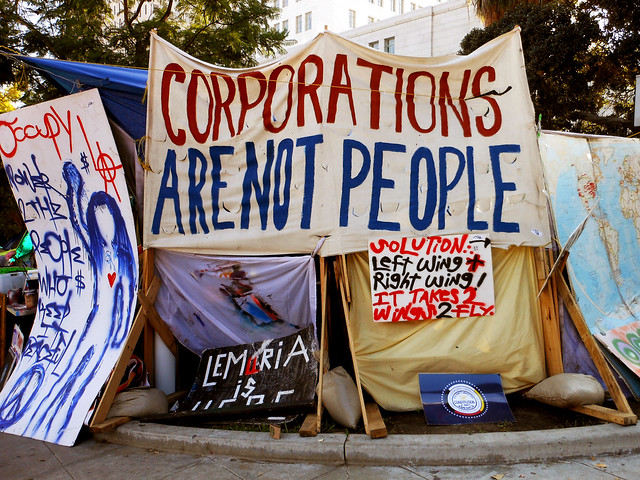 The Essays of The Man From the North by Rivera Sun
Writer, Dandelion Salad
Originally published Dec. 4, 2016
August 7, 2018

Corporate demons possess our nation’s soul. They crept in stealthily, full of trickery and deception, but now they’re lodged in place, as surely as if they had stormed our homes and halls of power with guns and tanks. Perhaps we’d recognize their coup if they had assassinated a flesh-and-blood president instead of merely stealing the souls of all our elected leaders.

A corporation is an invisible entity. It has no body to appear on television or slip into a congressional seat. It is the living, breathing human worshipers possessed by corporate greed who kill, maim, and destroy. For a lump of money, a human soul is bought and turned into the pawn of corporations. For a bribe or a salary, a human being averts their eyes and does the dirty work. For a sweet deal, a real life person decides to allow a corporation to injure and oppress, impoverish and harm.

There are millions of people railing against corporate power in our government, and rightly so, for corporations have stolen the souls of public office holders. They have corrupted the hearts of elected leaders. They have bought the obedience of senators and representatives, judges and sheriffs and presidents. But, the struggle is far vaster than just our political power-holders. It is not just a monetized, secularized, or politicized conflict. This struggle goes straight to the heart and soul of every man, woman, and child in this country.

Who is willing to be the first to evict corporate power from their heart? Among the citizens, who will expel the twin demons of our habituated consumer conveniences and corporate greed from our lives and pocketbooks. Who will decolonize their minds from the entertainment, advertisements, logos, slogans, and ideologies of the corporations? Who will refuse to bring one more purchase of the corporate overlords into his or her house? When the early American colonists were rebelling against the British, they sacrificed the luxuries of imported British cloth, tea, and more. Young girls wore dresses of homespun cloth to the old-fashioned versions of the prom. Among the modern Americans, who is willing to sacrifice our ease, convenience, consumerism, in favor of freedom from political injustice, diversity in our economy, and economic justice?

If we want to evict corporations from Capitol Hill, we are going to have to evict them from our own lives in ways that will not be easy. We will have to sacrifice. We will have to make do and do without. We will have to pay more for the product from a local, small, or independent company that does not have the same economic advantages as mega-corporations who enjoy tax breaks and subsidies, the ability to pay unjust wages unchallenged, the luxury of externalizing the true costs of their products, the insider industry deals on shipping and bulk product purchasing, and much more.

But each time your heart balks at a sacrifice, look at the horizon of possibilities. Fix your eyes on the vision of what we’re working toward … it is far greater than the sacrifices we face. We are striving toward functional democracy that represents, cares for, nurtures and sustains the whole of the populace, not just the ruling elite and corporate profit. We are working toward economic justice and vibrant, diverse, local, small, and independent businesses that have a fair and level playing field. We are moving toward protection of our beautiful planet that keeps us all alive, renewable energy, and a world free of pollution and toxicity. We want political justice so that we can assure and maintain economic, cultural, racial, gender, and all other forms of justice. We want arts, culture, and entertainment driven not by monopoly and narrow agendas, but by the beauty and bounty of our diversity and many perspectives. The list goes on.

The possibilities on the horizon line of change are tremendous. Fix your eyes on them as we make changes in our own lives during the efforts to erode and evict corporate power and greed. Remember what we’re sacrificing for as we overthrow corporations from the halls of power of our country. We are struggling for the heart and soul of our nation … and we have a vision for which it is worth wrestling corporate demons until, at last, every man, woman, and child is free.

Tis the Season To Wage Boycotts by Rivera Sun