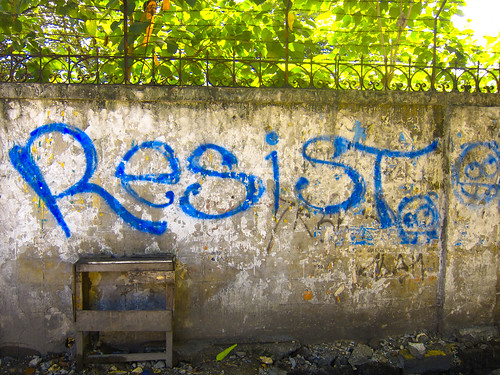 The Essays of The Man From the North by Rivera Sun
Writer, Dandelion Salad
Originally published Nov. 3, 2013
August 19, 2018

You must believe that pockets of resistance exist. As America plunges into darkness, some people burn with resistance like fires in the night, aglow with respect for the civil liberties that define the modern ideal of freedom. The quiet murmur of their impassioned voices will call to you as they discuss nonviolent strategy and struggle, but you will not be asked to join them until you strike the matchstick of your heart, build a fire of your determination, ignite the blaze of your courage, and reach out to others.

You must pull out those weathered, dog-eared books – the ones that you saved before the government banned them, the volumes that escaped the bonfires of the increasing authoritarianism of our corporate-controlled society. You must study them: Gene Sharp, Robert L. Helvey, and other scholars of strategic nonviolent struggle … and if you were not wise enough to collect these writers before the Freedom of Speech vanished without so much as a gasp of popular dissent, then you must take the pains to try and gather them now. Meanwhile, in these articles of The Man From the North, I will do my humble best to pass on the knowledge of how to topple tyranny from its throne.

I am not an expert like Gene Sharp, therefore, I ask you to weigh my suggestions on the scale of your own reason. Accept nothing without examining it with the knife of your own mind. Sharpen the edge of your intellect and dissect all strategies and proposals. By this, I do not mean the opinionated arrogance that rejects all notions but one’s own. (Indeed, one’s own strategies must be submitted to the sharpest critique of all.) What I ask of you is to be a good friend, one who values the thoughts of another and will acknowledge the strengths and weaknesses of his or her friend’s proposal with determined compassion. The stakes are high and great wisdom is required.

We are not playing with toy soldiers or video games, my friend. Resistance is a word that encompasses human hearts, blood, sweat, tears, families with small children, the elderly, the frail, and the tender hopes and dreams of all. The fabric of society – woven from those we know and love – is on the operating table. We are surgeons with scalpels in hand, trying to remove the spreading cancer of injustice, corruption, and tyranny. Cut carefully. Casualties are not numbers; they are faces with names. People are not profits; they are the immeasurable potential of the future. This is why we must commit to struggle … and also proceed with great care. Be a good friend to me, and to all others: lend me your wisdom, and I will lend you mine.

Gather your good friends and pull out the books of those who detail the strategies of nonviolent struggle. Everything we have been taught about such struggles has been warped and twisted with falsehoods. Nonviolent struggle is not passive … nor is it ineffectual. It has toppled dictators around the world and succeeded more often than violent uprisings. The corporate regime that currently controls our textbooks, our newspapers, our popular media and entertainment perpetuates misinformation about such struggles. They would have you believe that Rosa Parks got tired one day and refused to give up her bus seat.

That is a lie.

Rosa Parks was deeply trained in strategic nonviolent struggle, as were the other Civil Rights activists who planned the Montgomery Bus Boycott long in advance of its eruption. But this is not taught in schools, for it would empower children to know the means to end oppression. The Rosa Parks story is just one example of the mountain of false perceptions that are perpetuated by the empowered elite. They fear strategic nonviolent struggle … and rightly so.

Strategic nonviolent struggle draws its strength from an undeniable truth: governments rule by the consent of the governed. Such cooperation may be willing or coerced, but without our support, the government cannot operate. We prop up injustice by complying with laws, providing our skills and services, showing up at our jobs, and giving tyranny the full benefit of our compliance. The American Declaration of Independence clearly outlines this, along with a call to moral responsibility:

“… Governments are instituted among Men, deriving their just powers from the consent of the governed, that whenever any Form of Government becomes destructive of these ends, it is the Right of the People to alter or to abolish it.”

This time has come.

Gather your good friends, pull your dog-eared books from hiding, and begin to study and strategize. Tyranny can – and will be – toppled. Here is how it will be done.

– Let us remedy our ignorance of the tools of nonviolent strategy and learn the sensible application of these tools. Let us study diligently, as if we had been asked to build a skyscraper and, not knowing whether circumstance shall call upon us to lug concrete or draft the blueprints, let us prepare for whatever may be required.

– Since no blueprint for ending tyranny in our country has been shown to us, let us begin drafting many designs in small groups with our good friends, seeking out still others with whom we can compare notes. Acknowledging our own ignorance and lack of experience (for who among us has successfully removed tyrants from power?), let us use the assistance of others to rout out the weaknesses of our designs and revise them to increase their strength.

– Let us exercise caution, but not fear, as we reach out to others. Not all who profess to be good friends will be what they claim. Some will be agents of our opponents; others are bitter humans who would tear the joy from a child and trip elderly people out of spite; still others suffer from despair and in their despair would smother out all chances of success. But let us be open with our knowledge, unless, for strategic reasons, it is absolutely necessary to conceal it. Secrecy is a double-edged sword. It can suffocate resistance movements like ours that depend on broad support of the populace. Let us use anonymity before secrecy. Tack your strategies anonymously to telephone poles if you must, but do not withhold much needed knowledge from the people. They hunger for hope. They starve for solutions. As often as possible, we should reach out and remind others that resistance is not only possible, it is happening in our own communities.

– Let us use an ounce of patience and a pound of precaution to prevent a ton of foolhardy actions from causing losses of life and limb. Let us take the time to study and strategize now, so that when we move into action it can be with great certainty, commitment, and determination. All dictatorships have weaknesses. We must study the Achilles’ Heels of our corporate-political regime and strike wisely. They are strong and we are weak. We must use time and strategy to shift this distribution of power. Let us sway the social institutions and the populace to shift allegiance. Oppressive regimes can fall quickly, but only when their pillars of support have been eroded through persistent resistance.

– Let us plan for success by crafting not just a blueprint of strategy, but also a vision of what should follow. Such a vision for the future should evoke not just our long-buried, wild dreams, but also our nuts-and-bolts pragmatism. Without a well-crafted plan, the power vacuum opened by our struggle may be quickly filled by a coup d’état or an even harsher regime.

This last may prove equally – if not more – challenging than strategizing a plan of resistance. In a nation as diverse as our own, the desire to be free of tyrannical control may be widely shared, but the vision of a better world will take many shapes and forms. Compounding our differing views is a legacy of dispute. We, the people, carry many layers of prejudice and suspicion that the elite – both liberal and conservative – has fostered in us. But, since our arguments and dogmatism serve to their advantage, let us remove that source of their power by reviving the art of respectful discourse. If we seek our liberty from tyranny, we must exercise both the rights and the responsibilities of a civil, democratic society: the right to speak and the responsibility of listening; the right to our beliefs and the responsibility to allow others their views; the right to work toward our goals without fear of violent repression and the responsibility of ensuring that same freedom for even those we disagree with.

This list goes on. With liberties come responsibilities, for human beings are an interconnected species, and true freedom is found not in isolation, but in concert with others. At times such as these, the deep strands of our connections weigh heavily and tyranny binds cruelly with the weight of unjust laws and state-sanctioned violence. But, by working together to articulate a strategy for liberation and a vision that encompasses our rights and responsibilities to each other, we can lift the iron shackles of oppression and break free. Together, we can create a civil society that respects freedom for all without sacrificing the rights of the many for the privileges of the few. Such liberation has been achieved in other countries. It will be achieved in ours. So, get out your books, gather your good friends, and let’s get to work.

MFTN: Poverty Will Kill More Of Us Than Terrorism

16 thoughts on “Liberty and Strategy for All”