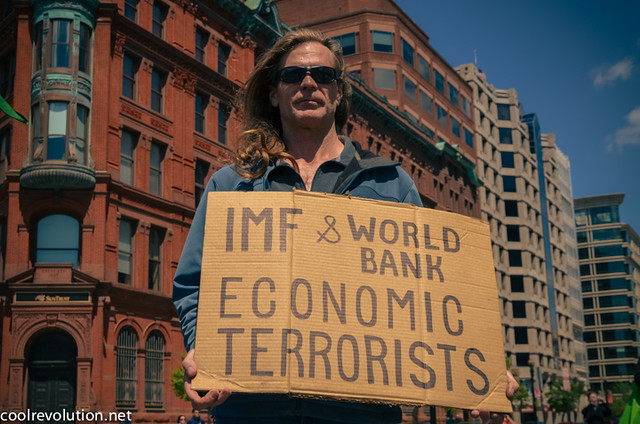 Ethiopia’s new Prime Minister Abiy Ahmed is moving quickly to open up the strategic Horn of Africa country to Western capital. But far from the move being seen as a progressive reform, many Ethiopians and observers are concerned that the new direction is leading the nation into “debt slavery”.

That is particularly poignant for Ethiopia which stands alone as the one African nation never historically colonized by foreign powers. Such proud history of independence could be soon lost.

In a long-overdue press conference earlier this week, premier Abiy trumpeted with self-congratulation that the East Africa nation was to receive a $1 billion loan from the US-dominated World Bank.

Abiy (42), who took office five months ago, didn’t specify what the money would be invested in. He claimed it would be used to facilitate “reforms”. Previously, the prime minister has vowed to open up state-owned companies to foreign investors. Those companies include telecoms, the national airline, electricity and water-supply utilities.

Only two days after the World Bank news, Abiy then announced that the state-owned company involved in the construction of a flagship hydroelectric dam is to have its contract terminated.

He cited “delays” in operations by the Metals and Engineering Corporation (METEC) as the reason for the abrupt sacking.

However, the official complaint of inefficiency and delays seems questionable, since the dam’s construction was, according to its former chief engineer, going forward on schedule, being 60 per cent complete, seven years from its inception. The $4 billion dam will be Africa’s largest hydroelectric scheme. Up to now, it has been self-financed by the Ethiopian state relying solely on public savings from its 100 million population.

METEC reportedly said that it was not aware of any complaint from the prime minister’s office until the contract was suddenly terminated this week. Given that the firm is state-owned and unique, the suggestion now is that the contract will be awarded to a foreign engineering company. The dam already has an Italian firm, Salini, as the leading project management. But the question is: who will be the replacement for the Ethiopian METEC firm?

This is where the timing of the new World Bank funds earmarked for Ethiopia is suspicious. Those funds are likely to go into the coffers of a foreign contractor appointed to replace METEC. But it will be the Ethiopian nation that is saddled with paying off the “loan” – a debt which up to this juncture it has not had to contend with.

Former World Bank economist Peter Koenig, who has since become an ardent critic of the institution and how it operates, says that the $1 billion figure for a developing economy like Ethiopia is “astronomical”. The country’s gross domestic product is around $80 billion.

“This will lead to debt slavery,” said Koenig. “All money from Western-controlled financial institutions like the World Bank and International Monetary Fund is to be avoided at all costs. Their lending of money is simply a cynical way for Western capital to gain control over national economies.”

He added that this is no doubt why premier Abiy is given glowing coverage by Western news media. “He’s a willing accomplice to Western financial takeover,” says Koenig.

By contrast, critical Ethiopian political sources say that it was for this very reason that the former leadership of the country under the late Prime Minister Meles Zenawi sought to block Western capital gaining access to its development plans. Ethiopia’s Grand Renaissance Dam was up to now totally financed by national savings, while other major infrastructure projects, such as telecoms and transport, were partnered with China through soft loans and grants.

Since Abiy Ahmed took over as prime minister in April this year, the former ruling coalition government of the Ethiopian People’s Revolutionary Democrat Front has undergone a radical shift in terms of moving from its previous policy of national independence to one of welcoming Western capital. Also part of that shift is that the new prime minister has embraced Washington’s Arab allies in the region, in particular Egypt, Saudi Arabia and the United Arab Emirates.

This geopolitical shift is happening without a national consensus or even debate, and is causing sharp ethnic tensions in widespread parts of Ethiopia, with dozens of deaths from violent clashes in recent weeks.

Western media typically report that Premier Ahmed is meeting resistance to his supposed “liberal reforms”. But there are also suspicions that the violence has been instigated by the new ruling faction dominated by the PM’s Oromo ethnic group, as a way to justify security crackdowns and to install regional administrations amenable to the political objectives of the central authorities in the capital Addis Ababa under the prime minister’s control.

A sinister sign of this shift-by-stealth came with the shocking assassination on July 26 of the chief engineer responsible for overseeing the Grand Renaissance Dam. Simegnew Bekele (53) was shot dead with a bullet wound to his head, apparently while sitting in his parked car in Addis. There are strong indications that his murder was a political assassination. Engineer Bekele was a consummate professional who was widely revered for his dedication to the dam. He was also committed to the original vision of the project being completed without foreign investment. Bekele was appointed by the former PM Meles Zenawi in 2011 to see the project through to completion.

The dam has long been protested by Egypt, which fears that it may reduce the flow of water in the Blue Nile that is critical for its agriculture. For years, Egypt has been bickering with Ethiopia about the dam.

In June, Ethiopia’s Abiy made his first foreign trip to Cairo where he was warmly received by President Abdel Fattah el Sisi. There was a remarkable change of position, with the Ethiopian leader giving assurances that the dam would be delayed to suit Egypt’s interests. Ethiopian sources noted how the PM recited a Muslim prayer to the Egyptian leader by way of giving assurance.

For a project that was viewed by many Ethiopians as a source of immense national pride, the seeming capitulation to Egyptian concerns caused much consternation. The project manager Simegnew Bekele in particular was said to be perplexed by the abrupt interference in his technical authority, according to sources.

The assassination of Bekele can therefore be plausibly seen as the elimination of a difficult political obstacle to those who want to see the dam delayed or its strategic financing altered.

On the morning that the engineer was killed, Prime Minister Abiy flew out of Addis for a week-long trip to the US. Social media posts from the delegation on board the Ethiopian Airlines plane showed people celebrating. News of the engineer’s death would have no doubt been known by that time. Incongruously, it was later said the celebrations were for a birthday party for somebody among the premier’s delegation to the US.

The shocking murder of a beloved national figure was compounded with the seeming insensitivity of the prime minister. He ignored a public outcry in Ethiopia for him to return immediately from the US to condole with the nation on the barbaric slaying of chief engineer Bekele. The prime minister did not even return for the funeral which was held in Addis on July 29 in what was a day of national mourning.

Bizarrely, Abiy Ahmed has since shown little concern about apprehending the perpetrators of the murder. His public comments are markedly rambling and vague. The Addis police chiefs appointed by the PM also seem grossly incompetent and indifferent.

During his week-long tour of the US, Abiy was greeted by Vice President Mike Pence and high officials belonging to the World Bank and IMF, including Christine Lagarde.

The latest announcement of a $1 billion loan from the World Bank also preceded the visit to Addis Ababa this week by the Egyptian foreign minister Sameh Shoukry and his country’s head of intelligence Abbas Kamel. The visit was openly reported as being for the purpose of talks specifically about the dam project. It was the next day that premier Abiy announced that the contract for the state-owned Ethiopian firm involved in the dam’s construction was to be terminated.

What Ethiopian political sources say is that the country is undergoing a long-held plan for a geopolitical takeover. The nation, which was seen up to now as an African role model for independent development, is being shifted from its erstwhile independence and partnership with China to become a client of Western capital and Washington’s regional allies among the Arab states.

The country is being subjected to a coup in all but name. Abiy Ahmed who has a background in military intelligence is suspected of being a CIA asset, having worked secretly in the past with Eritrea and Ethiopian dissident groups such as the Oromo Liberation Front based in the Eritrean capital, Asmara.

His stellar rise to power was not through election but rather through opaque parliamentary maneuvering. Having gained power, Abiy has rapidly directed the country towards serving the strategic interests of Washington and Arab clients. He and his new ruling faction are opening the dam gates for Western financial subjugation – euphemistically hailed as “reforms” in the Western news media.

Ethiopia in Turmoil of US, Saudi-Backed Coup, Not Reforms by Finian Cunningham

Graham Peebles: A Time of Hope for Ethiopia

Their Tyranny is Coming to an End by Graham Peebles

The People are Continuing to Demand Freedom, Justice and Democracy by Graham Peebles