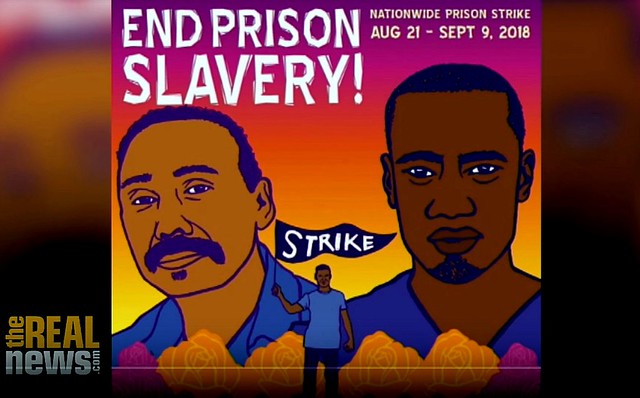 Prisoners organized through prison walls to strike, demanding an end to work with no pay, voting rights and for rehabilitation, training, and Education Programs. Pastor Kenneth Glasgow, President of the Ordinary People Society talks about the prison strike.

Prisoners Across US & Canada go on hunger and work strike to protest no wages/low wages, end of solitary confinement, for education programs & an end to mass incarceration.

Prisoners Strike Across the U.S. and into Canada

Prisoners in at least 17 states are on strike, protesting the severely inhumane conditions in prisons. Three hundred inmates in Nova Scotia, Canada have also joined the strike. The strike began on August 21, the anniversary of the killing of George Jackson by prison guards in Soledad, California, in 1971, and is scheduled to run until September 9, the anniversary of the Attica prison rebellion in New York that same year.

The strike is taking place in kitchens, laundries, prison grounds – anywhere prisoners do work. By refusing to work, the strikers are trying to draw attention to the dire problems they face every day: the extremely low pay they get, the overcrowding, the treatment of inmates by guards and prison officials. But strikers’ demands also include greater access to rehabilitation and education, and changes in sentencing laws.

Prisoners are demanding that they be paid regular wages for the work they do. On wages as low as a dollar an hour, prisoners can’t even buy the most basic necessities. And when they are released, they have no money for their living expenses. Texas and South Carolina even allow companies to pay prisoners nothing for the work they do! No wonder prisoners call this slave labor – and they say they accept it only because sitting in prison doing nothing is worse.

In a great irony for those who like to claim they defend the U.S. Constitution, the 13th Amendment actually states that slavery is legal, when a person has been convicted of a crime.

Along with the strike, reports indicate that prisoners are organizing other actions, ranging from boycotting prison stores to sit-ins and hunger strikes. But it is difficult to get accurate information about specific actions and how widespread the prisoners’ movement really is, because prison authorities not only try to put a lid on news coming out of prisons; in some states authorities even deny strikes and other actions are taking place.

More “inside” actions in the National Prison Strike have been reported since the Aug. 28 roundup in Workers World. The strike was originally called by Jailhouse Lawyers Speak for Aug. 21 through Sept. 9. One key strike demand, “End prison slavery!” refers to widespread state and corporate exploitation of prisoners who receive no or little compensation for work. This slavery is still permitted under the 13th Amendment to the U.S. Constitution.

North Carolina – Despite denying prisoner protest or strikes to the media, the North Carolina Department of Public Services privately admits in its infraction forms that prisoners are being thrown into segregation for strike organizing. There are rumors from prisoners of strike participation at 11 North Carolina facilities, with confirmation of organizers being put in segregation in at least two prisons. (Incarcerated Workers Organizing Committee)

South Carolina – Prisoners are reportedly on strike in Broad River, Lee, McCormick, Turbeville, Kershaw and Lieber correctional institutions. The actions include widespread workstrikes, with only a few prisoners reporting to their jobs, and commissary boycotts. (Jailhouse Lawyers Speak)

Texas – In solidarity with the national strike, two prisoners in a Gulf prison messaged they are on hunger strike in segregation, as is Robert Uvalle in Michael Unit, Anderson County, who has been in solitary for most of his 25 years inside. (IWOC)

Indiana – Prisoners in the segregation unit at Wabash Valley Correctional Institution began a hunger strike Aug. 27, demanding adequate food and an end to cold temperatures in the unit. (IWOC)

Washington state – Twenty people detained at Northwest Detention Center were sent to segregation on Aug. 30 after they, and eventually at least 30 others, demanded an end to a new requirement that they stand up as the warden enters each pod. NWDC is a private immigration prison located in Tacoma. On Aug. 21, about 200 people at NWDC went on hunger strike in solidarity with the National Prison Strike; about 60 people continue to hunger strike into a second week. (NWDC Resistance)

2 thoughts on “End Prison Slavery! Prisoners Strike Across the U.S. and into Canada (Mega-post!)”