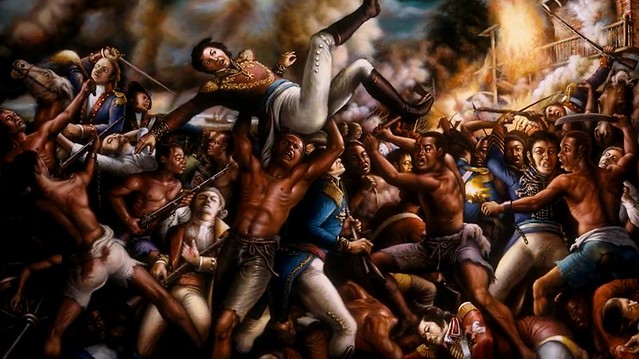 Murder Incorporated is a three-book series by Mumia Abu Jamal and Stephen Vittoria, which I can highly recommend based on the first book. The other two are not out yet.

Book One, “Dreaming of Empire,” is a critique of U.S. imperialism, a debunking of U.S. nationalist myths, a corrective or alternative history of the U.S. nation. Politically, a book like this would never be permitted in U.S. schools, and it’s clearly not aimed at clearing that hurdle. It uses curse words, which would provide a handy excuse for keeping it out. It’s also not straight history. It’s part chronological, part theme-based. It mixes historical accounts with pop-culture, with quotations from scholars, historical sources, and analysts interviewed by the authors.

Dreaming of Empire also does not try to leave the past in the past. Instead it proposes to explain current wars, the weaponization of outer space, and the rhetoric of contemporary U.S. politics through a myth-busting hard look at the past. And there’s little the U.S. public needs more. Indeed the authors seem to have concentrated on topics around which damaging myths have been constructed, including the glories and goodness of the Founding Fathers.

Reading here in Charlottesville, I’m struck by the extent to which local boys, Jefferson and Monroe (and the latter’s “Doctrine”), dominate this story. I wonder how many people realize that when a participant in a fascist rally here last summer drove his car into a woman and killed her, he was in that moment driving past the location of James Monroe’s first house here. I’m sure it’s more people than realize that Charlottesville is not a hotbed for fascists (they mostly come from elsewhere) but is a town that was founded by and which still prominently honors fascists avant la lettre.

The authors of Dreaming of Empire are smart enough not to call sacred founding fathers fascists as an idiot like myself might do. Instead they allow such fascists to convict themselves in their own words. Here we read John Winthrop thanking God for bringing deadly epidemics to native peoples, Benjamin Franklin crediting God with a plan to “extirpate” the “savages,” Jefferson advocating that tribes be “exterminated,” Jefferson likening African Americans to orangutans, and an Iroquois telling Washington to his face that women and children shudder at his name as that of a mass murderer, etc.

I think the focus on the founders of the fatherland as the creators of the Manifest Destiny demand for Lebensraum is entirely appropriate, even as the authors rightly trace the seeds of U.S. imperialism back to the British treatment of the Irish and the Spanish treatment of Jews and Muslims. I think, however, that a critique of World War II myths is even more necessary, and I hope one makes it into book 2 or 3. This book does, to its credit note the post-WWII globalization of the Monroe Doctrine. And I remain grateful to Mumia Abu-Jamal for his supportive review of my book War Is A Lie.

While the wars come fast and furious, there are at the moment many that are much better understood in the context of the history and the ideology illuminated in this book. The members of the so-called Democratic Party currently opposing diplomacy with North Korea or Russia and even trying to legislate a permanent occupation of South Korea cannot be fully understood solely through the lens of partisanship. Neither can the majority of U.S. senators who have openly voted for genocide in Yemen. The resistance to U.S. bases in Okinawa, the coups and attempted coups in Honduras and Nicaragua and Venezuela, the endless imperial outrages in Afghanistan and Iraq and Syria, the U.S. military expansion throughout Africa, the aggression toward Iran, the resistance to even nuclear disarmament, the attacks on international law — all of this, to be understood or stopped, has to be seen through the history of empire that long predates the current hegemonizing dotard in chief.

If I have any concern with this first book in its series, it is the same concern I have with many other books. Namely, this is a critique of violence that never gets around to explicitly advocating for the more powerful tools of nonviolence. The accounts of activism by the poor before, during, and after the American Revolution focus on violence. The Saint Patrick’s Brigade gets more attention than Henry David Thoreau. The Cuban Revolution gets extensive and familiar attention, while uses of nonviolence in El Salvador 1944 or dozens of other cases goes unmentioned. This bias is partially corrected by the book’s closing with details new to me about a peace activist, Malcolm Boyd.

To Hell With Manifest Destiny

A Terrible Normality by Michael Parenti