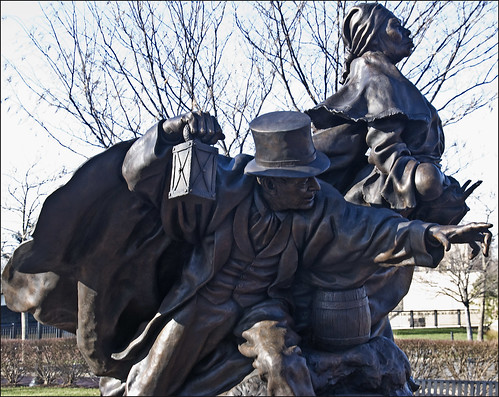 The year is 1854, a time when America struggled deeply with the issues of slavery. Harriet Tubman, known as “Moses”—a guide to freedom for slaves— learns of a dear friend in trouble.

In 1854, the Underground Railroad was, among other things, an extraordinary partnership across all of the lines that divided people in this country in the 19th century.

via A Christmas Journey to Freedom

It was a railroad like no other—a dangerous route from bondage to hope. Journeying along the famous Underground Railroad of the nineteenth century, countless African-American slaves escaped iron-fisted servitude in the South and found freedom in the North. Foremost among the Railroad’s “conductors” stood the figure of Harriet Tubman. Like Moses leading the children of Israel from Egypt to Canaan, the frail former slave woman guided hundreds to their own promised land, risking her life repeatedly so that others could be free.

The recipient of the 2010 Videographer Award of Excellence, “A Christmas Journey to Freedom” features acclaimed vocalist Wintley Phipps and actress Gwendolyn Briley-Strand as they reenact powerful, true stories of the Underground Railroad that will stir your soul. Journey with Joe (Phipps), a runaway slave, as he follows the courageous, faith-filled Harriet Tubman (Briley-Strand) to freedom in Canada. Including beloved songs such as “O Holy Night” and “Sweet Little Jesus Boy” sung by Wintley along with insights by historian Dr. Allen Callahan, this 71 minute video is perfect for the whole family at Christmas, and at any time of year.

15 thoughts on “A Christmas Journey to Freedom”