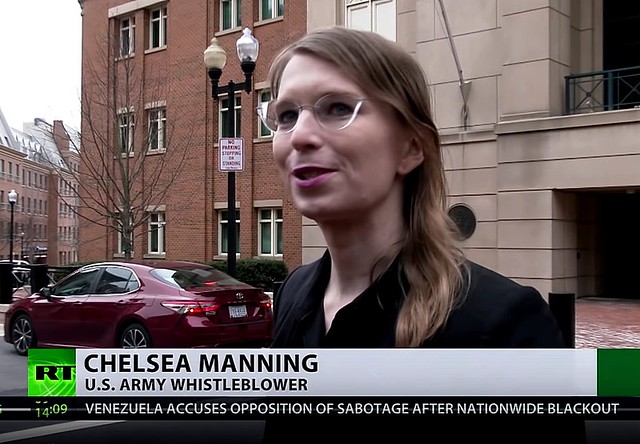 Chelsea Manning said her testimony before her court martial is all she has to say, standing by her resistance to secret grand juries as her activist ancestors did before her. Kevin Gosztola, Managing Editor of Shadowproof, discusses the case.

Former US Army intelligence analyst Chelsea Manning has been detained again for refusing to answer questions to a secret grand jury in connection with information she leaked to WikiLeaks in 2010. Investigative journalist Ben Swann explains to RT America’s Manila Chan what this might mean for Manning.

Chelsea Manning jailed after refusing to testify on WikiLeaks

US army whistleblower Chelsea Manning has been taken into custody for contempt of court after refusing to testify in front of a grand jury in what’s believed to be the case against WikiLeaks co-founder Julian Assange.

US army whistleblower Chelsea Manning has been taken into custody for contempt of court after refusing to testify in front of a grand jury in what’s believed to be the case against WikiLeaks co-founder Julian Assange. RT America’s Dan Cohen joins Rick Sanchez with the details.

Activists and supporters attempted to visit Chelsea Manning at the Alexandria Jail in Northern Virginia after she was held indefinitely for refusing to testify before a secret grand jury. A federal judge ordered Manning held indefinitely or until the Grand Jury finishes its investigation in 18 months.

Former army intelligence analyst and whistleblower Chelsea Manning remains behind bars after refusing to testify before the grand jury investigating Wikileaks in connection to the 2016 presidential race. She was behind one of the biggest leaks of classified documents in US history. RT America’s Trinity Chavez reports.

Chelsea Manning: We’re Living Under the Thumb of This Enormous Machine