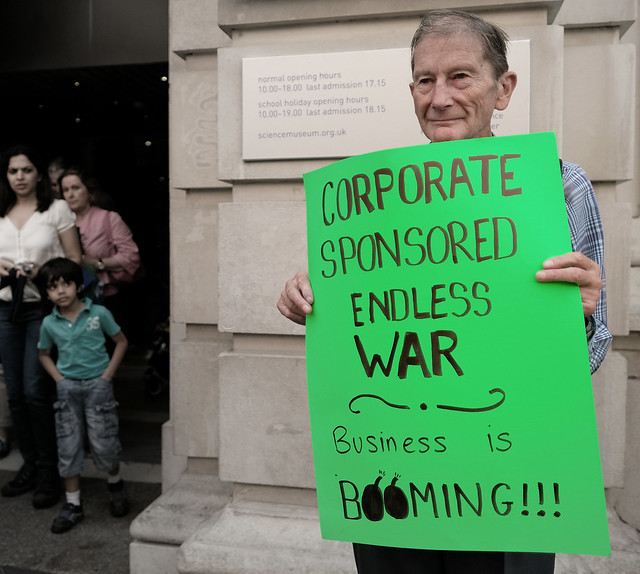 In today’s War Industry Muster, we analyze the special relationship that ties London and Washington, D.C.

The U.S. and U.K. militaries have a long history of operating and training together, even sharing military bases. Though there are defense pacts between London & Washington, D.C., the corporate underpinnings are far more integral to the special relationship. This relationship is a tragedy for both sides of the Atlantic.

It’s bad for the U.K. because it prevents London from charting an independent non-interventionist foreign policy, one that the people of the U.K. want desperately. Typically, the D.C. regime says “jump” and London says “how high?” This can be seen across the globe as London regularly orders the U.K. military, especially the British Special Air Service, to follow the U.S. Armed Forces into all types of U.S.-led wars: Afghanistan, Iraq, Somalia, Yemen—you name it.

The U.S. war industry is comprised of the corporations that develop, market, and sell weapons of war and related goods & services to the Pentagon and allied regimes.

The British Rolls-Royce Holdings sells a variety of aircraft engines to the War Department. Rolls-Royce engines and engineers propel U.S. Navy landing craft, Lockheed Martin cargo planes and aerial refuelers, the V-22 tilt-rotor aircraft (which is made by Textron and Boeing), the Northrop Grumman E-2D early warning aircraft, and Northrop Grumman drones. Rolls-Royce also regularly gets money from the War Department to research and develop the next generation of turbine technology for U.S. military aircraft.

BAE Systems is the most powerful war corporation in the United Kingdom. Its headquarters is a stone’s throw from Whitehall, the center of the British government. BAE is deeply tied to the U.S. war industry; BAE’s most productive facilities are located in the United States. (Most productive in terms of matériel output and financial revenue.)

In the United States BAE Systems sells its expertise to the War Department for:
– ship maintenance and repair
– aircraft devices, like chaff and countermeasures and identification friend or foe (IFF) transponders

Purchases go both ways across the pond.

You’ll see that BAE is involved heavily in ground-based and submarine-launched nuclear weapons for the U.S. Air Force and Navy. This goes both ways, as Lockheed Martin is part of the conglomerate that runs the British Atomic Weapons Establishment (AWE).

One of London’s major purchases from the U.S. war industry in recent years has been the Lockheed Martin F-35 Joint Strike Fighter, which is the most expensive weapon in history. In an effective democracy, the British public would have a say in the matter, weigh the fact that the F-35 is a costly, underperforming aircraft, and decline the purchase. But that’s not how Western “democracy” works. Matters of democracy do not interfere with matters of war profiteering.

U.K. and U.S. war corporations also operate together. For example, Data Link Solutions, a joint venture between the BAE Systems and United Technologies, produces communications equipment for aircraft and ships. (We analyzed such intra-industry cooperation in a previous episode of War Industry Muster.)

Another corporation binding the United States and United Kingdom is QinetiQ (pronounced: kinetic), spelled Q-I-N-E-T-I-Q. The U.K. once had an organization known as the Defence Evaluation & Research Agency, or DERA. DERA was the British military’s primary research and development wing. It was comparable to the U.S. Defense Advanced Research Projects Agency (DARPA).

In 2001, most of DERA’s work was corporatized and turned into QinetiQ. In the autumn of 2004, QinetiQ acquired a company out of Waltham, MA, named Foster Miller, which sells robots that help analyze and diffuse explosive devices.

QinetiQ now does a lot of work for the U.S. Department of War, including robotics, controllers for drones, and mission planning software. QinetiQ’s journey shows how neoliberal economic policies, like the privatization of government functions, helps expand the U.S. war industry. (We talk in greater detail about this in the Mergers & Acquisitions episode of War Industry Muster.)

I concede that there are other factors, like the financial sector, linking London with the D.C. regime. But war corporations play a huge role and are often overlooked.