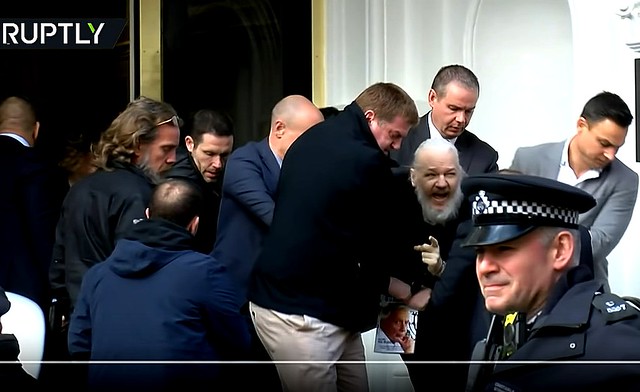 WikiLeaks founder Julian Assange has been evicted from the Ecuadorian Embassy in London where he has spent the last six years. Ecuador’s president has announced that the country has withdrawn asylum from Assange.

Assange has been arrested in relation to a US extradition request for "conspiracy with Chelsea Manning" for publishing Iraq War Logs, Cablegate, Afghan War Logs, precisely the persecution for which he was granted asylum under the 1951 Refugee Convention in 2012. @unhumanrights pic.twitter.com/i0TezO3SdK

Julian Assange did not "walk out of the embassy". The Ecuadorian ambassador invited British police into the embassy and he was immediately arrested.

URGENT: Ecuador has illigally terminated Assange political asylum in violation of international law. He was arrested by the British police inside the Ecuadorian embassy minutes ago.https://t.co/6Ukjh2rMKD

UK Metropolitan police confirm Assange has been arrested in relation to a US warrant. Assange lawyers confirm it concerns an alleged conspiracy with Chelsea Manning in relation to 2010 publications. https://t.co/oUZJT3XS3c

The action of the British police in literally dragging Julian Assange from the Ecuadorean embassy and the smashing of international law by the Ecuadorean regime in permitting this barbarity are crimes against the most basic natural justice. This is a warning to all journalists.

Henningsen: “It looks like a back room deal between Ecuador”

“It has all the indications of a back room deal between the Ecuador, UK and US governments” says Patrick Henningsen after British police reveal that Julian Assange was arrested on behalf of the US.

“He has been besmirched” says Neil Clark after Julian Assange shouts ‘UK, resist’ as he’s dragged out of Embassy of Ecuador, London by MET Police officers.

Exposing ‘collateral murder’ & mass surveillance: Why the world should be grateful to Assange.

WikiLeaks said it has discovered a spying operation against WikiLeaks founder Julian Assange inside the Ecuadorian embassy in London and that images, documents and videos that were collected were then offered for sale in an extortion attempt, during a press conference in London on Wednesday.

“WikiLeaks uncovered an extensive spying operation against Julian Assange within the Ecuadorian embassy,” said Wikileaks Editor-in-chief Kristinn Hrafnnson. “We know that there was a request to hand over visitor’s logs from the embassy and video recordings from within the security cameras in the embassy, so we assume that this material, this extensive material that has been gathered, has been handed over to the Trump administration,” Hrafnnson added.

Surveillance images and videos of Assange inside the Ecuadorian embassy were shown during the press conference. One video was purported by Hrafnsson to show Assange receiving a medical visit.

“This is a severe breach of lawyer-client attorney privilege, and fundamentally undermines our ability to properly defend and provide a defence to Julian Assange,” human rights lawyer Jennifer Robinson said.

The greatest traitor in Ecuadorian and Latin American history, Lenin Moreno, allowed the British police to enter our embassy in London to arrest Assange.
Moreno is a corrupt man, but what he has done is a crime that humanity will never forget. https://t.co/XhT51MA6c6

The weakness of the US charge against Assange is shocking. The allegation he tried (and failed?) to help crack a password during their world-famous reporting has been public for nearly a decade: it is the count Obama's DOJ refused to charge, saying it endangered journalism. https://t.co/xdTQ8xauB0

10 Reasons Assange Should Walk Free by David Swanson + Daniel Ellsberg On Assange’s Arrest: The Beginning of the End For Press Freedom 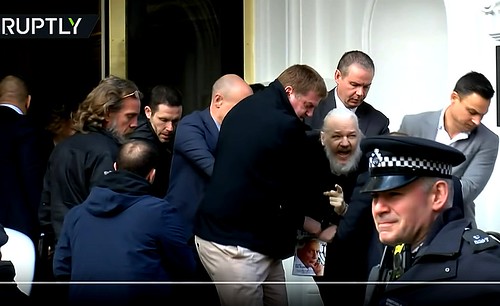