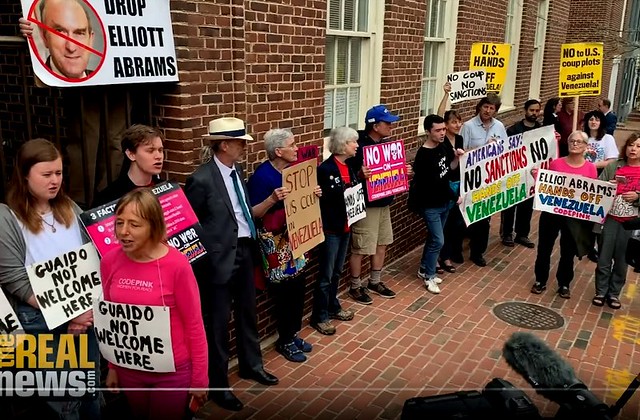 Venezuela’s Embassy: Activists vs. US Government

Activists defending the Venezuelan Embassy in Washington, D.C. are ready for a long battle, laying the groundwork for legal challenges as the Trump administration’s Elliot Abrams issues warnings against them.

An “Embassy Protection Collective” of US activists are continuing to occupy the Venezuelan embassy of Washington, DC in order to prevent its seizure by officials loyal to the US-backed opposition leader Juan Guaido. They demonstrated in front of the Venezuelan embassy in Washington, DC and say that they will risk arrest rather than leave the embassy. They are there with the permission of the Maduro government and insist they are breaking no laws. RT America’s Michele Greenstein reports for the News with Rick Sanchez.

Activists who are part of the Embassy Protection Collective have occupied the inside of the Venezuelan embassy for two weeks in an attempt to prevent US Secret Service from seizing the diplomatic building and handing it over to representatives of opposition leader Juan Guaido. Meanwhile, a special session took place at the Atlantic Council, a DC-funded think tank to discuss the future of Venezuela. RT’s Rachel Blevins has the story.

Tell the State Department: Guaidó’s people may not illegally take over the Venezuelan embassy — Codepink

Greg Palast: Koch Brothers Behind US Coup In Venezuela